15 Logical Fallacies to Know, with Definitions and Examples 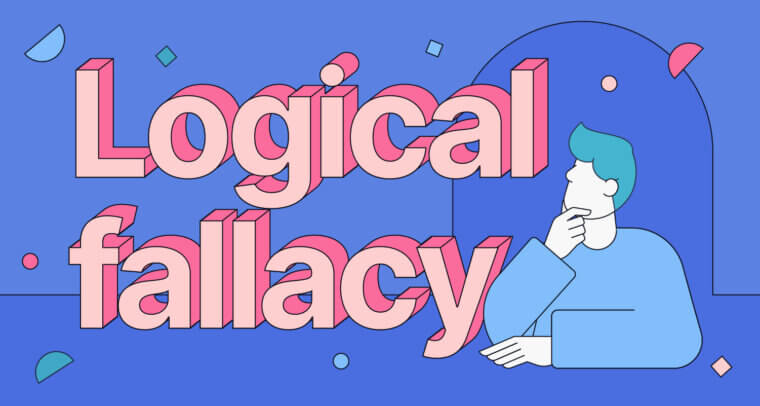 You’ve seen them on social media. You’ve heard them in movie dialogue. Heck, you’ve probably even used them yourself.

They’re logical fallacies, those not-quite logically sound statements that might seem solid at first glance, but crumble the moment you give them a second thought.

Logical fallacies are everywhere. Once you know how to recognize them, you’ll notice just how common they are—and how they can undermine the point their writer is attempting to make. Being able to identify logical fallacies in others’ writing as well as in your own will make you a more critical thinker, which in turn will make you a stronger writer and reader.

Say what you mean
Grammarly helps you communicate efficiently

What is a logical fallacy?

Compare the following two disprovable arguments. Only one of them contains a logical fallacy:

Can you spot the logical fallacy in the second argument? It’s a slippery slope fallacy, a position that claims that very specific consequences will follow an action. Although both statements can be proven wrong by going outside without a coat and staying perfectly healthy (and by pointing to the proven fact that the only way to catch a cold is to be exposed to a virus), the first one is simply incorrect, not logically flawed.

The history of logical fallacies

Logical fallacies are likely as old as language itself, but they were first recognized and cataloged as such in the Nyāya-Sūtras, the foundational text of the Nyāya school of Hindu philosophy. This text, written somewhere between the 6th century BCE and the 2nd century CE and attributed to Akṣapāda Gautama, identified five distinct ways that an argument could be logically flawed.

Today, our understanding of logical fallacies comes from these sources as well as contributions from later scholars like Richard Whately and Francis Bacon.

Where can I find logical fallacies?

You’ll find logical fallacies just about anywhere you find people debating and using rhetoric, especially in spaces that aren’t academic or professional in nature. In fact, we can almost guarantee that you’ve encountered logical fallacies on social media, especially in the comments under divisive posts. But keep in mind that they can and often do appear in academic writing, especially in the kinds of writing where the author has to defend a position, like argumentative essays and persuasive writing. They can even show up in expository writing.

Logical fallacies aren’t restricted to just one age group, political affiliation, gender, race, religion, subculture, or other shared characteristic—they’re universally human. Our brains aren’t perfect, and even smart people can fall prey to making logically inconsistent statements and arguments. Usually, people make these kinds of statements because they haven’t taken the time to think through them logically, not because they intend to make flawed arguments. But in some cases, the writer or speaker does intend to make a flawed argument, usually in an attempt to sway readers’ opinions or make their opposition look worse.

The best way to avoid making logical fallacies in your own writing is to familiarize yourself with them and learn how to recognize them. That way, they’ll stick out to you when you’re reading your first draft, and you’ll see exactly where your writing needs thoughtful revision.

What are 15 common types of logical fallacies?

As you’ll see below, there are a lot of ways an argument can be flawed. Take a look at fifteen of the most commonly used logical fallacies.

An ad hominem fallacy is one that attempts to invalidate an opponent’s position based on a personal trait or fact about the opponent rather than through logic.

Example: Katherine is a bad choice for mayor because she didn’t grow up in this town.

A red herring is an attempt to shift focus from the debate at hand by introducing an irrelevant point.

Example: Losing a tooth can be scary, but have you heard about the Tooth Fairy?

A straw man argument is one that argues against a hyperbolic, inaccurate version of the opposition rather than their actual argument.

Example: Erin thinks we need to stop using all plastics, right now, to save the planet from climate change.

An equivocation is a statement crafted to mislead or confuse readers or listeners by using multiple meanings or interpretations of a word or simply through unclear phrasing.

Example: While I have a clear plan for the campus budget that accounts for every dollar spent, my opponent simply wants to throw money at special interest projects.

With a slippery slope fallacy, the arguer claims a specific series of events will follow one starting point, typically with no supporting evidence for this chain of events.

Example: If we make an exception for Bijal’s service dog, then other people will want to bring their dogs. Then everybody will bring their dog, and before you know it, our restaurant will be overrun with dogs, their slobber, their hair, and all the noise they make, and nobody will want to eat here anymore.

A hasty generalization is a statement made after considering just one or a few examples rather than relying on more extensive research to back up the claim. It’s important to keep in mind that what constitutes sufficient research depends on the issue at hand and the statement being made about it.

Example: I felt nauseated both times I ate pizza from Georgio’s, so I must be allergic to something in pizza.

In an appeal to authority, the arguer claims an authority figure’s expertise to support a claim despite this expertise being irrelevant or overstated.

Example: If you want to be healthy, you need to stop drinking coffee. I read it on a fitness blog.

A false dilemma, also known as a false dichotomy, claims there are only two options in a given situation. Often, these two options are extreme opposites of each other, failing to acknowledge that other, more reasonable, options exist.

Example: If you don’t support my decision, you were never really my friend.

With the bandwagon fallacy, the arguer claims that a certain action is the right thing to do because it’s popular.

Example: Of course it’s fine to wait until the last minute to write your paper. Everybody does it!

A circular argument is one that uses the same statement as both the premise and the conclusion. No new information or justification is introduced.

With the sunk cost fallacy, the arguer justifies their decision to continue a specific course of action by the amount of time or money they’ve already spent on it.

Example: I’m not enjoying this book, but I bought it, so I have to finish reading it.

An appeal to pity attempts to sway a reader’s or listener’s opinion by provoking them emotionally.

Example: I know I should have been on time for the interview, but I woke up late and felt really bad about it, then the stress of being late made it hard to concentrate on driving here.

A causal fallacy is one that implies a relationship between two things where one can’t actually be proven.

Example: When ice cream sales are up, so are shark attacks. Therefore, buying ice cream increases your risk of being bitten by a shark.

An appeal to hypocrisy, also known as a tu quoque fallacy, is a rebuttal that responds to one claim with reactive criticism rather than with a response to the claim itself.

Example: “You don’t have enough experience to be the new leader.” “Neither do you!”

Although this list covers the most commonly seen logical fallacies, it’s not exhaustive. Other logical fallacies include the no true Scotsman fallacy (“New Yorkers fold their pizza, so you must not really be from New York if you eat yours with utensils.”) and the Texas sharpshooter fallacy (cherry-picking data to support a claim rather than drawing a logical conclusion from a broad body of evidence).

Take a look at these examples and see if you can spot the logical fallacy:

These are just a few examples of common logical fallacies (appeal to hypocrisy, appeal to ignorance, and sunk cost, respectively) we encounter in everyday speech. Next time you’re listening to conversations or reading online discussions, think carefully about the arguments being made and determine if they fit into one of the fallacy categories listed above.

How to avoid using logical fallacies

The most effective way to avoid using logical fallacies in your work is to carefully think through every argument you make, tracing your mental steps to ensure that each can be supported with facts and doesn’t contradict other statements you’ve made in your work. Do this during the brainstorming stage so you can separate strong ideas from weak ones and choose which to include in your paper. Continue validating (and when necessary, invalidating) your ideas as you work through the outlining stage by noting the evidence you have to support your claims under each header.

Don’t just back up your claims, challenge them! Pretend you’re arguing an opposing position and you want to expose the flaws in your original argument.

If you come across logical fallacies in your writing, take time to reconstruct your positions so they’re logically sound. This could mean changing how you approach and explain your argument or adjusting the argument itself. Remember, using a logical fallacy doesn’t necessarily mean the idea being argued is incorrect—it could be an objective fact or a defendable opinion, but simply being presented in an illogical way.

What is a logical fallacy?

A logical fallacy is an argument that can be disproven through reasoning.

Why do people use logical fallacies?

People use logical fallacies for different reasons. In some cases, speakers and writers intentionally use logical fallacies in an effort to make their opposition look worse, to simplify an issue, or make their own position look superior. In other cases, people use them unintentionally, either because they haven’t thought their statements through or don’t understand why their arguments are logically flawed.