4 Memorable Quotes from Larry David That Will Make You Think 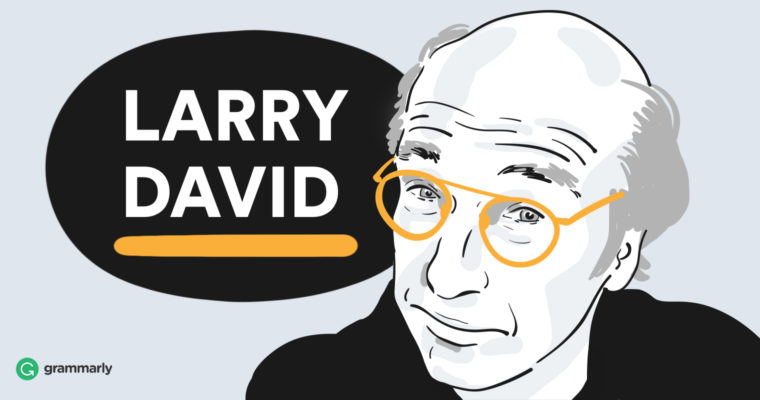 Comedy lovers rejoice! After a six-year hiatus, Larry David’s acclaimed comedy Curb Your Enthusiasm is returning to HBO on October 1 for its much-anticipated ninth season.

Not familiar with the irascible Larry David? Larry got his start doing stand-up in the 1970s and was briefly a writer for SNL. But he’s best known as the true genius (and head writer and executive producer) behind the beloved ’90s sitcom Seinfeld, one of the most successful shows of all time.

Curb Your Enthusiasm (in which Larry plays a fictionalized version of himself) has also enjoyed its share of accolades, including two Emmy Awards (out of thirty-nine nominations), and a Golden Globe Award (with five nominations).

So today we’re celebrating the return of Curb with some creative wisdom from Larry David himself.

1 Prioritize Your Own Standards

To be honest . . . I think the only thing that really worked in my favor, is that right from the beginning I really didn’t [care] whether or not [Seinfeld] was a success. That’s not to say I didn’t want to do good work, but I wasn’t about to let myself be judged by network standards. When you’re not concerned with succeeding, you can work with complete freedom.

Despite pressure from NBC to play it safe, Larry chose to stay true to himself and his vision and make the art he wanted to make. Instead of pandering to the bureaucratic overlords, he chose to create something that he was personally proud of, regardless of its reception.

By removing the pressure to achieve, and setting his creativity loose, he was able to create something which brought joy to hundreds of millions of viewers.

2 Don’t Be Afraid To Go There

On some viewers’ surprising response to Curb Your Enthusiasm:

. . . people told me after the show started airing that they had to leave the room for some scenes because they were cringing and they couldn’t bear to watch — it was like a horror movie — I had no idea it was having that effect on people.

That was a complete surprise to me, and I liked it. I liked that they couldn’t see it. But I never really gave it that much thought. I was just trying to do funny shows. I never felt I was going too far. I felt I was doing what I wanted to see.

If you’ve seen Curb, you’ll know just how painfully cringeworthy some scenes are. But even after Larry discovered his show was having this effect on people, he didn’t tone down what he was doing to make his audience more comfortable; he continued to push the envelope.

Not everyone will understand, appreciate, or be comfortable with the art you make—and that’s okay. Do the work you want to do. Your audience is out there!

3 Push Your Creative Boundaries, Even When It’s Hard

When I drove home every day, because we were improvising it, I’d think, “Would this scene be better if I’d written it?” And 98 percent of the time, I’d thought “No.” It was better improvised. You could just get to places that you couldn’t get to writing.

But the editing is really hard. Compared to a written show, where you’re doing two to three takes and they’re all the same. For this show, every take is different.

The dialogue of Curb Your Enthusiasm is mostly improvised by the actors (instead of scripts, Larry writes outlines for the show), and the results are hilarious. The process of getting to the final product may be difficult, but it’s absolutely worth it.

4 Your Perspective Can Be a Game Changer

On Larry’s conversation with Jerry Seinfeld where they came up with the idea for Seinfeld:

We were in a grocery store and talking about the different products on the shelves. And we were making each other laugh. Then we both realized that this is the kind of dialogue we never really heard on television, or even movies, for that matter.

Chances are many of your favorite TV shows and movies have dialogue that sounds natural, and may even sound similar to how you talk with your friends. But before Seinfeld hit the airwaves in 1989, that was rarely the case, and a show celebrating the minutiae of everyday life was unthinkable.

Just like Larry and Jerry realized there was something missing in entertainment, you might also see gaps in your field that no one else has filled before. You may feel like an outsider because of your perspective, but this can also be your strength if you’re willing to act on it.

Need to catch up on Curb? The first eight seasons are available to stream on Amazon Prime!