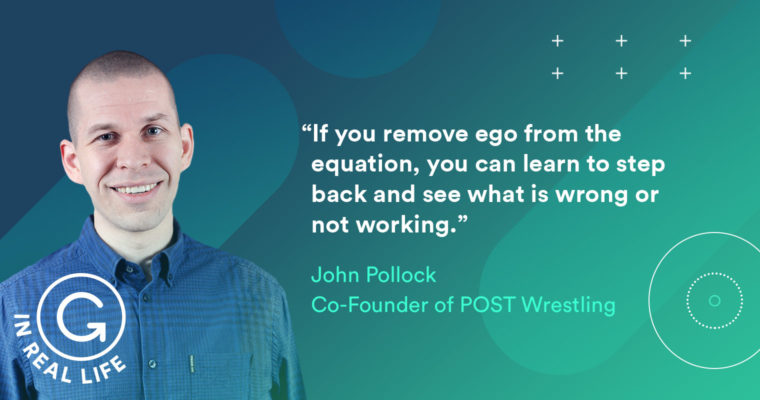 John Pollock lives and breathes pro wrestling. He’s not a wrestler himself, but he became interested in wrestling when he was twelve and has been covering matches for radio since he was nineteen.

After reporting on pro wrestling, mixed martial arts, and boxing for many years, the radio show he worked for got acquired by The Fight Network. Eventually, Pollock got let go by the network. But he and his colleague, Wai Ting, weren’t done reporting on their favorite sport.

On Christmas Eve in 2017, they launched POST Wrestling. Now, their podcasting and wrestling news network allows Pollock and Ting to talk about their favorite part of wrestling — the business.

The many faces of pro wrestling

While wrestling may conjure images of showy tricks and elaborate costumes, Pollock has always been interested in what goes on behind the curtain.

“It’s very much an intricate business to learn and if you study it deeply, you can apply it to many other businesses,” says Pollock.

For his first job covering the wrestling industry, he got the perfect job for any new writer with a passion.

“I would write daily updates for this radio show to drive traffic to our website. I had free reign on how to approach these topics and express my thoughts,” says Pollock. It was here that he learned the ropes and developed his voice.

“It would take me several hours every day to write them, but it was so valuable in learning more about what was going on in the industry,” says Pollock.

Through these years of experience, he’s learned about the industry’s quirks.

“Some people just look at wrestling as this goofy form of entertainment, but behind the scenes there are a lot of interesting dynamics that we are focused on covering,” he says. “For example, the WWE has recently struck these giant deals with Fox and NBC. So we look to understand what’s going on and why.”

With POST Wrestling, he and Ting are living their dream of covering wrestling their own way — several times a week.

“I’ve worked with a company for 13 years. Now my partner and I are 100% responsible for what we are doing.”

Being the owner, face, and voice for POST Wrestling requires excellent communication skills. For Pollock, that’s where Grammarly can help.

“Grammarly is an essential resource. It’s just right there and before I post anything now, Grammarly goes through my writing,” says Pollock.

“Grammarly picks up mistakes that I wouldn’t have caught. It’s also very compatible with the backend of our website so it’s really easy to use. It’s right there, unobtrusive, and saves time.”

Cutting through the bull

With the formation of POST Wrestling, Pollock and Ting can report on the parts of wrestling that they and their fans love. Currently, they produce four shows: a weekly show covering Monday Night Raw events, another weekly show on Tuesdays to cover miscellaneous items they couldn’t fit on Monday, a Friday show that covers wrestling history, and a monthly show to answer questions from followers. “We’re not just a website that wanted to put out as many stories as possible and optimize for clicks. We’re not as reliant on Google ads,” Pollock notes. In fact, their readers support them through Patreon.

Their fanbase is wide-ranging — the pay-per-view style of wrestling isn’t as much of a draw as it used to be, and some of Pollock’s regular listeners don’t tune in to weekly matches anymore.

“A lot of our listeners don’t watch the Monday Night Raw event, but they listen to our podcast to get a snippet and be nostalgic,” he says.

With POST Wrestling, Pollock is really out of his comfort zone. Now that he’s here, he’s got some words of wisdom about not falling into ruts. His main advice? Be humble.

“If you remove ego from the equation, you can learn to step back and see what is wrong or not working,” says Pollock.

POST Wrestling has just passed its first anniversary, and Pollock is thinking about the year ahead.

“This last year has been a big change in my life, but also one of the most enjoyable parts of my career. It’s still a work in progress, but I’m excited to see where it goes.”

How Nicholas Barrett Uses Grammarly to Share His Perspective

How Melody Wright Turned Her Debt Into Opportunity