Is Being a Perfectionist Really a Good Thing? 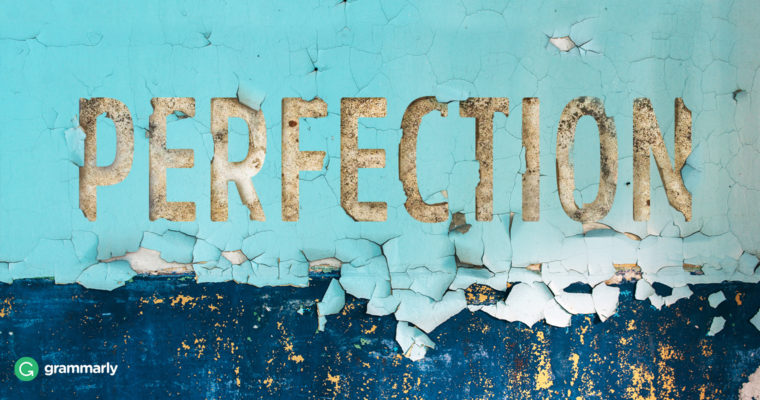 Perfectionism is the voice of the oppressor, the enemy of the people. It will keep you cramped and insane your whole life.

“I’m such a perfectionist!”

People sometimes utter that phrase with pride, wearing the title as a badge of honor, but I’ve never understood why anyone would think perfectionism is something to be pleased about. I’ve cried myself to sleep over a mistake, and I remember my embarrassing gaffes for years after everyone else involved has forgotten them. I’ve left two novels languishing, each over halfway complete, because my own writing is never good enough to satisfy me and I’m sure no one else will find it readable, either.

I’ve always found Holly Hunter’s character, Jane, in the 1980s classic Broadcast News infinitely relatable. She’s hard-driving, smart, and an absolute perfectionist, which makes her life as a Washington bureau network news producer challenging. On one hand, she’s insanely talented. On the other, she’s stressed to her breaking point and a pain to work with. In my favorite scene, Jane battles her boss over which colleague should anchor a breaking news story. She insists her choice is the only viable option. When her boss snarks that it must be nice to be the one who always thinks she knows best, Jane whispers, “No. It’s awful.”

I can say this with authority: there’s a difference between striving for excellence and perfectionism. One is an asset, the other’s a handicap.

We all know people with higher-than-normal standards, people who like to be right, people who are ultra-competitive and need to win. But are they all perfectionists? We tend to lump many different personality types and behaviors under the perfectionism label, but clinical perfectionism is a different beast. According to Merriam-Webster, the medical definition is:

Perhaps the key words in that definition are “unrealistically demanding.” Having high standards is fine. Striving for quality is admirable. But expecting nothing short of a flawless performance or outcome every time is a recipe for unhappiness. When failure to meet one’s own impossibly high standards results in a feeling of “personal worthlessness,” it’s clear why being a true perfectionist is as awful as Jane said.

Are you a perfectionist?

You might be, but whether or not it’s a problem seems to be both a matter of opinion and degrees. Mental health professionals can’t quite seem to agree on terms. Some believe that perfectionistic traits can be motivational, helping a person reach for excellence. Others argue that any level of perfectionism is problematic. At best, a tendency toward high standards can mean that a person will regularly produce quality work. At worst, expecting nothing short of perfection from yourself can have painful psychological side effects. Perfectionism might be a problem if:

Try to impress yourself, not anyone else

Experts have identified two types of perfectionism, a good kind and a bad kind. Those who try their best and expect themselves and others to do well, but who treat failures as learning opportunities rather than indicators of inferiority, are the good kind of perfectionists—achievers with high standards of excellence.

There’s nothing wrong with aiming high, but shooting for perfection should cause you to feel inspired, not anxious. In fact, research suggests that people who are motivated by a desire to please or impress others perform worse than those who simply set ambitious goals for themselves. If you drive yourself hard mainly because you’re worried others will see you as less-than-perfect, consider discarding impossibly high expectations and working toward getting good enough. Your quirks, and even your little mistakes, infuse your work with personality, so leave perfect precision to machines and remember that to err is human.