All the perplexing, unclear, and even contradictory quirks of the English language are a large part of what makes it interesting. These idiosyncrasies can make it frustrating sometimes, or fun and challenging if you adopt the right mindset, but we can agree that cutting through the confusion is an important part of learning any language, English included. But when you look at all those confusing words and rules, you might notice that some of them aren’t really confusing, which is the case with imbed and embed. The slight difference in spelling might suggest that these words have different meanings—but they don’t. 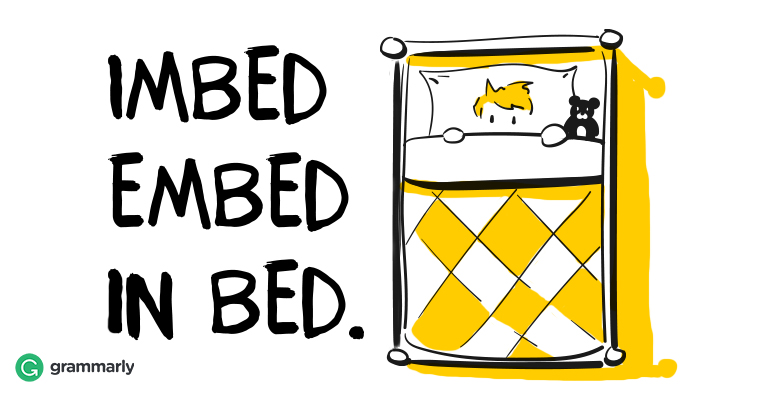 The Difference Between Imbed and Embed

For anyone looking for quick information, let’s state this right from the start: there is no difference between imbed and embed. They are just different spellings of the same word; there’s no difference in their meaning, and they are both completely correct to use. However, embed is a far more common spelling today, which is a fact that created the opinion that you can write “embedded” but you can’t write “imbedded.” You can write both, of course, or you can choose to use the embed spelling and its derivatives if you’re not too inclined to swim against the current.

Embed/Imbed and How to Use it

Embed, pronounced em-BED, or imbed, pronounced im-BED, is a verb that can be used in a couple of different ways: To firmly place something in a surrounding mass or environment: “To embed just a few lines of Shakespeare’s verse in a 15-year-old mind in the hope that at some point in the future it may detonate is still surely one of the noblest purposes of education.” —The Guardian “Imbedding shapes in handmade soap is nothing new. Simple geometric shapes are common. But Wild Mountain owners Mary and Phillip Peelish wanted to imbed a design much more intricate—the State of West Virginia.” —The Washington Times To make something an integral part of a larger whole: “But nowhere do policymakers or educators have ready answers about how to embed global competence in schools and learning.” —BBC “I share their obsession with authenticity and timeworn texture, two qualities I’ve labored to imbed in my own homes.” —The Observer

Embed and Imbed: The Origin of the Split

As you can see, examples of both spellings can readily be found online. It’s not that different in literature: “Billy, in fact, had a paperweight in his office which was a blob of polished amber with three ladybugs embedded in it.” —Kurt Vonnegut, Slaughterhouse-Five “As an act recedes into the past and becomes imbedded in the network of one’s individuality it seems more and more a product of fate—inevitable.” —Sylvia Plath, The Unabridged Journals of Sylvia Plath Evidence suggests that both spellings have peacefully coexisted since at least the late eighteenth century. The “imbed” spelling first appeared in print in 1778, while “embed” was found in a book from 1794. The prefix im- , which is used to form “imbed,” is a common substitution for the prefix in- when it’s attached to words that begin with “b” (imbue), “p” (impend), or “m” (immortal). In “imbed,” however, something else happens—the prefix im- replaces the prefix em-. The prefix em-, itself a substitution for the prefix en-, came into Middle English from Old French, and since the fourteenth century has been occasionally used instead of in- (im-). The substitution happens the other way around, too. That’s why today we have words like “enquire” and “inquire,” which have very little—if any—difference in meaning, even though they are spelled differently. In some cases, however, a difference in meaning did develop, as with “ensure” and “insure.” But for embed and imbed, the meaning remained the same, even though the spelling variant that starts with E has become prevalent.