What Is Ibid. and How Do You Use It? 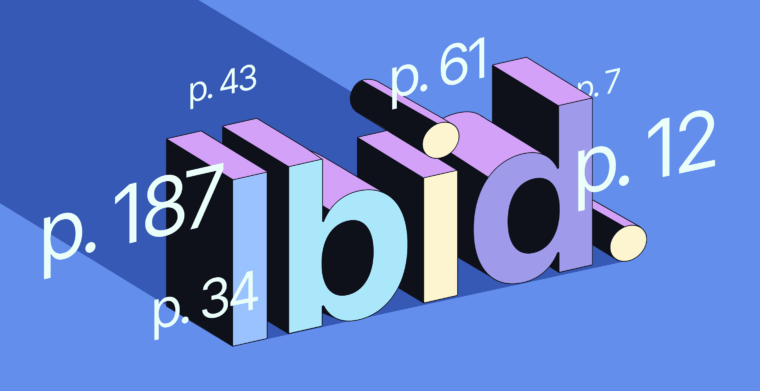 Sometimes, you use only a couple of sources in your paper. Other times, you use a lot of sources but end up leaning heavily on one or two of them—especially when they’re the best sources to support a specific section of your paper. When this is the case, it can be cumbersome to cite the same source in your footnotes over and over again.

Fortunately, if you’re writing in Chicago style and you reference the same source more than once, you don’t have to write out all the information about the source again. Chicago style includes guidelines for a handy abbreviation, ibid., that can save you a lot of time when you’re writing footnotes or endnotes.

Ibid. is an abbreviation of the Latin word ibidem, which means “in the same place.” It’s shorthand that makes it easy for you to acknowledge that you’ve already cited a specific source in full.

Ibid., pronounced ih-bid, is typically used in your work’s footnotes or endnotes. It tells the reader that a specific citation references the same source as the previous citation.

But you can’t use ibid. for just any repeated citation. According to the Chicago Manual of Style, you can use ibid. only in these instances:

Ibid. is used only in endnotes and footnotes. In your bibliography (known as a works cited page in MLA format and a references page in APA), each source is listed once, so ibid. isn’t necessary.

When to use ibid.

Use ibid. anytime you cite the same source for a second, consecutive time in a footnote or endnote. Knowing how to cite sources correctly—and common citation mistakes to avoid—can help you avoid unintentionally committing plagiarism.

So what about that method for reintroducing previously cited sources that we mentioned in the last section? It’s simple: If you can’t use ibid. because you’ve cited another source after citing the source you plan to cite again, just note the author’s name, the title of the work, and the page number. Here’s an example:

See how you can use ibid. after reintroducing a source? Remember the purpose of footnotes and endnotes: to eliminate any guesswork on the reader’s part about which sources you used and where you used them in your work. Ibid. is a tool that makes this easier for you, and logically, it works only when the source it’s referencing is clear.

Other ways to make Chicago-style citations

Ibid. isn’t the only Latin phrase used to shorten Chicago-style citations. Another, op. cit., short for opus citatum, similarly refers readers to previous citations. Loco citato, abbreviated as loc. cit., is yet another. Unlike ibid., these can refer to sources other than the immediately previous source. The difference? Op. cit. is used to reference a different page of the same source, and loc. cit. is used to reference the same page. Here they are in action:

But here’s something else to keep in mind about ibid., op. cit., and loc. cit. The current edition of the Chicago Manual of Style, the 17th edition, discourages their use in favor of a system called short notes.

A short notes–style citation is similar to the shortened version we used in the example earlier in this section. It contains this information:

With short notes, you can reference sources you used earlier in your work, even sources cited in previous footnotes or endnotes. Just make sure the first time you cite a source, you cite it in full.

So why is it important for you to learn about these archaic abbreviations? Because you might (in fact, you likely will) read texts that follow older versions of the Chicago Manual of Style, so it’s important to understand what the abbreviations you come across mean. And while ibid. is discouraged in the 17th edition of CMOS, it’s not prohibited. Additionally, ibid. is still part of the Oxford referencing system, which you might encounter during your academic career.

Do I use ibid. in APA, MLA or Chicago-style citations?

Ibid. is specific to the Chicago Manual of Style and Oxford referencing systems. Both use footnotes at the bottom of each page.

Do not use ibid. if you’re using MLA or APA format. Ibid. is specifically used with footnotes and endnotes, and neither of these style guides use footnotes or endnotes. Rather, they make use of in-text citations, and these citations are short—so short that ibid. or an equivalent isn’t necessary.

Ibid. is an abbreviation of ibidem. It’s shorthand that directs a reader back to the previous citation to communicate that the text cited references this same source.

How does ibid. work?

Ibid. tells the reader that you’re citing a source for a second, consecutive time. If you’re citing a different page from the same source, note that page in your citation.

When should you use ibid.?