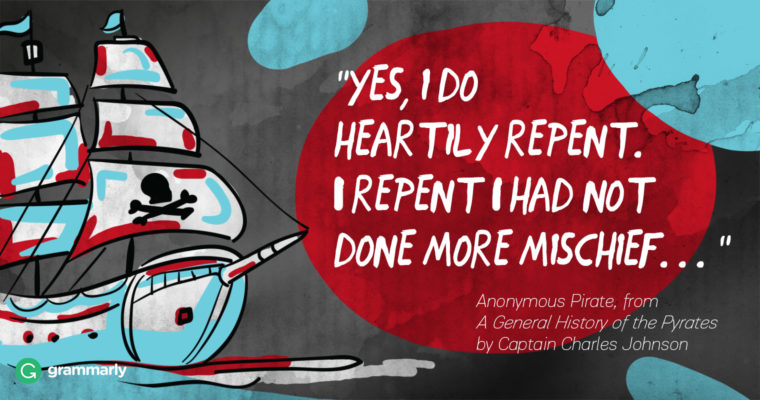 Anyone can talk like a fictional pirate from a book or movie. One “Arr, matey,” and everyone knows who you are attempting to impersonate. But how about real pirates? How did they really talk?

Ahoy is the most versatile pirate word used in movies and books. Sailors use it to call to other ships, greet each other, warn of danger, or say goodbye. The Online Etymology Dictionary says that it probably came from “a hoy” a nautical term related to hauling. When the Scottish poet William Falconer wrote a nautical dictionary in 1769, he didn’t include ahoy, but he did include “hoay” as a call that a master would use as he gave orders to workers in the main-top.

In The Pirates of the Caribbean, one character named Ragetti sees something that makes him exclaim “Blimey.” This interjection expresses surprise, excitement, or annoyance. Which emotion moved Ragetti? Well, he saw the ship headed towards a huge waterfall, so it probably wasn’t excitement. The Online Etymology Dictionary proposes its origins in a longer phrase that you might say right before you plunge down a cascade: “God blind me!”

Matey is a diminutive form of mate. Pirates use it to address their friends and crew.

“Precisely. Arr. So, Mrs. Jack… Er, is that still your name? Or, I tremble to ask, have you adopted a pirate identity?” “Arr, matey, of course I have! It’s…” She pulled an eggplant from the grocery bag. “Captain Eggplantier.” —Shannon Hale, The Actor and the Housewife

The rolling R’s of yarr (and arr) probably derive from a dialect of Southwest England. According to an article on the Dialect Blog, fictional pirates might speak with this accent because the popular actor Robert Newton used this type of accent when he portrayed Long John Silver and Blackbeard in films. Other actors copied, and the stereotyped speech spread. The problem is that many pirates originated from other countries so no one today really knows what people aboard pirate ships sounded like!

In Treasure Island by Robert Louis Stevenson, the pirates burst into song:

So what does yo ho ho mean? Oxford Dictionaries define it as an archaic nautical term that seamen used while performing strenuous tasks such as hauling in heavy ropes.

“Arrr, shiver me timbers,” he said in an exaggerated pirate twang. He winked his uncovered eye and hooked his thumbs in his pants. “This is the nicest your mom’s been to a poor old bloke like me-self in days.” —Jennifer Shirk, The Role of a Lifetime

The first mention of this expression in print was from Jacob Faithful, a novel by Captain Frederick Marryat published in 1834. Did pirates really say it? According to History Extra, “it’s almost impossible to know whether pirates (or any seafarers) actually used the phrase, or if it lived only on the pages of Victorian adventure novels.” The same website explains its meaning. Shiver means to splinter into small fragments. Timbers are wooden supports for sailing ships. Certainly, the timbers might shiver if hit by a powerful wave or a cannonball. Fictional pirates use it to respond to any jarring situation.

So, do you really want to get in character? Why not pick a real pirate to imitate? If you research where and when he lived, you will be able to add some authentic expressions to your repertoire. Or better yet, find out what kind of pirate you sound like with our quiz!

Lifestyle4 Tips for Writing an Excellent Toast
Writing, grammar, and communication tips for your inbox.