10 Funny Out of Office Messages You Will Want to Copy 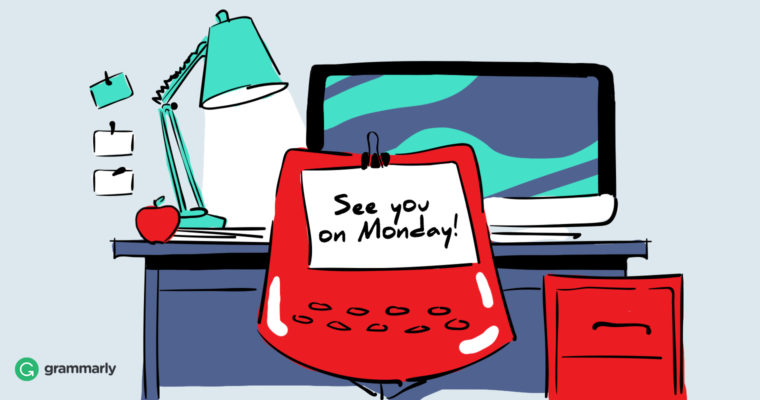 Leaving for vacation? Heading to a work conference? Beset with the flu? You’re taking a break from email correspondence, which means it’s time to set up the dreaded “out of office” message. Not only is it a bore to write, most people will be less than delighted to read it when they were expecting a real response from you.

Here’s a tip: Want to make sure your writing always looks great? Grammarly can save you from misspellings, grammatical and punctuation mistakes, and other writing issues on all your favorite websites.
But what if you could turn this necessary evil into a way of engaging with people that’s informative, memorable, and even fun? Maybe they wouldn’t be as disappointed to get your away message instead of getting you.

For those who are ready to stand out from the crowd, we’ve gathered ten hilarious out of office messages that will inspire you to raise the bar the next time you sit down to write an autoresponder.

I am currently out of the office on vacation.

I know I’m supposed to say that I’ll have limited access to email and won’t be able to respond until I return, but that’s not true. My iPhone will be with me and I can respond if I need to. And I recognize that I’ll probably need to interrupt my vacation from time to time to deal with something urgent.

That said, I promised my wife that I am going to try to disconnect, get away and enjoy our vacation as much as possible. So, I’m going to experiment with something new. I’m going to leave the decision in your hands:

• If your email truly is urgent and you need a response while I’m on vacation, please resend it to interruptyourvacation@firstround.com and I’ll try to respond to it promptly.

• If you think someone else at First Round Capital might be able to help you, feel free to email my assistant, Fiona, and she’ll try to point you in the right direction.

Otherwise, I’ll respond when I return…

Sometimes honesty is the best course of action. Venture capitalist Josh Kopelman shares the facts, then presents the option to choose your own adventure. Do you really want to interrupt his vacation?

2 A Day in the Life of an Autoresponder

Digital marketing guru Ann Handley has become legendary for her humorous out of office responses. Getting an auto-reply is by definition impersonal, but Ann turns a cold response into a friendly conversation through some clever personification, while also promoting the event she’s attending. Genius!

Who is on email: Me, the email auto-responder.

Who is mostly not on email: Ann.

Fun fact: Ann and I never, EVER are on duty at the same time. (Mind blown, right?)

Being an auto-responder is not a bad gig. Upside: I spend the vast majority of my time sitting around, waiting for Ann to take a vacation or for the B2B Forum to roll around.

The latter is precisely what’s going on now! The B2B Forum might be an awesome event for B2B marketers. But for me, it’s like my Chrismakwanzakah — HOORAY! I have something to do today aside from make microwave nachos and binge-watch Netflix!

(What’s the B2B Forum? See here: mpb2b.marketingprofs.com. You can probably still buy a ticket. I cannot. I got work to do!)

You can also peek at what she’s up to in Boston here: http://instagram.com/AnnHandley.

Thanks for swinging by! More importantly, thanks for giving my life purpose and meaning!

Toronto tomorrow for #SMSociety! Out of office email all sorted… pic.twitter.com/SRp2n7x439

Rejection doesn’t have to hurt. Why not soften the blow with an adorable poem that informs and delights?

Thanks for the email, but I’m afraid to say I cannot reply as I am away. A conference in Canada is where you’ll find me, Follow it on Twitter – #SMSociety.

We’re not sure who wrote the original Troy McClure out of office message, but this version by Paul Sokol of Infusionsoft is a real gem.

Hi, I’m Troy McClure! You may remember me from such classic Out of Office Messages as “I’m at Outside Lands Watching Metallica” or “Visiting My Family in Florida.” I’m here today to talk to you about Paul Sokol, and the email you just sent him.

Billy: Mr. McClure? Why is Paul not answering any emails right now?

Troy: The answer is simple Billy: Paul is in San Diego this weekend providing support for an event and nowhere near his work email.

Billy: When is he going to be coming back?

Troy: He will be back on Monday morning.

Billy: Is he going to reply to the email they just sent?

That’s all for now. Watch for me in the upcoming Out of Office Message “At a Wedding,” coming this winter!

5 There’s a Graph for That

Don’t have time to craft the perfect response? A relatable comic or infographic is all you need.

Best out of office email I’ve received in a while… pic.twitter.com/cKau0N59Kd

Take a cue from PR guru Gini Dietrich—make your message memorable by framing it with a pop culture reference.

Is this heaven? No, it’s Iowa.

That’s where I’ll be for the next couple of days, giving my last out of town keynote of the year (yay!). I don’t know if there really is a Field of Dreams, but I’ll be in search of it in between checking emails and getting back to you as quickly as I can.

If you need something while I’m stuck in a corn field, you can send a note to my assistant and she will be happy to help you.

7 A Picture Is Worth a Thousand Words

What is the best “out of the office” email response you’ve gotten? My in below. pic.twitter.com/7N9rVRmDVR

An emoji autoresponder? It’s cute, it’s effective, and they might actually read it!

If they’re not happy with your response they can blame the robots—if they dare.

Reducing email volume is key. Take this opportunity to express your draconian streak.

I am on annual leave until dd/mm/yyyy. I will allow each sender one email and if you send me multiple emails, I will randomly delete your emails until there is only one remaining. Choose wisely. Please note that you have already sent me one email.

Taking a sick day? There’s humor in there somewhere. When your out of office message gets out of hand, you can always blame it on the Nyquil.

It is with sincere regret that I inform you that I feel like a porcupine has climbed down my throat and up into my head. I came to work this morning because I did not want to miss our busy Monday morning and with hopes this would pass. Alas I continue to sound and feel like the [expletive] I nearly stepped in this morning. I shall now retire to my place where bed and T.V. are so that I can nurse a bottle of Nyquil until I succumb to the purple haze of that cherry-flavored syrup. Please excuse my absence and rest assured that I will not be spreading my misery to others in the office.

P.S. Please forgive the absurdity of this email as I feel the sickness and medication have clouded my professional judgment.