Happy New Year, New Year’s, or New Years? How to Wish Someone Well This January 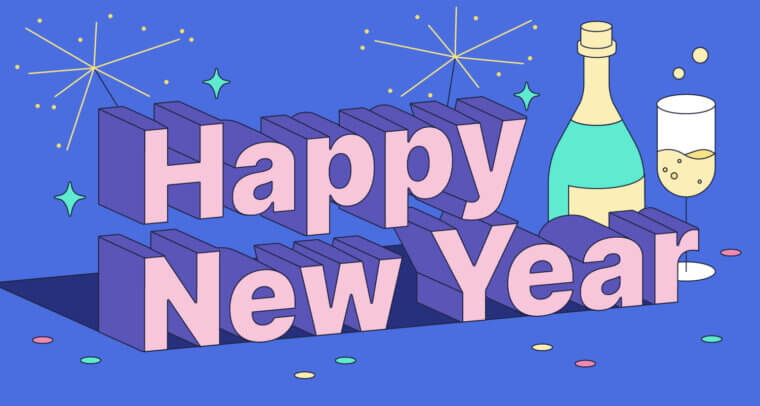 The last thing you want to worry about when ringing in the new year is where to put the apostrophe. Get the nitty-gritty on New Year, New Year’s, and New Years so you can make a toast at midnight and get your punctuation right while you’re at it.

Use the apostrophe-S in “New Year’s” when you’re talking about December 31 or January 1 resolutions you’re making, or other things that “belong” to the New Year.

Let’s get grammatical. Apostrophes are the way the English language shows possession or that something belongs to another thing. Here are the three most common uses of New Year:

In all three cases, there’s a relationship of belonging between the New Year and the noun: the eve, the day, and the resolution are all specifically related to the New Year (it’s not just any resolution), so “New Year’s” becomes the modifier for each noun.

Also, note that “New Year’s” is capitalized because it’s referring to a holiday or a specific event.

Here’s what to say at midnight (and for the first couple weeks of January): Happy New Year!

You also say “New Year” with no possessive apostrophe-S when you’re talking about the year as a whole. “New Year’s” refers to one night, one day, and one resolution (or a lot of resolutions—we don’t judge). But “new year” usually comes up when people are talking generally about the year, often before it’s begun or when it’s still early in the year.

You capitalize “New Year” when you’re talking about the holiday or the big day, but not when you’re referring to the new year as a timeframe.

New Year’s is the end of one year and the beginning of another year. There are two years involved—the old one and the new one—but only one of them is new.

That means you’ll never have the occasion to say “Happy New Years.” “Years” is plural, and in this galaxy at least, only one year happens at a time.

What if you’re talking about new years in the plural? Here’s one example:

In this case, the subject is multiple new years, or every single year, at least when it starts. This sentence could also be rephrased to focus on the New Year’s holiday: “New Year’s always gives opportunities for reflecting, celebrating, and resolving to do things differently in the future.”

Note that this version puts the focus on the event of December 31-January 1, instead of every new year. This emphasis is more common. When people talk about a celebration over multiple years, a tradition every December 31, or a generalization about the new year, the term of choice is generally “New Year’s.” This is because in most cases, “New Year’s” is a shortcut for “New Year’s Eve,” and the name of the holiday functions as an adjective.

Now you’re all set to celebrate New Year’s, start your new year off strong, and resolve to use apostrophes right in all future new years. Oh, and by the way—happy New Year!