A Complete Guide to Reevaluating Your 2017 Goals 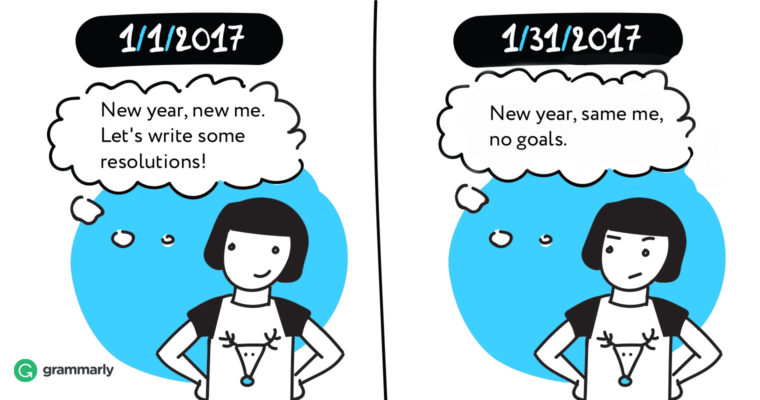 Maybe you decided Stephen King isn’t the only writer who can mash out a few thousand words every day. If Chuck Palahniuk can hammer out an entire novel in under two months, you reasoned, then surely you’d be able to finish your opus by springtime. Journalists churn out many hundreds of words each day and presumably still see the sun once in awhile.

Admittedly, King’s advice to newcomers is to start by aiming for a thousand words a day, six days per week—while many other longtime pros get by doing less: working from an outline, novelist Colson Whitehead shoots for a thoroughly manageable eight pages a week. Zadie Smith has said just getting to 800 words “feels like a champion day.”

Distractions abound, as do other, non-writerly responsibilities. Maybe you need to clear out your inbox before your head’s clear enough to tackle your intro. Or maybe it feels essential to transcribe every word of a research interview you taped before you’re ready to map out a structure. “My apartment in college was never cleaner than during exam week,” veteran reporter Michelle Willard jokes, “and it’s still true: I’ll clean my desk when I want to put off writing a story.”

Whatever resolutions or goals you’ve set for your writing this year, if they’re not working for you, that’s okay. Beating yourself up about it isn’t going to help, so the first step is forgiving yourself. There’s no guilt in being realistic, so long as you’re still writing. With that in mind, here are some tips to help you recalibrate your writing goals for 2017.

Goals are helpful tools for getting writing done. But when they feel depressingly out of reach, they can become crippling and counterproductive. When possible, sometimes it’s wise to ease into your project rather than stress over the eventual scope of the end product.

For instance, a radio journalist covering the news of the day might be obliged to write two versions of the same story: one short, the other longer. By first knocking out a few quick sentences for an announcer to read, the reporter crosses the short version off her to-do list and now has a workable outline from which to build the longer spot.

The same lesson holds true whether you’re drafting a grant application or a novella: your word count will be low before it is high, and sometimes it’s practical to work that to your advantage. Be deliberate about it—make it part of your process—and you’ll surmount one of the greatest obstacles writers face: getting started.

Carve out time to work

Writerly concentration is often fragile. It can crumble with the buzz of a single text message and take several precious minutes to reassemble. If you’re juggling other responsibilities—whether you also have to run meetings this afternoon, or just run laundry—it’s easy to pretend you’ll cram in some writing during brief windows of downtime in between, but that rarely works out.

This is why many writers carve out specific hours to be alone with their work. Some put their phones in airplane mode; a few insist on going offline altogether, instead doing their writing with old-school pen and paper. King has advised against working in a room with a phone, TV, or even so much as an interesting window to look out of; for him, the point of working set hours is “to make sure the muse knows where you’re going to be every day.”

But your routine doesn’t have to be brutal, argues Tim Kreider—a committed writer of the four-to-five-hours-a-day school. Your sessions do, however, have to afford enough empty space for your creativity to breathe:

Idleness is not just a vacation, an indulgence or a vice; it is as indispensable to the brain as vitamin D is to the body, and deprived of it we suffer a mental affliction as disfiguring as rickets. The space and quiet that idleness provides is a necessary condition for standing back from life and seeing it whole, for making unexpected connections and waiting for the wild summer lightning strikes of inspiration — it is, paradoxically, necessary to getting any work done.

If your writing objectives feel difficult to achieve, perhaps part of your revised goal should simply be scheduling a realistic window to work in, and sticking to that.

Parkinson’s law states that “work expands so as to fill the time available for its completion.” But in the end, you’re still aiming to get something finished. That’s where deadlines—even the self-imposed kind—come in handy.

For some writers, it’s the glorious inspiration of last-minute panic that helps shepherd their project across the finish line. For others, the ideal motivation might come from a kind of external pressure—the public declaration, perhaps via social media, that you’ll reach a given milestone by a certain time, for instance. Or the fear of letting someone down. Leveraging that anxiety so it spurs you onward might be all the more reason to let that person know exactly what you’re trying to accomplish, and when.

Phyllis Korkki, a New York Times editor whose book is subtitled “How to Complete Your Creative Project Even If You’re a Lazy, Self-Doubting Procrastinator Like Me,” has remarked that for some folks, making a friendly bet on your ability to hit a deadline, or even hiring a stranger to keep hectoring you through it, might factor into the fix.

Lastly, a deadline can help to enforce your requisite alone-time, lest this ritual feel overly selfish. Consider this entry from the glossary of Jonathan Kern’s Sound Reporting, a seminal guide for anyone writing for the ear:

Crash: To work on a deadline—often an imminent deadline. If you’re crashing, you don’t have time for socializing; phone calls to reporters or editors often begin with the question “Are you crashing?”—and if the answer is yes, the caller apologizes and hangs up.

Key takeaway: the person writing on deadline isn’t sorry; the person bothering them is.

Save editing for later

One other consideration worth keeping in mind as you march toward your new goal: writing is one task; editing is another. It’s often easier and more efficient to cull what’s worth keeping from an overlong draft than it is to try to prune out everything but the most scintillating bits as you go along.

The Nobel Laureate Bob Dylan’s initial draft of his iconic work “Like A Rolling Stone” ran to some 10 pages, for instance, before he was able to whittle it down to four verses. Barbara Kingsolver, the Pulitzer nominee and frequenter of bestseller lists, frames this point perhaps even more starkly:

I write a lot of material that I know I’ll throw away. It’s just part of the process. I have to write hundreds of pages before I get to page one.

Whatever your goal, big or small, go easy on yourself—and get started.