Grammatical Errors from Academy Awards Past 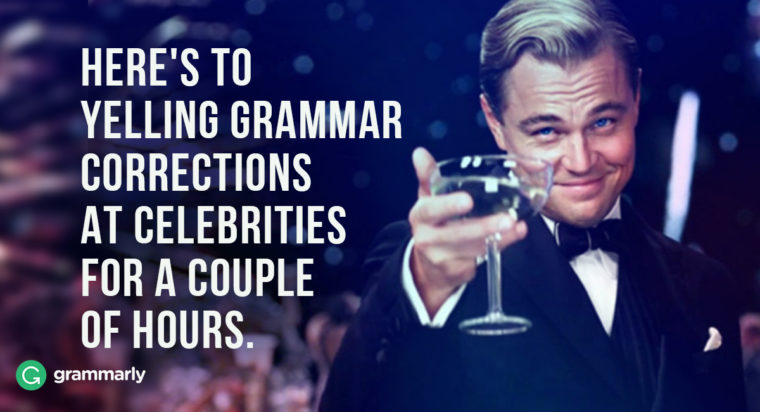 At the 59th Academy Awards ceremony in 1987, Paul Hogan warned celebrities to deliver their speeches with care: “There’s about one thousand million people watching you. So you remember: One wrong word, one foolish gesture—your whole career could go down in flames.” Fortunately for the stars who have made grammar and pronunciation flubs, he wasn’t entirely correct. Only about 37 million viewers, not “one thousand million,” tuned in to watch the Academy Awards last year. And when a favorite celeb makes an error, their fans often find it endearing. They are mere mortals after all! Everyone makes mistakes; let’s look at some of the cutest goofs your famous friends have ever made.

The Wrong Word Award goes to Cate Blanchett! If you take her words at face value, you might think that she loathed accepting an award from the hands of fellow actor Daniel Day-Lewis. “Thank you, Mr. Day-Lewis, from you it exacerbates this honor . . .” Exacerbate means “to make worse.” What word did she mean to say? Perhaps Zac Efron knows; the teen heartthrob said that the lead vocalist of the rock band Yeah Yeah Yeahs was an “aspiration.” Assuming that he didn’t mean that Karen O. was a strongly desired goal, or worse yet, the act of removing fluid from a body cavity, he probably intended to say that she was an inspiration.

John Travolta blamed Goldie Hawn for flummoxing him before he walked onstage at the 2014 Oscars ceremony. In an interview after his mistake, he claims that he was starstruck by the “sexy, charismatic, beautiful” blond icon. After hugging her backstage, he was out of sorts as he prepared to introduce singer Idina Menzel. To make matters worse, the teleprompter featured a “phonetic” spelling of her name that he had never before seen. Somehow, “Adele Dazeem” came out of his mouth, a name that doesn’t belong to the singer or any other known person. It seems that John also inspired other celebrities at other ceremonies. Gwen Stefani carried on his tradition at the Emmys as she presented nominees. She opted for the rather French-sounding “The Colbore Report” instead of “The Colbert Report” for Outstanding Variety Series.

Even the President of the Academy of Motion Picture Arts and Sciences is not immune. At the 87th annual Academy Awards, Cheryl Boone Isaacs had a little trouble with the name of a nominee for Best Achievement in Cinematography. After being called Dick Poop, Dick Pope told USA Today that he had been called worse in his lifetime.

Paul Hogan won’t be presenting at the next ceremony, so here is some advice for celebrities (or anyone else) who will appear on stage. First, keep your speech short! Alfred Hitchcock accepted his Oscar with five words: “Thank you very much indeed.” If possible, consult with whoever you are introducing on how to pronounce their name and practice it several times in advance. Last but not least, don’t use words you don’t know well or you will exacerbate the situation!