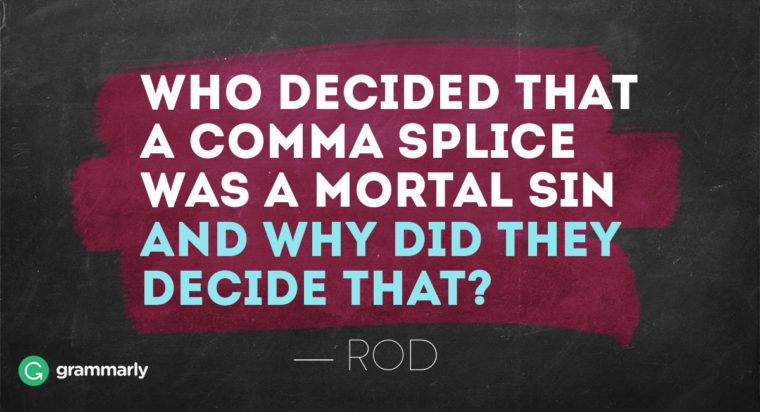 Welcome to Grammarly’s second Q&A! We’re back this month to answer more of your questions about grammar, spelling, punctuation, and writing. Read on to find the answers to this month’s questions, and don’t forget to check out the questions and answers from February’s Q&A!

My wife is a college professor and takes points off for anyone using “nowadays.” I’ve seen you use it on this blog. What should I tell her? —Jim

“Nowadays” is a perfectly valid word. It’s been around since the fourteenth century and has never hurt anybody. It’s certainly preferable to wordy alternatives like “In this day and age.” Of course, what you tell your wife about it is up to you!

Here in Montana many of my students use the phrase “on accident” instead of “by accident.” Is this just a regional usage or is it grammatically incorrect? It makes me cringe when I hear it and I politely correct the kids. Am I wrong doing so? —Carole

This usage actually breaks down along generational boundaries, not regional ones. “On accident” seems to have appeared in the late 1970s or 1980s and is now even more common than “by accident” in certain age groups. It’s hard to say exactly why. Sometimes prepositional idioms just change; plenty of them aren’t governed by any logic or pattern in the first place. For the moment, “by” is still the safer choice, but don’t count on it staying that way forever.

I seem to use commas when they sound right. Is there a general rule in their use? —Teena

Commas serve many different purposes, so no, there’s no blanket rule that covers every nuance of usage. The problem with inserting commas by ear is that it’s often inconsistent and prone to mistakes. If you already have a pretty good sense of where commas ought to go, you’ll do yourself a favor by learning the reasons behind why they “sound right.” This is a good place to start.

What’s the plural of MOUSE when we’re talking about computers? Somebody told me it’s MOUSES not MICE. —Paola

Both “mice” and “mouses” are acceptable when you’re talking about computers. “Mice” seems to be more common though.

I want to become a better writer, but I find myself stricken with writer’s block. I am also unable to escape the memories of red-stained essays of my childhood. How do you know that you are starting a sentence grammatically correctly? I overthink the first word. Am I able to start a sentence with “but,” “because,” or any other introductory words besides a transition word, a question word (who, what…), and a noun/pronoun? —Susan

First, forget any rule you learned that says you’re not allowed to start a sentence with certain words. You can start a sentence with any word—whether it’s grammatical or not depends on the rest of the sentence. Many of us were taught in school that it’s wrong to start a sentence with a conjunction (such as “but,” “because,” or “and”). But that’s simply not true. It’s a grammar myth, just like the “rule” that you can’t end a sentence with a preposition or split an infinitive. Second, give yourself a pat on the back for putting in the time and effort to improve your writing. Never let anyone make you feel bad for trying! Third, consider downloading Grammarly’s browser extension if you haven’t already. It may help ease your anxiety about grammatical mistakes enough to lift your writer’s block.

I am very confused about putting punctuation at the end of a sentence inside or outside quotation marks. Please help! —Gail

Many of my students use “have” as a full verb to express ownership (“I have a new bike”). I am never sure whether I need to correct this. “Have got” sounds better in style to me, whereas “have” or “got” alone seem colloquial. So, in formal essay writing, should I insist on “have got”? —Andreas

“Have” is the standard form in American English. “Have got” is standard in British English. Neither form is wrong and both are understandable to Americans and Brits.

I’ve noticed news articles using box brackets [ ] around a word in sentences. The strange thing is that if the word in the brackets was taken out, the sentence would make no sense; so why bracket it? An example is “Sandra is very disappointed that there aren’t more [women] in the field of astrophysics.” Thanks in advance! —Rick

Sometimes bracketed text replaces part of the original quote. In your example, [women] might replace “of them” or something similar.

I can’t find a consensus on what punctuation is acceptable with “namely,” either in style guides on online. Is it always necessary to use a colon or em dash before “namely,” or can you use a comma? For example, would this be okay? “She loved three things, namely, cats, chocolate, and fuzzy socks.” —Brittany

Is “cousin sister/cousin brother” the correct usage? Should we not be using only “cousin,” or say “cousin John?” —Shuchita

It depends on your dialect of English. “Cousin sister” and “cousin brother” are not widely used terms in American English, but they’re common in Indian English.

I keep hearing “transition” as a verb. The verb is “transit,” right? —Les

When using apostrophes for possession with names ending in “s” is it James’s or James’? Internet is inconclusive. My understanding is the extra s is needed if you hear it when you say the word. Help please! —Nick

Both ways are acceptable. They’re simply different styles. James’ is common in newspapers, while James’s is common in trade books. You can choose whichever method you like better—just be sure to use it consistently.

I have heard the expression “on tomorrow,” as in the sentence, “We are expecting rain on tomorrow.” Please help me explain why this is incorrect. I believe that the word tomorrow should suffice without the addition of the preposition “on.” —Cheryl

“Tomorrow” can be a noun, as in “Tomorrow is my birthday.” But it can also be an adverb, as in “It will rain tomorrow.” As an adverb, “tomorrow” means “on or during the day after today,” so adding the preposition “on” is redundant.

I would like to know if the commonly used “someone else’s” is correct, as in “I have my coat. That must be someone else’s.” It seems to me that the word “someone” should take on the possessive form. “Else” appears to be an adjective when used in this manner. I think perhaps the usage is grammatically incorrect altogether. “That must belong to someone else” sounds much better. Thank you! —Wendy

Interestingly, before the 1840s “someone’s else” was actually the standard form, but to modern speakers that form will likely sound very unnatural. Over the past century and a half, “someone else” has evolved into a compound pronoun, so yes, it’s correct to say “someone else’s.” You can say “belongs to someone else” if you prefer it, but occasionally it’ll produce an unnecessarily wordy sentence.

I have been trying to figure it out for a long time, but I still can’t find a proper reason to why do we still write the letter in the word which we don’t pronounce. Like ‘H’ in honor is silent, but we still write it in the word. —Kaustubh

This aspect of English is both fascinating and maddening. Long ago, English speakers actually did pronounce the H in “honor.” Over decades and centuries, the pronunciation of this word (and most other words) shifted, but we never updated the spelling of the word to match modern pronunciation—despite several campaigns to do so. The result is that the spelling of many English words no longer matches the way we pronounce them today.

Who decided that a comma splice was a mortal sin and why did they decide that? —Rod

According to Merriam-Webster’s Dictionary of English Usage, it was H. N. MacCracken and Helen E. Sandison, in their 1917 book Manual of Good English. They didn’t give any reason for declaring it incorrect, so we can only speculate about that. In the eighteenth century, comma splices (commas that join two independent clauses) were acceptable—even in modern writing you can sometimes get away with them in dialogue or conversational writing. But most readers (and English teachers) now consider comma splices to be errors in ordinary prose.

What is the name of the little decorations on the letters and numbers in a certain font? For instance, the little flip at the top of the number one and the little line at the bottom? —Catherine

Thank you to everyone who submitted questions! Do you have a grammar conundrum? Submit it here for a chance to have it answered in our next Q&A. See you back here next month!

LifestyleAre You a Grammar Troll? Quiz