Why It’s Important to ‘Get It in Writing’ 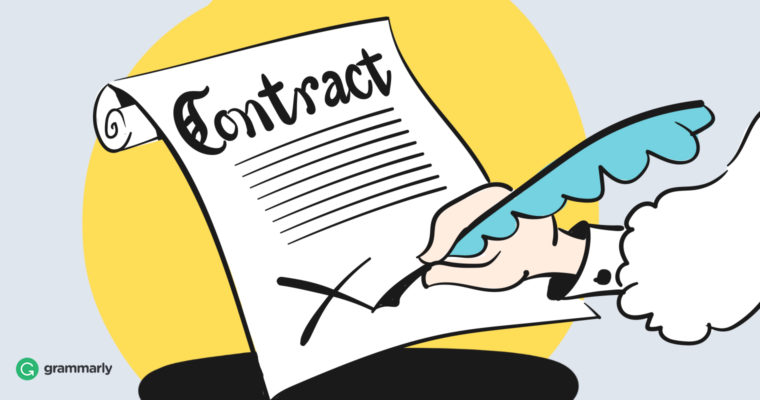 “Get it in writing!” That’s a phrase we hear often. In things like bills of sale, freelance contracts, or employee compensation packages—if you and other parties are making an agreement, there’s value in using written language to document it.

We often relate the phrase “Get it in writing” to fancy legal contracts drafted by lawyers, whose time is expensive. But getting something in writing doesn’t have to entail a contract. It can be as simple as a quick email solidifying a verbal agreement.

An Example of What It Means to ‘Get It in Writing’

I’ve volunteered on the board of directors for several small nonprofits over the years. Groups like these are notorious for . . . well, all the things that happen when you put a bunch volunteers with different talents, abilities, and personalities together. Because their efforts are secondary to their busy lives, it’s common for volunteers to get their wires crossed and for things to slip through the cracks.

On one club’s board of directors, where part of my responsibilities included crafting a newsletter, I learned the value of getting conversations in writing. Although the club’s president told me verbally that a member’s article contributions were filler for when space allowed, my leaving one out and rescheduling it for the next newsletter ended up causing hurt feelings. And all that could have been avoided had I taken a moment to get the conversation in writing. Here’s what I wish I’d written:

Thanks for chatting with me about the newsletter at last night’s meeting. I’m excited for next month’s issue!

Things were hectic last night, so I’d like to make sure I have our conversation straight. As I understand it, Ralph’s articles are to appear in the newsletter as space permits, and it’s okay to push one back to the next issue if we have a full four-page newsletter already.

Would you take a moment to reply and confirm whether that’s correct? And, of course, if there’s anything you need to clarify, this would be a great opportunity to do that.

Thanks again for being our fearless leader!

My email would’ve served a couple of purposes. First, it would have given me the opportunity to reiterate my understanding of the conversation. Bob had said, “Consider Ralph’s articles filler for when we have space.” The second paragraph of my letter clarifies exactly how I interpret what he said.

Second, getting our conversation in writing would have given Bob a chance to follow up with me if it turned out I’d misinterpreted what he’d told me. It would have also given him the chance to present me with an addendum, perhaps something like, “It’s okay to leave Ralph’s article out, but it’s best to email him to tell him why that’s happening so he doesn’t feel slighted.”

When leaving Ralph’s article out of the newsletter resulted in hurt feelings, a record of the conversation would have allowed me to cover myself—I could have referred to the email exchange I’d had with with Bob. Bob wouldn’t have been able to backpedal and claim no knowledge of the conversation. (Which, incidentally, is exactly what he did.) More to the point, he would have been less likely to, knowing that our conversation was recorded in text.

Although we often think of getting it in writing when it comes to legal matters like sales agreements and employment contracts, getting day-to-day conversations (that might result in a misunderstanding) in writing can be incredibly useful. It’s a powerful tool for avoiding confusion and disagreements.

What Types of Things Do Require Legal Contracts?

Although both written agreements and verbal “handshake” agreements are considered legally binding, the “he said/she said” nature of verbal agreements makes them difficult to enforce in a court of law. And some high-stakes contracts should be drafted by a lawyer, or at least templated by one.

Some transactions that should have legal contracts include:

Of course, this article isn’t intended as legal advice. When in doubt, get legal counsel. If you’re wondering whether an agreement should have a lawyer-prepared contract, consider whether conflict over the terms could have significant legal or financial ramifications. If it would, then involving an attorney or using a legal template is a good idea.

Contract templates are often available online, but finding a reputable source can be tricky. Be sure to do your homework before handing over credit card info to sites that require payment for creating and printing contracts.

Here’s a tip: Try searching for the type of contract you need plus your state. For instance, if you’re selling your car and you live in California, enter “auto sale contract California.” State government and law sites often have free contracts available for download. My search turned up a contract from the California DMV. You’ll know you’re dealing with an official site if it’s located at a .gov Internet address.

The Benefits of Getting It in Writing

Whether or not it’s required, a written agreement is proof of the terms you discussed. It prevents people from forgetting what was agreed to, denying what they’ve said, or changing their story (like Bob did.) Written documents can also serve as legal evidence in court, if necessary.

According to the Shake Law blog:

Get everything in writing! Everything. Even if it’s just on a napkin, get it in writing. Samuel Goldwyn said ‘Verbal contracts aren’t worth the paper they’re written on.’ And it’s true — verbal contracts may be legally binding in theory, but try enforcing one!

So, put those writing skills to use! Take time to think through and record the agreements you make. Clearly laying out the verbal covenants in text can save a lot of hassles down the line.