A Guide to Personal Pronouns and How They’ve Evolved 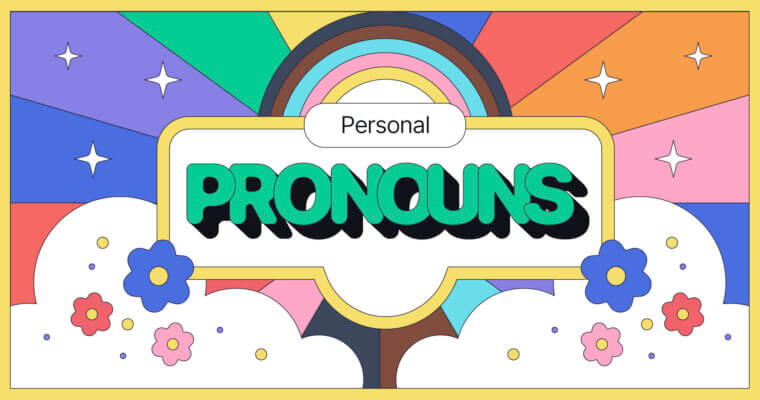 Pronouns are an important part of English. Understanding how to use personal pronouns is essential for being able to talk about people accurately and respectfully. If you’re curious about pronoun use or want to learn more about them, you’re in the right place! Read on for an explanation of the purpose of pronouns, a list of terms and definitions related to pronoun use, and a chart of many types of pronouns and their forms.

Communicate inclusively
Grammarly helps you write the way you intend

Pronouns are a part of speech in English, and, like all parts of speech, they serve a purpose. Verbs, for example, tell you what someone is doing. Pronouns are words that you can substitute for another noun (or a name) when the context has already made it clear whom or what you’re talking about.

In English, when you’re talking about an individual person, you’ll most often be using a third-person pronoun. The most common third-person pronouns for individuals are she and he. Some people use the pronoun they instead of she or he, and some use other pronouns like ze or ey. Some use different sets of pronouns in different contexts. And there are some who use no pronouns at all, and instead use their name in all cases.

Pronouns have evolved to represent people’s identities beyond the gender binary of masculine (he/him) and feminine (she/her). The most well-known of these more inclusive, nonbinary pronouns is the singular they/them; there are many others in use.

Why are pronouns important?

Gender identity is complex, which means that pronoun usage can also be complex. But there is one fairly simple rule when it comes to pronoun usage: The right pronoun to use for another person is whichever pronoun (or pronouns) that person wants you to use.

When you’re deciding how to use someone else’s pronouns in a sentence, especially if they’re pronouns you’re not too familiar with, remember this: Treating someone with respect is never a grammatical mistake. Regardless of what you might have learned about subject-verb agreement, the singular they, or other areas of grammar, the most important consideration should be using the pronoun you have been asked to use.

History of pronoun use

To some, the idea of using pronouns besides she and he to talk about individuals is new, but in fact, it has a long and well-documented history. English speakers have always needed a way to refer to people in cases where the subject’s gender was unknown, irrelevant, or not reflected by he or she.

Since it can be used for objects or animals but not people, English speakers started using they as a gender-neutral way of referring to an individual person centuries ago. According to the Oxford English Dictionary, the first record of the so-called “singular they” dates to 1375, where it appeared in a work called William and the Werewolf. (If you’ve ever heard arguments that the singular they is an error, you should know that nobody thought it was a problem until a handful of eighteenth-century grammarians decided to make a fuss about it. The pronoun you was once only a plural pronoun, but nobody worries about that one.)

People have also been coining new English pronouns for decades, including ze, xie, yo, and many others.

Which pronouns should you use?

Sometimes when you meet a new person, they’ll simply tell you which pronouns you should use for them. For example, you might hear, “Hi, I’m Wren and my pronouns are they/them.” In that case, you should use the pronouns they, them, their, etc. when talking about Wren. For example: “Wren is at their desk.”

In cases where you’re going to have an ongoing interaction with someone, you can ask which pronouns to use. You might say, “What are your pronouns?” or “What pronouns should I use to refer to you?” It’s also a good idea to provide your own pronouns when you introduce yourself. Avoid asking someone about their “preferred” pronouns—it implies that their gender is a choice rather than simply a part of who they are.

If you make a mistake and use the wrong pronoun for someone, don’t dwell on it or make excuses—just apologize, restate what you said using the correct pronoun, and carry on.

Using pronouns while writing with Grammarly

Grammarly’s product can recognize the use of the singular they, as well as several other pronouns (sometimes called neopronouns; more on those below). In some cases, it can even offer suggestions when the wrong form of a pronoun is used in your writing. For example, it will flag zirs in the sentence Kaley changed zirs name on the daily paper and suggest changing it to the correct possessive form, zir.

Personal pronoun: A word that can be substituted for other nouns, particularly people’s names

Gender-neutral pronoun: A pronoun that does not specify the gender of the person it refers to

Neopronoun: A category of pronouns created to use in the third-person singular, such as ey or ze

Wondering about all the different forms of third-person singular pronouns? Here’s a chart showing a few of the most common ones.

While pronouns can be used to express gender identity, the English language is evolving into more nuanced ways of referring to individuals beyond gender. Elaborating on the definition provided above, neopronouns are singular third-person pronouns that “refer to people entirely without reference to gender,” shares Kelsey Pacha. As research indicates that pronouns outside the gender binary are increasing in usage, particularly among LGBTQIA+ youth, neopronouns are becoming more adopted.

While neopronouns include gender-neutral and nonbinary pronoun categories mentioned above, like they/them/theirs and xe/xym/xyrs, they can also extend to “words that reflect other aspects of a person’s identity, like their interests,” says Pacha. He explains that “neopronouns may reflect a person’s personality, fandoms, favorite emojis (did Prince start this trend?), and even identities that go beyond human.” For example, noun-self pronouns are one type of neopronoun that take a noun, like a person’s name (Jae/Jaes/Jaeself), a type of animal (owl/owls/owlself), or an object of interest (tree/trees/treeself) and generates a set of pronoun forms.

Neopronouns are “often created and shared in online communities, where originators of such terms are given credit.” To learn more, “The Nonbinary Wiki and mypronouns.org are great resources on pronoun origins, definitions, and other resources,” according to Pacha.