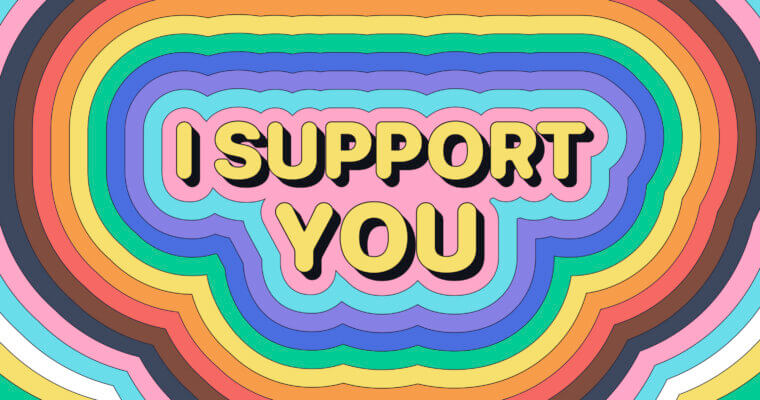 These three little words can make a big difference, and they’re the backbone of what it means to be an ally. In fact, allyship is more than just supporting others—it entails standing up for others’ rights when they’re at a disadvantage.

In fact, when it comes to being an ally of the LGBTQIA+ community, language is a powerful tool. When used well, your words can make a positive impact, helping to educate others while fostering inclusion. (Just be aware that if someone questions you about the empathetic and inclusive language you’re using, you should be prepared to explain why it’s important.)

Here are six ways to express your LGBTQIA+ allyship through empathetic language:

As a baseline, you should know what the acronym LGBTQIA+ stands for:

The plus sign (+) acknowledges that these individual labels don’t cover everyone.

While these labels are meant to help people express their identities and find belonging, they are also complex and evolve often. So it’s important to stay up-to-date about what they mean and how to use them. (And these aren’t the only terms you should know. For more, check out this guide to LGBTQIA+ terminology.)

Inclusive language is key, and a great way to start is simply making gender-neutral language your default. Not only can it be smoother as it’s more inclusive of everyone, it also acknowledges the existence of those who don’t fall into the gender binary. Here are a few easy ways to incorporate this language into your daily life:

A note about “folx”: While this alternative to “folks” is recognized by Merriam-Webster and some people use it regularly, it isn’t universally accepted. That’s because the original word is already gender-neutral. So some may see it as more of an empty gesture than true allyship. Again, whether or not it’s appropriate for you to use will depend on the preferences of those around you. When in doubt, ask.

Another way to build gender-neutral language into your daily life concerns referring to someone’s significant other. Rather than using the words “husband” or “wife,” you could use the terms “partner” or “spouse.” It’s a simple swap that can help those around you feel more comfortable and welcomed.

Ask for people’s pronouns—and use them

The use of various personal pronouns, including the singular they and other alternatives to “he” and “she,” has become more common over time. Placing pronouns on your social media profile pages can be a form of passive allyship. But asking for a person’s pronouns, and using them, is more powerful as it allows people to be respected without having to ask for recognition.

What to say: Hi, I’m Eve. My pronouns are she/her.

Why it works: By announcing your own pronouns, you let those around you know they’re welcomed to say their pronouns. This works well if you aren’t yet comfortable asking for pronouns outright.

What to say: What pronouns do you use?

Why it works: Checking in can be useful rather than making assumptions.

“Coming out,” or being open about one’s orientation or gender identity, is complex. For example, one person might be out only to close friends, while another person may be fully out in their current circumstances. It’s all a matter of degrees, and it’s a process. Regardless, the preferences and privacy of the person should always be respected.

Asking if there are specific people or situations in which they aren’t comfortable sharing their gender identity or sexual orientation is a good way to support LGBTQIA+ individuals.

Language is a powerful tool, but it can also be used harmfully. The word “queer” has been used as a slur. Some people within the LGBTQIA+ community have reclaimed it and now use it as an umbrella term and a way to empower themselves. However, that doesn’t mean that everyone is OK with the use of the word. And not everyone wants that label to be applied to them. So it’s best to avoid using such terms, especially as an ally.

Othering is the opposite of inclusive language: It puts people in a separate category, thereby emphasizing the idea that they don’t belong. Here are a few ways othering can show up in everyday conversation, and what you can consider saying instead:

Othering: refers to LGBTQIA+ identity as a “lifestyle choice” or “preference”

Alternative: use the appropriate sexual orientation or gender expression, when relevant

Othering: focuses on orientation when discussing marriage or love

Alternative: use “marriage” and “love” as the universal terms they are

Othering: calls attention to the orientation or identity of the parents when discussing adoption or parenthood

Alternative: talk about adoption and parenthood without focusing on orientation or identity