How Game of Thrones Characters Would Approach a Writing Assignment 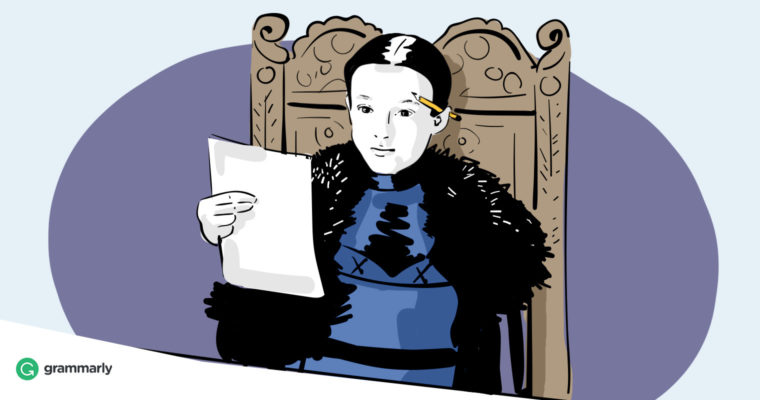 Though A Song of Ice and Fire was not written to be a writing guide, there are many valuable lessons in the epic that can be broadly applied to different facets of life.

In this post, we will be analyzing characters and their development throughout book five of George R.R. Martin’s A Song of Ice and Fire and season seven of HBO’s Game of Thrones to understand what lessons certain characters can offer to improve your writing.

Don’t shy away from your unique (writing) style.

Tyrion is the youngest of the three Lannister siblings and an outcast. Yet, he has wisely chosen to own his small stature and “monstrous” appearance, which gives him a unique perspective of the world. He even advises such to Jon Snow:

Never forget what you are. The rest of the world will not. Wear it like armor, and it can never be used to hurt you.

Tyrion shines with self-confidence. From his witty one-liners to passing off his own wisdom as “ancient and timeless,” he embodies the truth that his voice matters. Striving for the same authenticity to yourself, your writing will shine.

Use the resources around you, freely share your insights, and try some poetry.

Samwell Tarly is a noble whose strengths as a bookish scholar didn’t live up to the expectations of his house, which forced him into the brotherhood of the Night’s Watch. As an assistant to Maester Aemon of the Night’s Watch, Samwell’s true strengths—his loyalty, resourcefulness, and insight—come to the fore. These traits continually serve him and those around him as he travels to the Citadel at Oldtown, where he uncovers a source of Dragonglass (which kills Whitewalkers), cures Jorah Mormont of Grayscale, and offers some editorial advice to Archmaester Ebrose about the title of his book—“Possibly something a bit more … poetic.”

George R.R. Martin himself has even identified with Samwell Tarly, which has led some to speculate that Samwell Tarly is actually the narrator/writer of A Song of Ice and Fire. Learn from him and you’ll be in fine (writing) company.

Rely on your support network to create better (writing) solutions.

The reunion we are all waiting for ? #GameOfThrones pic.twitter.com/gLu70dEB8K

Jon Snow begins his journey as an underappreciated bastard of House Stark and hesitatingly rises to lead the Night’s Watch. Eventually, he is elected Lord of Winterfell. Jon Snow, guided by a sense of duty and loyalty to his team rather than by ambition, seeks counsel and consensus almost to a fault. This tendency to rely on his support network and the wisdom of his council helps him to lead well, however. This is exemplified in both his election as Lord Commander of the Night’s Watch and Lord of Winterfell, when supporters speak on his behalf.

Improve your writing the same way by regularly seeking feedback from respected peers.

Trust your intuition and be bold!

Daenerys Targaryen, Khaleesi, Breaker of Chains, Mother of Dragons. . . whatever you call her, you cannot deny her accomplishments. As an orphan exiled from her homeland, she has overcome many hardships to assert her claim to the Iron Throne of Westeros, including ending the slave trade and bringing dragons back from extinction.

One of her guiding characteristics throughout all this achievement is the faith she has in herself and her intuition. Quite often she trusts her intuition of what is right in spite of contrary advice, and her instinct doesn’t fail her.

Are you looking to improve your writing? Trust your instincts.

Be direct. Use short sentences.

This young Lady of Bear Island was orphaned at age ten after the Red Wedding and became one of the youngest leaders in Westeros. Though her participation has only picked up recently in the series, her style is iconic—demonstrated as early as Season 5, when she is asked to bend the knee to Stannis Baratheon:

“Bear Island knows no king but the King in the North, whose name is Stark.”

Lyanna is a master of brevity. Her bold, confident directness silences those around her and lends her a tenacity all her own.

Bolster your own writing by using the same technique: keep it simple.

Don’t be afraid to learn something new.

Davos Seaworth, or the Onion Knight, is a reformed smuggler whose loyalties lie with whomever he sees as the greatest hope for the people. In his journey to support those leaders, he hasn’t shied away from the learning he has had to pursue. He unashamedly takes reading lessons from a child. He willingly admits his wrongs and his lack of familiarity with traditions. He embraces the need to continually learn rather than seeing it as a failing or weakness.

Becoming a great writer is a learning process. Humble yourself to that and see where it will take you.

Margaery Tyrell, wife of Joffrey and later Tommen Baratheon, was raised to master court politics at Highgarden. While in King’s Landing, she excels, garnering the love of the people as well as her husbands. The personalization she shows to the people she is with wins her power quickly. She caters to her audience so well that Queen Regent Cersei Lannister begins to doubt her own influence over her son, King Tommen, and orchestrates Margaery’s demise.

Learn about your audience and give what you can to them in your writing.

Don’t overestimate your own opinion.

"She had no time for sleep, with the weight of the world upon her shoulders" – Melisandre, A Dance With Dragons#PrepareForWinter #ImSoTired pic.twitter.com/GXTa9Zk9Th

Where self-confidence and instinct can improve the authenticity and effectiveness of your writing, Melisandre, a Red Priestess of the Lord of Light, shows how over-confidence can lead you astray. Born an orphan and trained as a priestess, Melisandre is so convinced of her powers of prophecy that she leads Stannis Baratheon to wage a war he catastrophically loses after sacrificing his own daughter in a vain effort to gain favor with the Red God.

This experience teaches Melisandre that her interpretations of the prophecy are not, in fact, perfect and that much can be lost from valuing your skills and opinion too highly.

The writing tip here? Learn to balance your instinct and self-confidence with gut-checks now and then to be sure you’re on the right track.