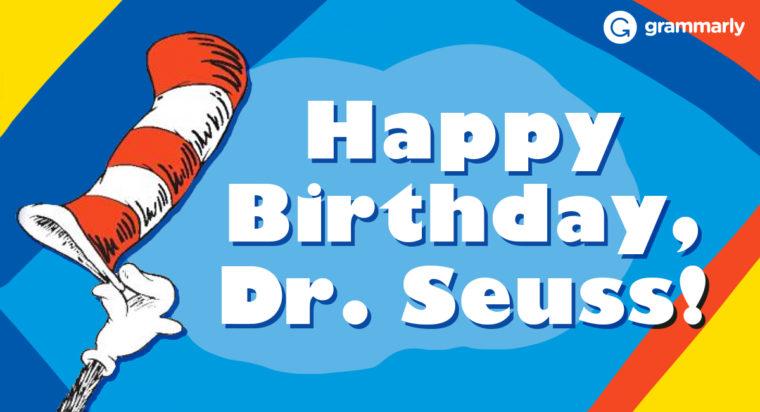 Influencing children through excitement and wit

Dr. Seuss makes us laugh and use our brains.

Why exactly would a cat wear a hat? Why does this same cat walk upright? Furthermore, cats can’t talk! Examined in that light, The Cat in the Hat seems rather nonsensical. And that, perhaps, is the secret of Dr. Seuss’s success. BBC News reports, “He has been credited with killing off Dick and Jane, the sterile heroes of older children’s books, replacing them with clever rhymes, plot twists, and rebellious heroes who do the unexpected. The Cat in the Hat was commissioned following publication in 1955 of an influential book, Why Johnny Can’t Read, which said children were being held back by boring books.” We can see his influence in the colorful characters of children’s stories and films today.

Don’t limit your imagination or your vocabulary

To curmudgeons, grinches, and general displeasures,

Green eggs, loraxes, and nerds are certainly not treasures.

If you look up “grinch” in a dictionary today, you will find a definition: “a person or thing that spoils or dampens the pleasure of others.” However, Dr. Seuss didn’t find the word in a dictionary. He created it for his book How The Grinch Stole Christmas. He has also been credited with publishing the word “nerd” for the first time in his 1950s book If I Ran The Zoo. You might not use his other vocabulary—diffendoofer, oobleck, midwinter jicker—but don’t your kids giggle when they see the silly words in his books?

Lots of words aren’t necessary; the lesson can be simple.

Don’t judge a Sneetch by a star or a color or a dimple.

Dr. Seuss showed it was possible to teach complex moral lessons with his simple verses. In “The Sneetches,” certain star-bellied creatures become high-minded about their unique birthmarks. Surely, the stars on their bellies made them superior to those sneetches whose bellies were bare. An opportunist with a Star-On and a Star-Off machine makes it evident that everyone is the same underneath the star. When children learn what happened to those who wore yellow stars during the Holocaust, they might be reminded of this powerful story.

But you can write stories, fifty words at a time.

In the age of Harry Potter and other multi-part sagas, Dr. Seuss’s gift for succinctness holds a certain appeal. He was challenged by William Ellsworth Spaulding of Houghton Mifflin to write “a book children can’t put down” using only words from a first-grade vocabulary list. With 348 words at his disposal, Dr. Seuss needed only 236 words to create The Cat in the Hat. Green Eggs and Ham was also the result of a challenge. He won $50 in a wager when he used only fifty words. When Renaissance Learning surveyed British schoolchildren, they found that his books are more widely read than Harry Potter!

It has to be said—that Seuss, he’s a gem.

What lessons learned, and what words from him!