Find Your Zen When Coworkers Are Getting on Your Nerves 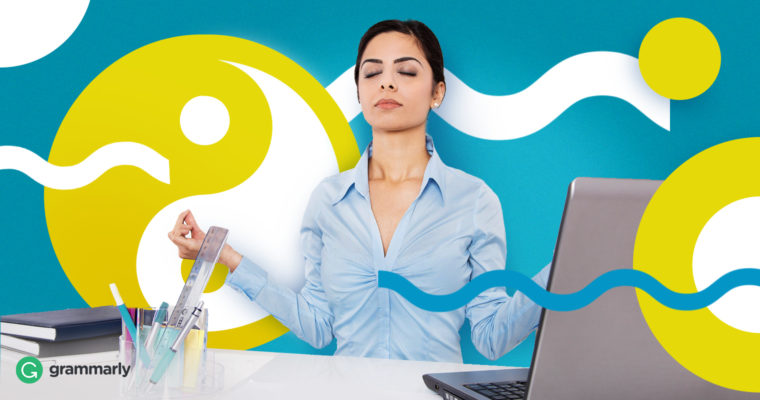 Today is not going as planned.

A wave of unexpected assignments crashed across your desk this morning, forcing you to skip lunch. You’re feeling grouchy. Then, seeking solace in the breakroom, you discover an overloaded refrigerator shelf has chosen this very moment to collapse. After a terrible crash that surely captured everyone’s attention, you find yourself standing in a pool of broken glass, sorrow, and cold tea. Worse still, Chad, the smug programmer who always talks about his tattoos, is right there, looking on, with the nerve to act like this is all hilarious.

Somewhere in the back of your mind, your inner professional is pleading with you not to verbalize these thoughts. There is no edit-undo shortcut for the regrettable things you’re tempted to say. In moments like this, being able to regain your chill is essential.

And opportunities to practice abound: from coworkers with a knack for rudely interrupting while you’re trying to concentrate to that one intern with the insanely loud headphones, your office is full of chances to work on finding your zen. Let’s talk about how.

You would like to be on an island several time zones away from awful Chad and the stupid pile of work that’s waiting back at your desk. At minimum you would like to teleport to the coffee shop across the street and acquire a scone.

That impulse to flee is understandable, but for now, you’ll do well to create some mental distance, according to experts at Ohio State University. Instead of counting to ten, try zooming back and taking a more remote view of the situation, says researcher Dominik Mischkowski:

The secret is to not get immersed in your own anger and, instead, have a more detached view. . . . You have to see yourself in this stressful situation as a fly on the wall would see it.

This technique, known as “self-distancing,” helps keep you from focusing too much on your irritation and saying something you’ll later regret.

People often mistake anger for something that builds up and has to be released, much like steam in a pressure cooker, writes psychology professor Brad Bushman. But it’s better to dial back the heat altogether.

To use another analogy, venting anger is like using gasoline to put out a fire: It just feeds the flame. Venting keeps arousal levels high and keeps aggressive thoughts and angry feelings alive.

Before you react angrily, it’s a good idea to change the channel and give your elevated heart rate some time to come back down. In the meantime, you might mentally reframe the issue: maybe Chad is comically inept at knowing when to add levity. You might also distract yourself with a little self-care: take ten minutes to go grab that scone and watch a cat video.

Take care of yourself

Sometimes, when you’re feeling vexed with your coworkers, there’s no singular reason—just an amalgam of minor irritations that have weakened your psychic defenses. Maybe you got a late start, skipped breakfast, and are plain hungry. Or perhaps you got caught in a downpour on your way to work this morning and your socks have been dishearteningly damp all day.

It’s wise to prepare for such contingencies; this is why many people keep energy bars and aspirin in their desk drawer. If it’s a long haul from home, you’re not crazy for keeping a change of clothes (or at least some fresh socks) at the office as well.

In other cases, through no fault of their own, the problem really is your colleagues. Suppose Iris, in the next cubicle over, has been tasked with calling the references for several applicants for the upcoming fellowship. You’re dreading spending the afternoon listening to her ask, over and over, what each candidate’s strengths are, and what they could stand to improve on. (Then again, if overhearing all that sounds unfun, think about how Iris must feel.)

Your drawer might not include a soundproof door you can put between your desk and hers, but if you can’t scoop up your laptop and relocate to someplace quieter, then it should contain some spare headphones.

When it’s simply not cool

There are times when the issue is not that you need to take a deep breath and reclaim your office zen, but that your coworkers are acting out of line. If someone is being disrespectful or underhanded, the solution is not to find a way to smile and let it go.

Acting angrily won’t help in such situations; you need to think carefully about who you can take the problem to and how you’ll explain it, so don’t be hasty. Where the issue concerns other people who are unlikely to speak out, it’s especially worth handling thoughtfully.

Here, all that practice staying level-headed and cool will serve you well.

ProfessionalsThe New Rules for Communicating Confidently at Work in 2022

ProfessionalsStarting Your Career? Here's How to Graduate from Academic to Professional Writing
Writing, grammar, and communication tips for your inbox.