Epigraph: Definition and Examples of This Literary Device 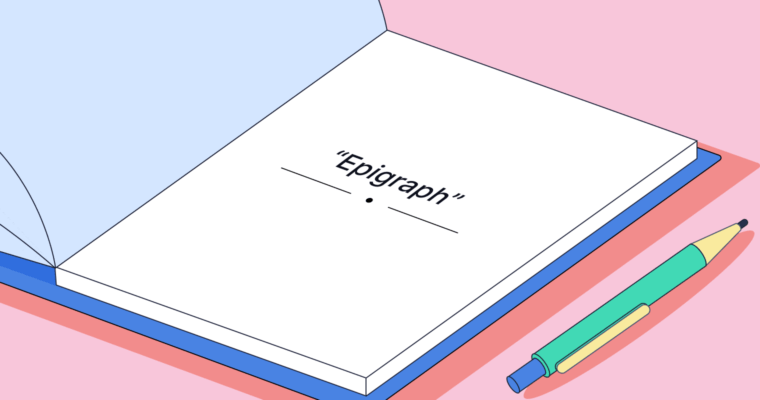 At the beginning of Chinua Achebe’s 1958 novel Things Fall Apart, there is a page with four lines from a W. B. Yeats poem:

Turning and turning in the widening gyre The falcon cannot hear the falconer; Things fall apart; the centre cannot hold; Mere anarchy is loosed upon the world.

These famous lines are the book’s epigraph. An epigraph is a short quote that a writer uses to set up the literary work that follows. In this example, the poem is about a society on the brink of apocalypse. By introducing the story with this reference, the writer prepares readers to enter a world full of disruption and disorder.

What is an epigraph in writing?

An epigraph is a short quote placed at the beginning of a piece of writing. The word epigraph is derived from the Greek epigraphein, which means “to write on,” and it was meant to describe a brief inscription on a building or statue.

What is the purpose of an epigraph?

Writers use epigraphs for different reasons. Sometimes an epigraph is a nod by one writer to another—an acknowledgment of someone who influenced or inspired them. As a literary device in novels, an epigraph can set up a theme, create context, or expose important information.

Sometimes, a writer uses an epigraph from a story or poem with a similar theme to their own story. By placing this reference toward the beginning, the writer immediately clues a reader into their book’s thematic undercurrent. This can also be a way to foreshadow later events.

Context and theme often intersect in epigraphs as a writer builds out their story and provides information about the narrative’s driving force. For instance, the epigraph in Harper Lee’s novel To Kill a Mockingbird is this Charles Lamb quote: “Lawyers, I suppose, were children once.” This gives the reader a hint at one of the book’s themes of childhood innocence, and it places the story in a legal context (in the story, the main character’s father is a lawyer, and the plot revolves around a trial).

The epigraph to Mario Puzo’s novel The Godfather is this Balzac quote: “Behind every great fortune, there is a crime.” With this explicit epigraph, the reader is immediately aware which side of the law the main character is on.

Epigraphs come in many forms, including prose, proverb, poetry, lyrics, and even dialogue. The main stipulation is that it comes from someone outside the book—not the author or the characters.

If the writer is using an epigraph to acknowledge a major influence or inspiration, then a direct quote from that person might do the trick.

If the writer wants to place their story in the lineage of a literary tradition, then they could choose a line or two from an influential author or literary work.

If the writer wants to convey a theme with their epigraph, then using a line from a work with a similar theme will prime the reader.

How to use an epigraph in your writing

There aren’t established rules for including an epigraph, which gives writers a lot of creative autonomy. Some things to consider if you want to include an epigraph in a story:

Who or what is your inspiration for the story? If you have been heavily influenced by a specific writer or artist, then an epigraph may be a nice place to acknowledge them.

Are there any well-known works that have a similar theme? If so, including an epigraph from that work will clue your reader into your own theme.

Could the reader use more information? Maybe you are limited by a word count or a deadline, and you think the reader could benefit from more information than you’re able to provide. In this case, an epigraph might be a good way to concisely add extra reference material.

Is this story part of a lineage? Acknowledging the literary tradition that your story falls within can be done effectively with an epigraph. By referencing a piece of writing within a tradition, you help the reader draw a connection between your work and someone else’s.

Epigrams and epigraphs not only sound alike but also have confusingly similar forms. Both are short statements, leave a strong impression in a few words, and are often used by writers, poets, orators, and politicians.

The difference between epigraphs and epigrams is that an epigraph is a reference to someone else’s work, and it serves a literary function, while an epigram is an original statement by the speaker or writer, and its function is to stick in the audience’s memory. Epigrams make great epigraphs, but not the other way around.

For example, some memorable epigrams are:

“Beauty is only skin deep, but ugly goes clean to the bone.” —Dorothy Parker

“Did I request thee, Maker, from my clay To mould me Man, did I solicit thee From darkness to promote me?” —John Milton, Paradise Lost

Fear and Loathing in Las Vegas by Hunter S. Thompson

“He who makes a beast of himself gets rid of the pain of being a man.” —Samuel Johnson

“If they give you ruled paper, write the other way.” —Juan Ramón Jiménez

“The family is like the forest: if you are outside it is dense; if you are inside you see that each tree has its own position.” —Akan Proverb

My Year Abroad by Chang-rae Lee

“Without heroes, we’re all plain people and don’t know how far we can go.” —Bernard Malamud, The Natural

“He who truly loves the world shapes himself to please it.” —Thomas Mann, Confessions of Felix Krull, Confidence Man

“Music in the soul can be heard by the universe.” —Lao Tzu

“You are all a lost generation.” —Gertrude Stein

What is an epigraph?

An epigraph is a short quote included at the beginning of a piece of writing. It is meant to introduce the reader to a theme, reference, or context.

What is the purpose of an epigraph?

An epigraph in a novel introduces a reader to a story’s theme, provides extra context, or exposes information. It is also a place for writers to acknowledge their influences or inspirations.

What’s the difference between an epigraph and an epigram?

An epigraph uses a quote from another person or character in a story. An epigram is a quote by the work’s author.

What are the different kinds of epigraphs?

Epigraphs can take many forms. Some popular choices are phrases, poems, dialogue, and lyrics. Really, any quote that serves your writing can be used as an epigraph.