English Words from Around the World

Brittney Ross
Updated on May 19, 2022Grammar 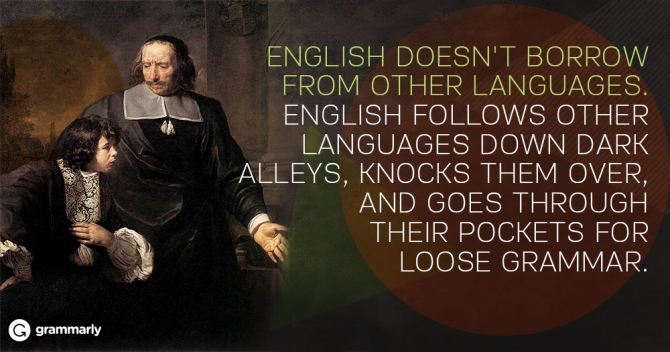 The vocabulary of modern English owes a lot of its richness to borrowing words from other languages, but it borrows from some languages much more than others. We have only one word of Finnish origin in common use, but it’s a good one. Sauna, a direct import from Finland, pulls double-duty as our word for a relaxing steam bath and as the perfect way to describe gloriously hot, humid summer days. Here are some other great words with international origins:

Which came first: the color or the fruit? In English, believe it or not, it was the fruit. The word first appeared in English at the end of the fourteenth century, around the time the fruit was making its way into western Europe. Like so many other words, orange entered English by way of French, but the roots of the word stretch back to the Dravidian languages of southern India. It took another 150 years or so after the first introduction of orange for it to become the word for the color, too. Before then, the English-speaking world had to make do with saying yellow-red or red-yellow. Ever wonder why we call someone with orange hair a redhead? If orange had come along earlier, perhaps today we would call them “orangeheads” instead. Well, maybe not . . .

Students of Latin or Greek can probably decipher the original meaning of disaster by looking at its roots: dis- (negative, bad, not) and astrum (star). Long ago, it was commonly believed that the position of stars and planets directly affected our daily lives here on earth. So a sudden calamity or misfortune was often blamed on the influence of a “bad star.”

We can thank the folklore of Haiti and the West Indies for contributing one of the most terrifying and popular creatures in the modern horror genre: the zombie. But the origins of zombie may not have been so scary. The word can be traced back to West Africa, and possibly derives from a Kongo word meaning “god.”

Ketchup wasn’t always a tomato-based condiment. Once upon a time, mushrooms were the main ingredient. In fact ketchup isn’t always even ketchup. If you live in the southern United States, you may spell it catsup. The etymology is murky, but the word seems to descend from a word meaning “pickled fish brine” in the Amoy dialect of southeast China. The word may have made its way into English after entering Malay as kēchap.

The prefix al- offers a clue about the origins of this word. Like alchemy, alcohol, alcove, and almanac, algebra is a descendant of Arabic (al is the definite article in Arabic, like the in English). Algebra is a combination of al- and jabr, meaning “the restoration of broken parts.” Algebra appeared occasionally in Middle English as a medical word, specifically in relation to fractured bones, but this meaning was quickly overtaken by the mathematical one.