Where Do Ninjas, Zombies, and Robots Come From? 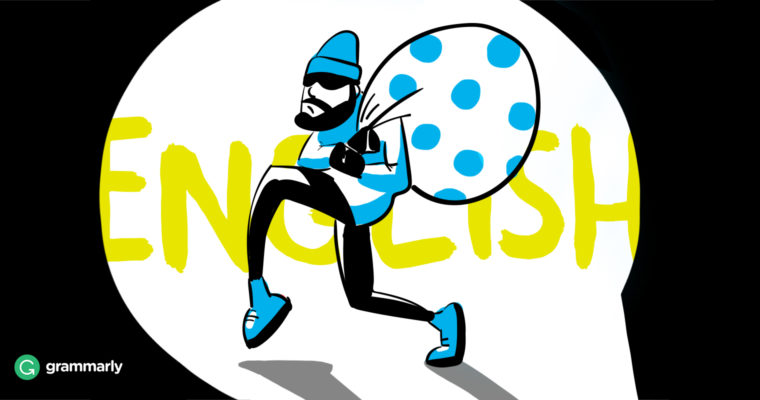 English is a language made up almost entirely of other languages. Between the fifth and seventh centuries, tribes from lands that would become Germany, Denmark, and the Netherlands showed up in Britain. The languages they spoke developed into Middle English, butted heads with Old Norman (pre-French), and, in Shakespeare’s time, got a dose of Latin and Ancient Greek. Along the way, individual words from a host of other languages were added to the mix.

Nowadays, we use all sorts of words we don’t even realize come from other languages. And with the amount of communication, travel, and migration across great distances happening today, the evolution continues.

Here are ten loanwords—words “borrowed” from other languages and incorporated into English, often with a slightly tweaked meaning—to illustrate the huge amount of non-English in the English language.

Originating in the Dravidian languages of southern India (that’s Tamil, Malayalam, Kannada, and Telugu), aiyo is one of the newest English additions. It was adopted by the Oxford English Dictionary in October 2016 and defined, simply, as a phrase “expressing distress, regret, or grief; ‘Oh no!’, ‘Oh dear!’.” But according to commentators from southern India and Sri Lanka, where the phrase originates, “Oh dear!” doesn’t come close to capturing the range of meanings it can convey. Many extreme emotions can be expressed with these sounds, from disgust to fear to joy. So many meanings in one exclamation—aiyo!

In Arabic, al-kohl (الكحل) originally meant a fine powder of certain chemicals, and Latin adopted the word alcohol in the thirteenth century. Since fine powders were thought of as being “distilled” from other things (based on how people thought about alchemy and medicine in the Middle Ages), the meaning merged with other things that had been distilled. The word showed up in English in the sixteenth century, and by the mid-eighteenth century the “spirit of wine” was in full swing.

Let’s face it: “chock-lit” is easier to pronounce than cacahuaquchtl. That sweetest of sweets came to English by way of Spanish, but started out as an Aztec beverage made of cocoa powder (try saying cacahuaquchtl five times fast) and other spices—not the sugary treat we’re used to today. That’s one theory; others postulate that it comes from Aztec words for “bitter water,” or Nahuatl for “beaten drink,” or that cacahuaquchtl was changed by Spanish conquistadors to combine the Maya word chocol (hot) and Aztec atl (water). Why? Because caca can mean another thick, brown thing in Spanish, and no one wants to be mixing up chocolate with feces.

The thing that makes the world go round goes way back (understandably). Middle English adopted moneie from the Old French word monoie, meaning “coinage, metal currency.” Even farther back, there’s the Latin word monēta, meaning “place for coining money” or “coin,” which comes from the goddess Juno Moneta, who was worshipped in a temple in or near a mint. There’s proof for folks who think money is divine.

In English (and especially Hollywood), a ninja kicks butt in all black and a mask. But in the original Japanese, a ninja was a spy—not a sneaky martial-arts maniac like we’re used to seeing, but one who was supposed to blend in. Today, “ninja” retains its warriorlike connotation, but it’s also used in a range of situations to imply stealth, cunning, and skill. Just ask a kitchen ninja, tech ninja, or gaming ninja if you don’t believe it.

Most penguins waddle their tuxedo-clad selves around the Southern Hemisphere, but the word “penguin” is believed to come from the Welsh pen gwyn, meaning “white head.” Sure, penguins don’t have white heads, but the name was originally used for the now-extinct great auk, which also didn’t have a white head, but did have white spots around the eyes. When sailors rounded the tip of South America around 1580, they spotted a “foule, which the Welsh men name Pengwin”—that is, a bird that resembled the great auk. It’s still known by the name the Welsh sailors bestowed upon it nearly five hundred years ago.

A long time ago, in a galaxy over in Central Europe, robots emerged as the brainchild of a Czech sci-fi writer in the 1920s. Long before C-3PO and R2-D2 roamed the galaxy, Karel Čapek’s play R.U.R.—short for “Rossum’s Universal Robots”—introduced the idea of artificial people created to work for “real” humans. And (spoiler alert) they end up rebelling against humanity. Since robota in Czech means “labor, drudgery,” it’s hard to blame them. And that idea clearly sticks in the imagination, since robots are about as common as warp drives and lightsabers.

In American English, “schmuck” is an insult; it basically means “fool” or “idiot,” but with a slightly harsher and more Yiddish ring to it. However, it derives from the Yiddish word shmok, which means “penis,” so some Jewish communities consider the word extremely vulgar. In another twist, shmok is believed to come from Old Polish smok, meaning “grass snake, dragon.” Maybe that’s where J.R.R. Tolkien got the name for Smaug, who is definitely a smok in terms of fire-breathing deadliness, but not exactly a schmuck—though Bilbo Baggins might not agree.

This originally German word, complete with umlauts (über), traveled a windy road before it arrived at its present-day English meaning. Its literal German meaning: “over.” Figuratively, it implies that something or someone is bigger or better (like the Übermensch, a kind of philosophical Superman). It first got used in English to mean “very, super.” For example, “I’m über excited” or “that party was über cool.” Today, of course, many city-dwellers know it as a way to get a ride with a few taps of a finger.

This one’s origin is a little uncertain—but chances are you’re not going to be pondering etymology if one of them is trying to eat your brains. The word probably comes from a West African language: zumbi means “fetish” in Kikongo, and nzambi is a word for “god” in Kimbundu, but the idea arose—not from the dead, but for the first time—in Haiti during centuries of slavery. The idea was that slaves who committed suicide to save their bodies from the cruelty of their masters would be condemned to wander for eternity, undead. The brain-eating part came later.

English has borrowed plenty from other languages, but it’s a two-way street: words like le weekend in French, párking in Spanish, and intānetto (Internet) in Japanese are becoming increasingly common around the world. Whether you see language evolution as uber cool or something to cry aiyo! about, understanding how linguistic borrowing takes place can make you a real language ninja.