Duking it Out: Parentheses vs. Dash

Writing that engages—that grabs—on occasion makes use of both parentheses and dashes (or, it should). These two types of punctuation have been duking it out for many years. Proponents of each argue about which is the most understandable to modern readers.

Can parentheses and dashes be used interchangeably? Should writers prefer one to the other? Are dashes suave and parentheticals clunky?

Parentheses separate explanatory or qualifying remarks from the rest of a sentence. The information inside the parentheses is typically not necessary to fully understanding the sentence. For example, “The summer solstice (between June 20 and June 22) is the longest day of the year.” Using parentheses to interject the possible dates of the solstice, as they vary from year to year, adds helpful information to the sentence. But those dates are not strictly necessary; the sentence was fine without them. 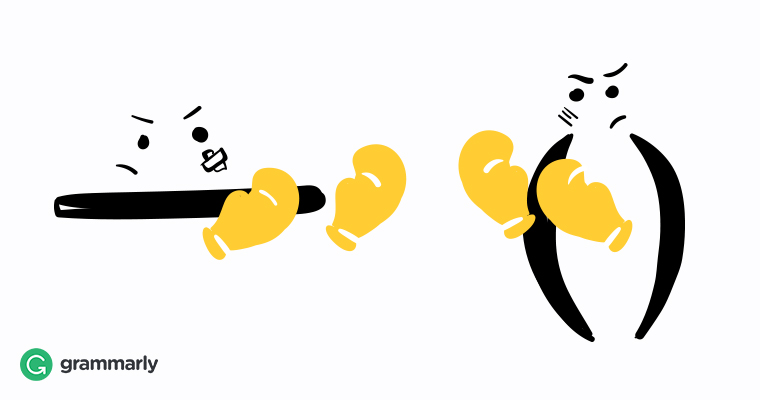 Do parentheses, then, make sentences unnecessarily wordy? In looking at the AP style guide, we find that the popularity of parentheses is on the wane. As a matter of fact, the AP would prefer that you stop using parentheses entirely. After all, why include an aside in your writing (jarring to the reader) when you can just compose two sentences? Let the parentheses die a quiet death, alone and unused. This is the main for shelving parentheses, at least.

The em dash, on the other hand, marks an abrupt change of thought in a sentence. It has rapidly become the Swiss army knife of punctuation. It can mark pauses for dramatic effect, express contrary emotions, connect dates, denote a quote’s author, replace a colon or semicolon, and even wrap up a series of phrases that need a conclusion.

Dashes are versatile, all right, but they can also disrupt the flow of a sentence. Too many of them can give your reader mental whiplash. That’s what dash detractors usually argue, anyway.

Which type of punctuation do you prefer in your writing? Should we jump on the AP’s bandwagon and learn to love the dash? Or, do parentheses still have a place?

We invite your comments in this debate.