Dragged or Drug—Which Is Correct? 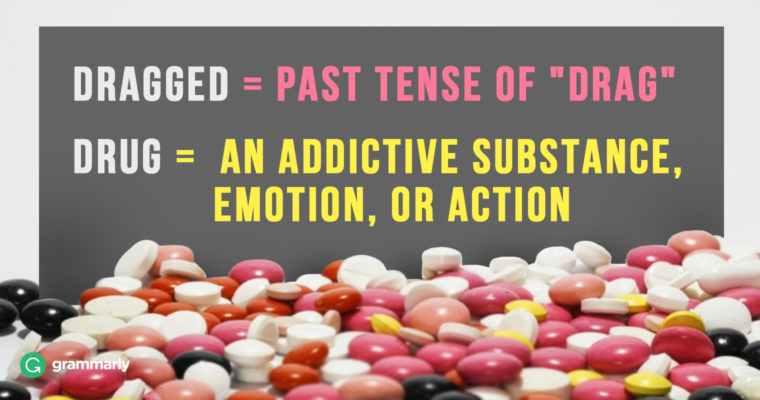 The recognized and correct past tense form of the verb drag is dragged. Drug can still sometimes be heard, but only in certain dialects within the United States.

How to Use Drag and Past Tense of Drag

For the majority of English-speakers, drag is a regular verb used in a couple of different ways, but always having to do with movement. So we can say we drag ourselves home after work, we drag our dogs to the vet, or we drag our tables across the floor, but we can also drag a field or drag as in drag race.

Being a regular verb, the past participle of drag is made by adding the suffix -ed and doubling the g at the end of the infinitive. If you do all that, you get dragged, which is the widely accepted past tense of the verb drag. It’s also the verb’s past participle.

Where Does Drug Come From?

Drug is used in some American dialects as the past participle or past tense of the verb drag. It’s not one of those things where British English and American English differ—dragged is still the recognized past participle of the verb drag in the US. But, especially in some southern parts of the country, drag is sometimes treated as an irregular verb, and that’s where we get drug.

Which Form Should You Use?

Dragged is always the safer bet. If you live in or are passing through a town and you hear a lot of people saying drug, you can switch to it if you like. But all in all, drag is a regular verb, and there’s no need to complicate it.

Two pilots were dragged out of the cockpit and arrested moments before their plane was set to take off over fears they were drunk. —NEWS.com.au

This is the extraordinary moment a passenger was dragged along a station platform after getting her hand stuck in a train door. —The Daily Mail

Terrified tourists in China were dragged screaming across a dizzying glass walkway—suspended hundreds of feet in the air over a canyon. —The Daily Mirror

She refused to exit the vehicle and was drug out of the vehicle. —Merrill Foto News

To that extent, Networx was handicapped out of the gate when the licensing process was drug out over 18 months by telecoms like Time Warner, which wanted to prevent Memphis from obtaining a competitive edge in the industry. —Memphis Flyer