Treasure Doving? The Past Tense of Dive 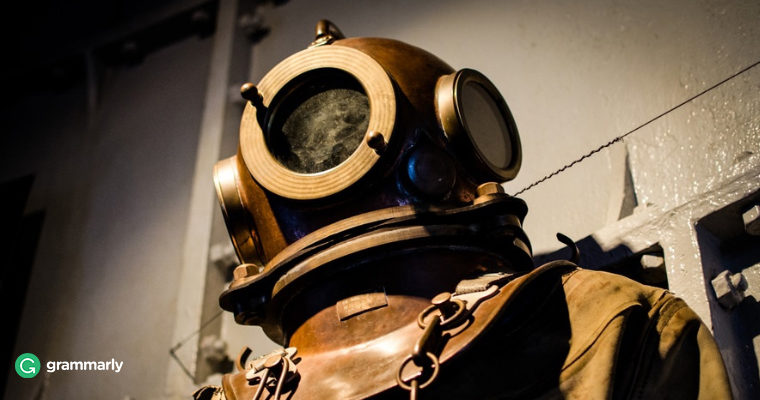 Dive on in to get the details on the difference between dived and dove.

What it means and how it conjugates

To dive is an verb meaning: To swim under water To jump into water head-first To descend sharply or steeply Or, figuratively: To undertake with enthusiasm, or to plunge into a subject, question, business, etc.

Here’s how it looks when you conjugate it:

As you can see, dove and dived are both accepted as past-tense conjugations of the verb. Which one you choose depends a bit on where you’re doing your diving, but grammatically, neither one will make your readers dive for cover.

Just avoid diven. You may say “I drive, I drove, I have driven,” but stick to dived when present perfect and past perfect tenses get involved.

Now let’s talk pronunciation. The past-tense verb dove, which has to do with jumping into water, looks a lot like the noun dove, which is a symbolically peaceful type of bird. The words are homographs, meaning they’re spelled the same but have different meanings and (in this case) different pronunciations. The bird version has an “uh” sound to rhyme with “shove” or “glove,” while the verb has a hard “o,” same as the “o” in “nose.” That’s a good way to remember how to pronounce it, but unfortunately “nosedove” hasn’t caught up with dove in being accepted as a newfangled past-tense formation. (“Took a nosedive” is probably your safest bet, at least grammatically).

Even though the rules about which form to use are relatively lax, it’s kind of confusing to have two separate versions of one verb. But it wasn’t always like this.

According to the juicy rumors of the etymology world, dove originated about two hundred years ago. Dived had been the accepted form before that, but dove dove into existence (ha) as a closer parallel to analogous past tense forms, like drove for drive and wove for weave. If you think dived sounds weird, “I drived home after work” sounds even kookier.

Outside North America, dived is the more common variant; some of our friends across the pond would cringe at the newfangled dove.

Here are some examples with different meanings of dive from some British (or old-fashioned) books and publications.

To move downward quickly: “[T]he bewitched keys darted and dived so quickly it was almost impossible to catch one. But not for nothing was Harry the youngest Seeker in a century.” —J.K. Rowling, Harry Potter and the Sorcerer’s Stone, 280

To experience rapid deceleration: “Its shares dived 5.5% after it said like-for-like revenues had risen 1% in recent weeks, compared with 2.8% growth in the three months to 30 April.” —BBC

To plunge into water: “Oh, Ahab! what shall be grand in thee, it must needs be plucked at from the skies, and dived for in the deep, and featured in the unbodied air!” —Herman Melville, Moby Dick, 122)

And, for good measure, let’s dive on over to the other side of the pond.

To descend quickly and (here) aggressively: “Then he was up, pulling Lex back onto her feet, and running with Tim a few feet forward while overhead two more birds wheeled and dove toward them, screaming. At the last moment, he pushed the kids to the ground, and the big shadows flapped past.” —Michael Crichton, Jurassic Park, 313 To start work enthusiastically: “Jack dove into the project, hiring chemists and experimenting with different mixes of natural latex, organic essential oils, and water to see what he could create.” —Forbes

And, again, to plunge into water: “A maid-of-honor in Stroud, England, dove into a lake in her bridesmaid dress to save a gosling from a swan that was trying to drown it.” —The Huffington Post

Dived and dove are both accepted past-tense forms of the verb to dive. Dove is used more frequently in the United States and Canada; dived is more common outside North America. The word usually means plunging into water, but don’t forget about its figurative uses. Don’t pronounce dove (the verb) the same as dove (the bird).