How to Discuss Films in English 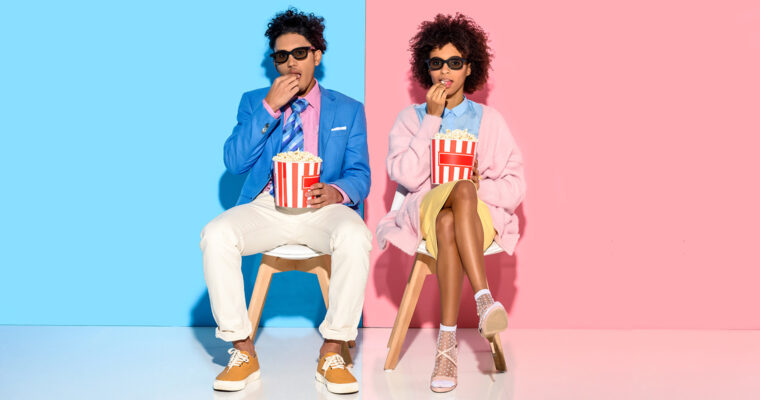 Everyone loves films, and cinema is an important part of our culture. Watching a movie is a great way to practice your English listening skills and can help you with other areas of language as well. Read on for some handy film vocabulary.

Before you watch a film, you will often watch trailers. These are the short advertisements for other films that you see before the main feature.

“I want to get to the cinema on time so we don’t miss the trailers.”

The genre is simply the type of film. There are many genres of film, such as action or drama. Here are a few that might be useful to know:

Also called period dramas, these dramatic films are set at different times throughout history, and feature elaborate costumes and sets. Examples include Pride and Prejudice and Elizabeth.

A thriller is a dramatic film, usually involving action and a large amount of suspense. Famous thrillers include The Usual Suspects and Vertigo.

A tearjerker is a term for a sad film – one that is likely to make you cry. Classic tearjerkers are It’s A Wonderful Life and Bambi.

A cameo is a brief and unexpected appearance from an actor or another famous person.

“I really enjoyed Mike Tyson’s cameo in The Hangover.”

A spoiler is a piece of information that reveals part of the film to someone who hasn’t seen it. When you’re talking about a film, be careful not to give away any spoilers.

“I was going to watch the Sixth Sense, but I’ve heard too many spoilers.”

A director’s cut is a different version of the same film, usually truer to the director’s personal vision.

“I prefer the Blade Runner director’s cut as it has a much better ending.”

If you’re watching a DVD, there will sometimes be a bloopers or “gag reel” option in the extras. These are the funny moments from filming when the actors got their lines wrong or were having fun on the set.

“The bloopers were the funniest thing about that film.”

The next time you watch a film, try and use some of these terms when you talk about it afterward.