Did your writing skip a grade? 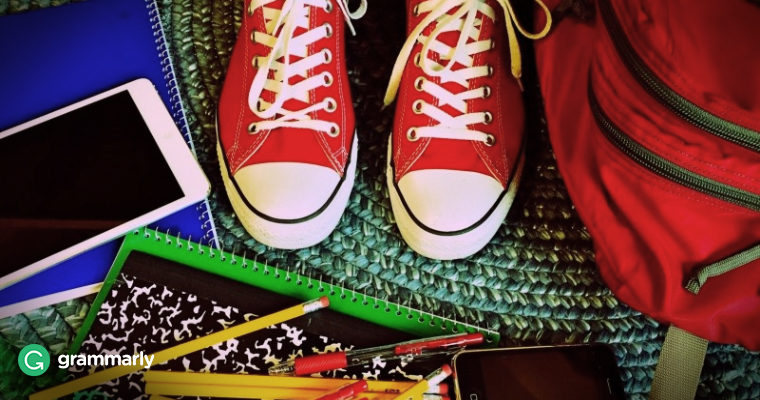 Today we celebrate some of the most important people in our society—teachers!

On National Teacher’s Day, it’s customary for younger students to bring their teachers apples or more modern gifts. Of course, the best way to thank teachers is by using the information they’ve taught us. As is evident from the show Are You Smarter than a 5th Grader?, we are still occasionally missing the mark.

In honor of National Teacher’s Day this year, let’s revisit some of the most important writing lessons we learned in elementary school.

The basic rule here is that pronouns must agree in number with the noun to which they refer.

Sometimes sticking with this rule is easy because the pronoun and the noun are close together in the sentence and the usage is clear: Jane forgot her lunchbox. But sometimes, things aren’t so simple. Indefinite pronouns like neither, anyone, or all sometimes tempt us to use a plural when we should use a singular.

Let’s look at an example: “Neither of the girls remembered her lunchbox.”

It’s tempting to use the pronoun their instead of her, because the closest noun is girls. But the true antecedent is actually the indefinite pronoun neither, which should be treated as a singular whenever possible.

At times, it’s not possible to treat neither as a singular. For example: “Neither Jane nor David remembered their lunchboxes.” In this case, you can’t use the singular his or her because neither pronoun applies to both Jane and David. Some writers will use the plural pronoun they in sentences like this, but many readers still consider it an error. It’s often better to rewrite the sentence to avoid the awkward wording: “Jane and David both forgot their lunchboxes.”

Have you ever heard something like, “Please save a seat for both Jack and I”? Does this sound correct to you? If so, you might be one of the frequent offenders. Here’s a quick and easy trick to make sure you always get this right. All you have to do is look at the noun (in this case, “Jack”) and the pronoun (“I” or “me”) individually. Try temporarily removing each one from the sentence.

For a more complete but still simple explanation, check out the eLearn English Language website.

For example: “I organized all of the books that were in the blue box.”

If you tried to use “which,” remember that “which” requires a comma: “I organized all of the books, which were in the blue box.” The sentence no longer says what it said to start, right? We’ve changed the meaning, so “which” is incorrect.

Another example: “I went to my first class, which was a good decision because we had a pop quiz.” Here, the comma makes sense, so “which” makes sense. You get the picture.

In this article on Lit Reactor, the author gives 20 examples of common mistakes that we all need to start getting right, including “That vs. Which.”

In looking at your writing, do you find that you missed a grade?

If not, thank a teacher.

BasicsWhat Is a Writing Assistant?

Basics5 Clever Ways to Say “Nice to Meet You” in Writing

BasicsHere's How to Know the Difference Between Miss, Mrs., and Ms.

BasicsHow To Use "Sincerely Yours" in an Email
Writing, grammar, and communication tips for your inbox.
View Comments