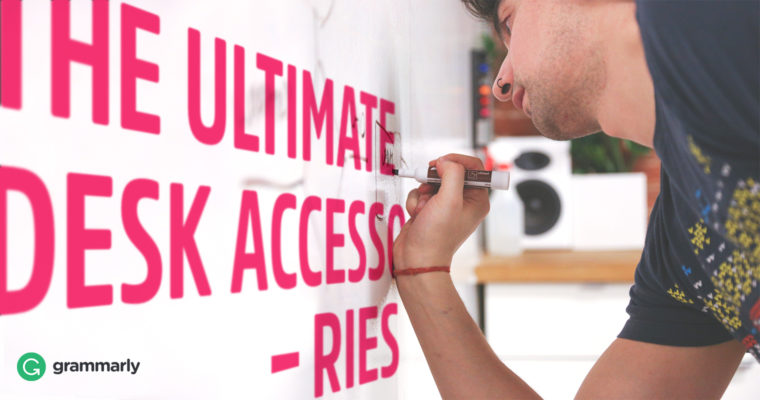 Does it matter what’s on your desk? A study published in Psychological Science indicates the answer is yes! The study reported associations with the state of one’s desk and generosity, creativity, and even healthy eating. However, most employees (and their bosses) concern themselves most with productivity.

Which of these eight desk accessories would boost your productivity at work?

It’s no surprise that standing rather than sitting burns more calories, but did you realize that a standing desk can increase your productivity? Take a look at a case study: Researchers provided half of a group of call center employees with standing desks while the other half continued to use standard desks and chairs. After six months, the employees who used stand-capable desks were almost twice as productive as those who performed work duties from a seated position. The study also revealed that the standing desk users became significantly more productive over time, perhaps as their body acclimated to working in a standing position.

The fidget spinner is a small device that you can spin with your fingers. Before they hit the market as a toy, therapists used them to help students with ADD or other attention disorders to channel their pent-up energy. How might this gadget affect your productivity? Elaine Taylor-Klaus, the co-founder of a coaching service for the ADHD community, said they address “the need for constant stimulation.” She continues: “What a fidget allows some people . . . to do is to focus their attention on what they want to focus on, because there’s sort of a background motion that’s occupying that need.” Instead of daydreaming or wandering away from your desk, a fidget toy may be just what you need to keep you on task.

Dual monitors save time. Have you ever composed a report using information from an email? Or compared two digital images in different windows? Or scrolled from right to left on a large spreadsheet? A second monitor would have eliminated the need to switch back and forth between windows or applications. How much would that affect your output? Considerably, according to a New York Times report: “Survey after survey shows that whether you measure your productivity in facts researched, alien spaceships vaporized, or articles written, adding an extra monitor will give your output a considerable boost — 20 percent to 30 percent, according to a survey by Jon Peddie Research.”

If the budget doesn’t cover a second monitor, a Mountie is the next best option. Instead of a monitor, the second screen is your smartphone! Mounties attach your phone to the frame of your portable computer. Then, you can check emails, receive notifications, and refer to web pages on your phone at eye level. The only downside is that Mountie doesn’t work with desktops yet.

Noise-canceling headphones foster productivity for two reasons. First, they discourage coworkers from interrupting you because you look occupied. Second, they live up to their name! Without the constant chatter, bangs, and clangs of your work environment, your ears are free to listen to whatever music gets you motivated to face your daily challenges.

Is there a particular toy or item that brings back good memories from your childhood, university, or college days? In an article for Huffington Post, Erica Heppler, Ph.D., describes nostalgia as “the warm, fuzzy emotion that we feel when we think about fond memories from our past.” Nostalgia reduces stress and uplifts you because it brings the positive feelings of your past into your current mood. Another benefit of nostalgia is its power to strengthen social connections. Your treasured object may engender the same sentiments in your clients and fellow employees. “Hey, we have something in common!” they may exclaim. And voilá, you’ve opened the way for a conversation and built rapport. What a great excuse to buy an Etch-a-Sketch! Photographs of loved ones, pets, or vacations also serve the same function.

Has it ever taken you more than five minutes to find a lost file or office utensil? If you add all the minutes you lost searching for things on your desk, you might be astounded at the amount of time you wasted. Get a file sorter and a desk tray to organize your work tools. Of course, those items won’t help you if you don’t train yourself to put things back where they belong when you finish using them.

Plants are beautiful, but that’s not their only nice quality. Evidence from two separate scientific studies supports the connection between desk plants and efficiency. A research study reported in the Journal of Environmental Psychology tested participants’ performance on an assessment of “attention capacity” at three different intervals. The results? “Participants in the plant condition improved their performance from time one to two, whereas this was not the case in the no-plant condition.” A second experiment revealed that plants seemed to “provide a restorative potential.” Plants also clean the air of pollutants.

If you want to be more productive, take a good look at your desk. With a few accessories, you can maximize how much you get done in a workday. Naturally, you’ll need to give attention to your habits too. Work Simply: Embracing the Power of Your Personal Productivity Style by Carson Tate will get you started.