Strategies to Deal With Chronic Interrupters 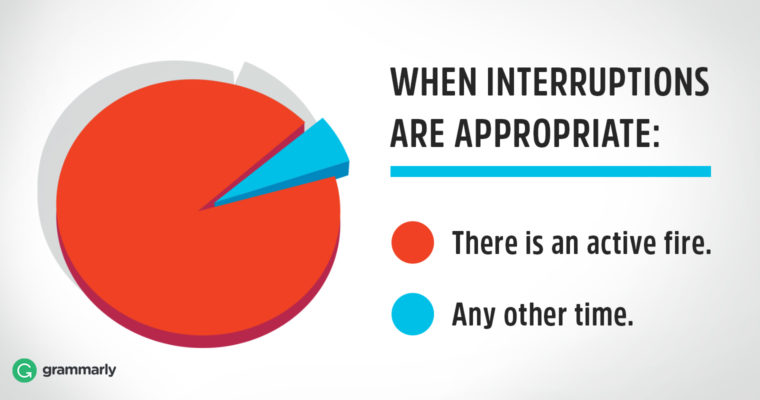 Getting interrupted is no fun. Whether it’s at work or with a friend or family member, being the interruptee can make you feel disrespected and unheard. The good news: there are strategies for dealing with interrupters.

First, approach the situation differently based on the context and kind of interrupting. Here are some examples:

Some of these interruptions are worse than others, and there’s a reason. In fact, there are deeply ingrained sociological and linguistic factors explaining why some people are more likely to get interrupted than others.

The science of interruption

According to studies by linguists, sociologists, psychologists, and others (in other words, there have been a lot of studies), people most likely to be interrupted are women, minorities, and people considered lower on the totem pole. White, heterosexual men are the most frequent interrupters, and there’s a biological reason and a social reason for that.

Here’s the biology: according to linguistics research, men tend to think of a conversation as a competition: the more you say, the better you played the game. But women treat conversations as collaboration: if everybody talks, everybody wins.

It’s not universally true that white men go around interrupting everybody else. But those linguistics studies were getting at something, which brings us to the social reason: people who belong to a social group that’s used to having power might act with an unconscious bias. That’s where the word “mansplaining” comes from. Not all men do it, but then, not all men who do it realize they’re doing it.

Let’s get something straight: an interrupter isn’t necessarily showing disrespect or dismissal. But if someone thinks, even subconsciously, that it’s okay to interrupt someone else, that can underline a difference in status that can make the interruptee seem less assertive, less in control, and therefore less likely to get a promotion or other signs of recognition.

Which tactic you use depends on the person you’re talking to and the context of the conversation, so use your best judgment. Whether it’s a one-time thing or merits a bigger confrontation, here are some ways to get started.

There are a few ways to let the interrupter know that they interrupted and get the floor back. Just be careful how you say some of these, because they can come across as passive aggressive or actually aggressive if you don’t watch your tone.

If the interruptions keep coming, it might be time to sit down with the interrupter and talk about it. You’ll do this differently depending on who the person is.

With a boss or someone higher in status:

In situations where you’re not potentially risking your job if you say things wrong, it’s still important to be polite, and most importantly, not sound like you’re blaming or attacking the interrupter.

If you have the conversation but the interrupter keeps interrupting, don’t despair. Habits die hard. If it’s someone in the workplace, wait a few weeks, then bring it up again. If it’s a co-worker you’re friendly with, maybe raise an eyebrow when they interrupt, or use the “I was just getting to that” line.

If you have a friend or family member who’s a repeat offender, try making it playful. Keep a tally of interruptions. Ring a bell whenever they interrupt—that’ll get their attention. Have a money jar: a quarter for every interruption. Why not make some cash from their irritating habit?