What Is a Correlative Conjunction? 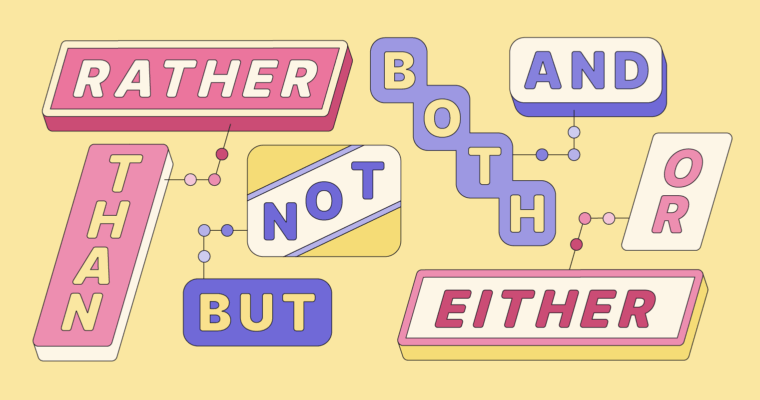 Communicate with confidence
Your writing at its best
Write with Grammarly

What is a correlative conjunction?

Though they can illustrate a correlation between the two words or phrases, they don’t necessarily have to. In many cases, the words or phrases linked by a correlative conjunction can be discussed independently of one another. In these cases, joining them with a correlative conjunction makes your writing more concise and emphasizes that the two things being discussed happen in close succession, at the same time, or as a result of the same cause, or that they’re both distinct possibilities or outcomes of a shared cause or starting point.

Take a look at these sentences that use correlative conjunctions:

We could either hike up the mountain or swim in the lake this afternoon.

Whether you bike or drive to work, you’ll need to show your parking pass.

Not only did my boyfriend buy me a Nintendo Switch, but he also bought me a bunch of games!

Before we go deeper into correlative conjunctions, let’s do a quick refresher on conjunctions as a part of speech. Conjunctions are words that link phrases, clauses, and words together in sentences. Words like and and but are conjunctions. When you use a conjunction in a sentence, the words or phrases it links need to have parallel structures. Here’s an example of a conjunction at work:

She drives slowly and cautiously.

And can be a correlative conjunction when it’s paired with another conjunction like both. Take a look at this example:

Both my cat and my dog like bacon-flavored treats.

Let’s take a look at a few example sentences:

Either you’re with me or you’re against me.

Such is the intensity of the pollen outside that I can’t leave the house.

My parents went to both Hawaii and Bali last year.

She would no sooner cheat on an exam than falsify her credentials.

They would rather go to the movies than the mall.

What does a correlative conjunction do?

Because of the bad weather, the class missed both their history and English exams.

They not only ate all the donuts but also drank all the coffee.

I wasn’t sure whether the play was disjointed or avant-garde.

He was late to work because there was traffic.

When should you use correlative conjunctions?

Use correlative conjunctions when you have two distinct yet connected concepts in a sentence. If you and your roommate both tend to wake up early, an efficient sentence to communicate this is “Both my roommate and I wake up early.”

I wasn’t hired at any of the companies I’d applied to. Neither my experience nor my skill set seemed to impress the interviewers. So I’m going to explore opportunities in a completely different field.

You can remove the second sentence and the paragraph will still make sense. However, that middle sentence adds detail and context. Here’s another example of correlative conjunctions in a transition sentence:

My goal is to earn a PhD. Whether I get into my dream school or I get accepted somewhere else, that’s my plan. After that, who knows what I’ll do?

When you’re using correlative conjunctions, subject-verb agreement is a must. All this means is that the verb in the sentence is conjugated to match the noun or pronoun that is its subject. Take a look at this example:

How to use correlative conjunctions

She was such an amazing cook.

In this sentence, the word “such” is an adverb because it’s modifying the adjective “amazing” by amplifying it. But the word “such” can also be a correlative conjunction—when it’s paired with the word “that.”

She was such an amazing cook that she won over even the pickiest eaters.

See how the pair of correlative conjunctions demonstrates the cause and effect in this sentence? You can also split the sentence in two:

She was such an amazing cook. She won over even the pickiest eaters.

We can infer the cause and effect here, but linking these sentences with correlative conjunctions makes the relationship between her cooking and her picky eater–converting skills clear.

My brother is either playing video games or writing music on his PC.

We received neither the package nor the invoice.

Jenna not only plays the violin, but also sings professionally.

We invited both the Rodriguezes and the Losapios to dinner.

There were as many applicants as there were seats in the program.

I could no sooner answer him than he called me back.

The kids would rather eat ramen than scrambled eggs.

Every single one of these sentences can be reworded to remove the correlative conjunctions and still make sense, but they might get longer or lose some clarity. For example, we can rework the last example to “The kids would eat scrambled eggs, but would prefer ramen.” No meaning is lost, but the version with the correlative conjunctions emphasizes the kids’ preference for ramen by placing it ahead of the scrambled eggs.

What is a correlative conjunction?

Correlative conjunctions are pairs of conjunctions that connect words or phrases that are the same part of speech or serve the same function within a sentence.

How are correlative conjunctions used?

Correlative conjunctions are used to make writing flow more easily, reduce redundancy, and make the relationship between equal words or phrases within a sentence clear. Although they can be used to allude to cause-and-effect relationships, they don’t have to be. Compare these two sentences:

What are common correlative conjunction pairs?

When you need to show the relationship between two equal elements in a sentence, use a pair of correlative conjunctions. When you need to double-check your work to see if you missed any grammatical mistakes or if your tone isn’t quite what you wanted, run it through Grammarly. Our writing assistance tool catches mistakes and detects the tones in your work, then offers suggestions to make your writing even stronger.

StudentsHow to Write a Bibliography, with Examples

StudentsHow to Write a Research Paper Outline In 7 Steps

Writing TipsHow to Write a Five-Paragraph Essay, with Outlines and an Example
Writing, grammar, and communication tips for your inbox.