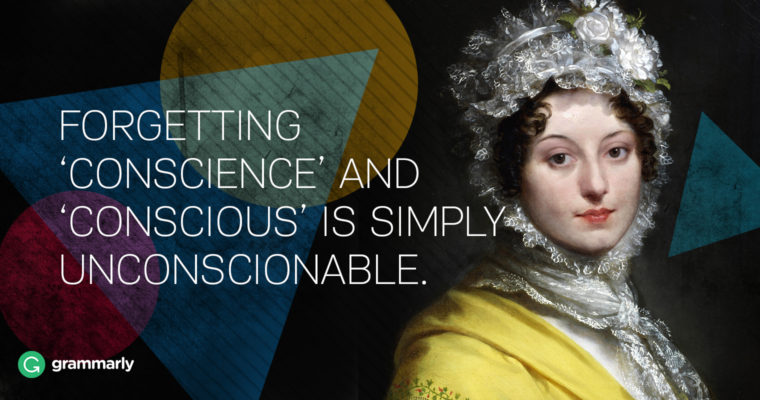 English is anything but a straightforward language. Words that look alike but actually mean something slightly different are a common source of confusion. Take conscious, conscience, unconscious, and unconscionable. All are derived from the same root, so it’s natural to assume that the first two are the opposite of the last two. But use them interchangeably like this and you are likely to confuse (and possibly amuse) your listeners.

Conscious means “aware or alert.” This word can be used to convey a fundamental biological state (“Hey, I’m awake!”), or it can be used to describe a bit more than just basic awareness:

He was conscious of the fact that nobody was talking to him.

The opposite of conscious is unconscious. And, like conscious, unconscious doesn’t have to relate to awareness or lack thereof. In fact, you can be wide awake but also unconscious, or unaware, of something:

New to the country, Fred was unconscious of the etiquette and began eating before the main host.

Now, conscience doesn’t describe your level of alertness, but instead your inner voice, the one that guides you between right and wrong—the proverbial angel on one shoulder winning out (ideally!) over the devil on the other.

She could have easily pocketed the fresh $20 bill, but she was guided by her conscience and told the waiter that there was money hiding under a napkin.

Something that is unconscionable, on the other hand, is not guided by morality but by an utter lack of it. In other words, an unconscionable act is one that is so unethical that, for many, it is unthinkable.

The harshest forms of punishment tend to be reserved for the most unconscionable acts.

Unconscionable has also taken on another meaning over the years, one that doesn’t relate to conscience. Something that is unconscionable might also be unreasonable or excessive. There doesn’t necessarily have to be any ethical violation.

Many believe that paying 50,000 per year in college tuition is unconscionable .

As long as you’re conscious of the differences above, you don’t have to knock yourself out or bother your conscience to figure out which of these four words to use.

“What she has said is unconscionable, and ‘hurtful’ barely scratches the surface.” —Slate

“Popes do not endorse political candidates, though he urged Catholic voters to ‘study the proposals well, pray and choose in conscience.’” —Associated Press

“Cognitive science backs up the ancient Indian philosophy that we’re conscious even in deep sleep.” —Quartz

“Your brain can be tricked, and some of the best tricks are the unconscious kind that influence your thinking without you ever realizing it.” —Forbes

This post was written by Chris Lele, resident GRE expert at Magoosh, a leader in GRE prep. For more advice on taking the GRE, check out Magoosh’s GRE blog.