What Is a Compound Sentence? 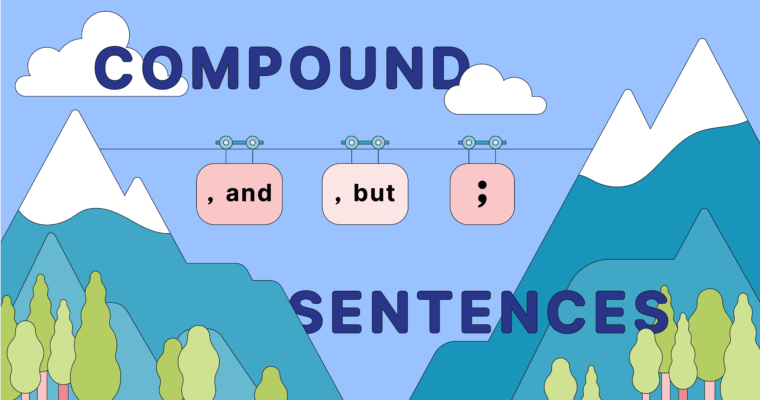 ​​A compound sentence is a sentence that connects two independent clauses, typically with a coordinating conjunction like and or but. They’re best for combining two or more self-sufficient and related sentences into a single, unified one.

What is a compound sentence?

(If you’re unfamiliar with these terms, please check out our guide to clauses in English, which better defines what makes up a clause.)

Compound sentences are easy to identify because they usually use a coordinating conjunction, which you may remember as FANBOYS: For, And, Nor, But, Or, Yet, and So. However, compound sentences can also use a semicolon to connect two clauses, in which case no conjunction is necessary.

Let’s look at some compound sentence examples to see how they work.

Below are two simple sentences. Both are independent clauses because they each have their own subjects and verbs.

I have a pet iguana; his name is Fluffy.

To combine them into a compound sentence, we simply add a comma plus the coordinating conjunction and.

I have a pet iguana, and his name is Fluffy.

Alternatively, we can make a compound sentence by adding only a semicolon and the sentence is still correct.

I have a pet iguana; his name is Fluffy.

I have a pet iguana whose name is Fluffy.

“I alone cannot change the world, but I can cast a stone across the water to create many ripples.” —Mother Teresa

Be careful of sentences with two subjects or two verbs—these are not the same as compound sentences. The following sentence is not a compound sentence because there is only one subject and because what comes after the conjunction “and” is not an independent clause:

I came here to chew bubble gum and study grammar.

However, you can turn this sentence into a compound sentence by adding another independent clause with a second subject:

I came here to chew bubble gum and study grammar, but I’m all out of gum.

Keep in mind that imperative sentences don’t always show their subjects because they’re assumed. That leads to compound sentences like this example:

Get me some water, or the fire will spread!

Let’s look at some more compound sentence examples from some of history’s greatest writers:

“Nature does not hurry, yet everything is accomplished.” —Lao Tzu

“Be yourself; everyone else is already taken.” —Oscar Wilde

“You will face many defeats in life, but never let yourself be defeated.” —Maya Angelou

Commas and punctuation in compound sentences

When creating compound sentences, there are two punctuation rules to keep in mind:

1 Place a comma before the coordinating conjunction.

2 If you’re not using a coordinating conjunction, place a semicolon between each clause.

As always, you use a lowercase letter to start the second independent clause. Since compound sentences are a single sentence, only the first letter of the first clause is capitalized.

Mastering these punctuation rules is crucial for creating compound sentences. Without them, your sentence becomes a dreaded run-on sentence. In writing, run-on sentences are not only grammatically incorrect, but also they’re difficult for your reader to understand.

To avoid both run-on sentences and confusingly long compound sentences, try to limit the number of clauses in a sentence to two or three. In situations when you need more than three clauses, keep them as short as possible by removing unnecessary words. Remember, short sentences are easier to understand and give your writing a faster pace.

It’s easy to get compound sentences confused with complex sentences; both use two or more clauses in a single sentence. The most significant difference, however, is the type of clause they use.

I am working now, but we will eat later.

Because I am working now, we will eat later.

Be careful, though, because a sentence can be both complex and compound at the same time! A complex-compound sentence occurs when a single sentence has at least two independent clauses and at least one subordinate clause.

After I got home from work, my friends invited me out, and I left my apartment again.

In this example, after I got home from work is the subordinate clause (you can tell because the word after appears at the front). Both my friends invited me out and I left my apartment again are independent clauses, joined by the coordinating conjunction and. Put all three clauses together with the proper punctuation and you have a perfectly correct complex-compound sentence.

The rules about different clauses and how to combine them can get complicated, even for lifelong English speakers. It takes some practice to get used to, especially learning all the different coordinating and subordinating conjunctions.

If you feel unsure about your English, you can always use a writing assistant like Grammarly. Our writing suggestions point out any grammar mistakes you might have missed, including run-on sentences and missing commas before conjunctions. This feedback ensures your writing is clear to your readers.