Lindsay Kramer
Updated on May 12, 2021Grammar 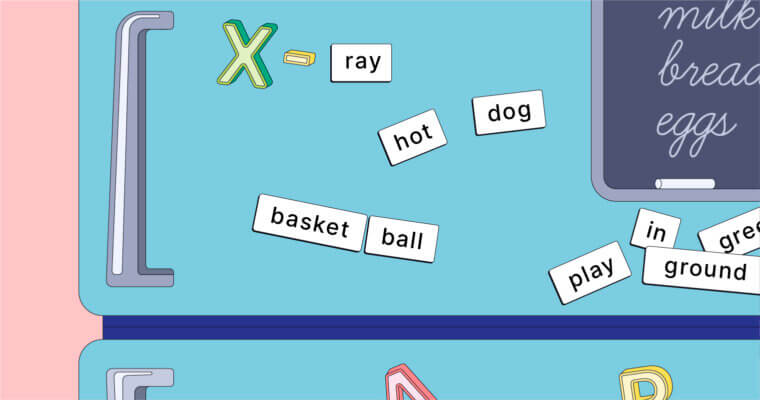 At first glance, the concept of a compound noun is simple. It’s a term composed of two or more individual nouns stuck together.

Compound nouns are a constant, everyday part of speaking and writing in English. In fact, they’re so ubiquitous in English that you might not even realize that some of the terms you use every day are compound nouns. Software, sunrise, and backpack are but three examples.

How to make a compound noun

Every compound noun is two or more words that come together to form a noun. These separate words don’t necessarily have to be nouns themselves; all they have to do is communicate a specific person, place, idea, or thing. A compound noun can be a common noun (fish sticks), a proper noun (Pizza Hut), or an abstract noun (lovesickness).

Here is a quick, at-a-glance guide to the types of compound nouns:

There are a few different ways to form a compound noun. Sometimes, two words are simply smashed together. These are known as closed compound nouns, and examples include:

And then there are the compound nouns that don’t connect in any way. These are known as open compound nouns, and include the following:

Even though the words are not connected, these are still compound nouns because they communicate distinct concepts when paired as a combination.

Know the rules for compound nouns

What’s the difference between a compound noun and a noun paired with another word?

Certain compound nouns are homophones with two-word phrases. Two examples of this are green house vs. greenhouse and white paper vs. white paper. No, the second example is not a mistake on our part. While a sheet of white-colored paper can be referred to as a “white paper,” the term white paper also refers to a technical guide or report that covers its author’s position and expertise on a specific topic.

Typically, a compound word places stress on the first word. Listen to yourself say the following words aloud:

When two words simply exist beside each other in a sentence, they generally receive the same amount of stressing. Try saying these aloud:

Hear the difference? You stressed the first part of each compound word automatically and paused for a beat between the two words.

How do I pluralize compound nouns?

If you followed Bigfoot back to his cave and met his family, would you refer to them as Bigfoots or Bigfeet? Or would the plural form be the same as the singular form, and you’d meet a group of Bigfoot?

According to internet Bigfoot enthusiasts, the correct plural form is “Bigfoots.”

That’s because irregular nouns are only irregular when they stand alone. “Bigfoot” is a distinct word from “foot,” and as such, it’s not subject to the same rules as “foot.” Similarly, the plural of “football” is “footballs,” not “feetballs.”

Generally, you pluralize a compound noun by pluralizing the semantic head, the part of the word that conveys its primary meaning. Because a mother-in-law is primarily a mother, this word is pluralized as mothers-in-law. Similarly, box office becomes box offices, passerby becomes passersby, and doctor of philosophy becomes doctors of philosophy.

However, there are compound nouns that aren’t pluralized this way—at least not usually. Certain compound nouns, namely ones that refer to units of measurement like cupful and teaspoonful, traditionally pluralized their semantic heads. But in some modern dictionaries, these words are made plural by simply adding an “s” to the end, i.e., Merriam-Webster prefers cupfuls instead of cupsful and teaspoonfuls instead of teaspoonsful.

How do I know how to form a compound noun?

Look it up. And if you’re working with a specific style guide, such as the Chicago Manual of Style or the Associated Press Stylebook, look up the correct way to form it according to this specific guide because sometimes, different guides call for different formats or spellings. To use our white paper example again, some style guides write it as one word: whitepaper.

Compound noun formations can vary between American and British English, too. For example, the type of car known as a racecar in America is called a racing car in the UK.

What about brunch, a combination of breakfast and lunch?

How about crystal-clear? Nope, that’s a compound adjective.

Compound nouns aren’t always easy to navigate. Grammarly can help you ensure you’re using them correctly (and effectively!) by catching any mistakes, off-the-mark wording, and less-than-optimal tone in your work. Give it a try today.