Career Advice From 7 Popular Creatives Who Made It Big

Joanna Cutrara
Updated on
May 27, 2019Professionals 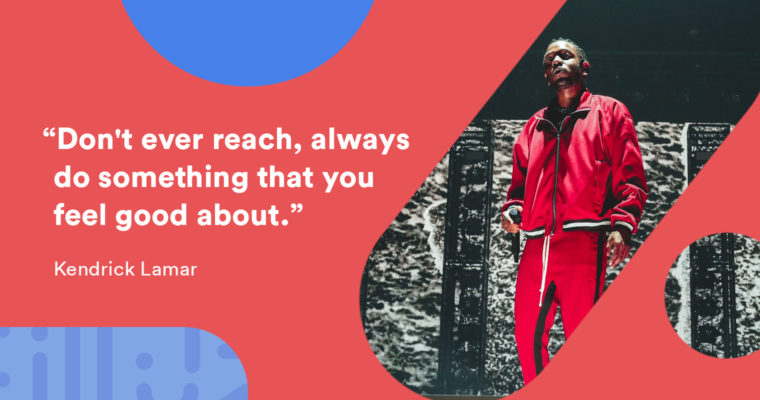 Do you dream of becoming a writer or using your writing skills to gain success in your industry? It’s easy to look at creatives who’ve “made it” and forget that not so long ago they were in the exact same place as you are.

We all start with humble beginnings and big dreams, and seeing our path from point A to point Z can be difficult. Fortunately, there’s plenty we can learn from our fellow creatives. Here are key insights from seven creatives on how to work through setbacks, fears, distractions, and procrastination to build a career for yourself.

Then she created her web series Adventures of Awkward Black Girl which garnered A-list attention. She says:

Stop making excuses. You’re the only one stopping you. Because I had to hear that myself… I’m excuse queen, I’m procrastination queen, I’m all of those. And I would always talk about how I wanted to make this happen, I wanted to put a show out… I want to be a writer and a producer.

.@IssaRae is the first black woman to create and star in a premium cable series #SheIsTheFirst https://t.co/YoX6zJYqoj

You may know this Oakland-born writer-director from Fruitvale Station, Creed, or perhaps that Marvel film, Black Panther, that smashed every box office record its path and unseated Titanic to become the third highest grossing film of all time.

As a writer and filmmaker, Coogler’s projects are immense in scope and intensity, and burnout is a real concern. The solution? Don’t settle for what other people want you to do, or what you think you should be doing—choose projects that you’re truly passionate about.

…it’s important to me to always work on projects that have things that I’m passionate about in them. This work is so all-consuming that to do this job right, you have to throw yourself at it 24 hours a day for years at a time.

So that’s kind of what I use as a safeguard that I’m never on a project that I get burnt out from and stop caring … I try to always make movies about something that I’m obsessed with and about things that I have questions about.

Ryan Coogler, the director of #BlackPanther is 31 years old. His career is just getting started. We get to look forward to DECADES of movies from him. https://t.co/SxIpNu4oPW

3 Abbi Jacobson: Do It Yourself

The only problem? They weren’t getting cast in any of the group’s comedy shows. Frustrated with being shut out, they decided to create their own creative outlet through a web series called Broad City which eventually caught the attention of Amy Poehler.

When we started making the web series, it came out of feeling very powerless in becoming what we wanted to become, not being able to get parts or get seen or heard as a performer or comedian. We both found ourselves in this spot where, when you want to make something like this, you have no other option but to go full-force or not at all.

If you’re getting shut out, or there isn’t currently a platform that showcases what you’re doing—make your own.

If there’s anyone who knows success, it’s multi-hyphenate Donald Glover. The Emmy and Grammy award-winning writer-actor-director-producer-songwriter-rapper has defied fitting into anyone else’s box while creating a career for himself. His advice to creatives:

Define success for yourself early. And it can change, it’s okay. But just like know that success is something that you define for yourself and it can’t really be defined by anyone else for you. You have to believe in yourself. . . know what you’re getting out of it. Do what you want. Be cool with it. Be okay. Like yourself.

Don’t listen to those outside voices telling you what your work or career is “supposed” to look like. Do what you love, and focus on achieving what you set out to do.

You may know him from Netflix’s Mind of a Chef or Ugly Delicious, or have picked up a copy of the New York Times best-selling food magazine Lucky Peach (RIP). This James Beard Award-winning chef relentlessly pushes the envelope on all fronts and has been busy growing his restaurant empire.

Chang’s first restaurant, Momofuku Noodle Bar, has been described as an “anti-restaurant,” with decor and service being low on the priority list, and food being the top focus. When asked by GQ why he thought this renegade restaurant would work, he replied:

I didn’t think it was going to work! . . . It was almost like I went into it acknowledging I was going to become a statistic and go out of business, so why not throw caution to the wind and do whatever the [hell] you want.

And in doing that, in accepting failure, you free yourself up and become emboldened to make unconventional decisions and go against the accepted ways of doing things.

When we start playing big instead of limiting ourselves to playing it safe, it’s amazing what becomes possible.

Generally considered the greatest rapper of his generation, Lamar boasts twelve Grammys and in spring of 2018 made history as the first rapper to win the Pulitzer prize for music.

His advice for staying focused in a competitive industry?

Don’t ever reach, always do something that you feel good about. Don’t do it because you want to get signed or you want a distribution deal because at the end of the day, that doesn’t last. What lasts is something that is 100% true to yourself. You get so twisted and tangled in singles and how many streams the other cat gets, you lose vision of the creative process…

“I’ve been writing my whole life, so to get this type of recognition – it’s beautiful.” See Kendrick Lamar accept the Pulitzer Prize https://t.co/gUQx19vWtB pic.twitter.com/iWpR0s7lsP

7 SZA: Use Your Setbacks As Fuel

It took a lot of hard work, patience, and even anger for neo-soul singer SZA to arrive at the point where she could create Cntrl, her billboard-topping, platinum record.

When people trash you, you’re forced to look at yourself and be like, ‘OK, you have to get better.’ What does getting better mean? Well, you don’t know what getting better means. Stop trying to figure out what it means and watch the process and just learn.

So I sat and I learned and then I got angry because so much was happening in the meantime. People were putting their albums out, and I was getting looked over again and again and again. I was just like, “I feel like I’m disappearing into the ether, like I’m not important.” At times, I was like, “Maybe I shouldn’t make this.” But that anger turned into commitment into being.

Instead of comparing herself to others or getting hung up on her setbacks, SZA chose to dig deep and use those challenges as fuel for achieving success.

What’s one small step you can take right now toward achieving your dreams?