How American English and Canadian English Are Different

Nikki Piontek
Updated on May 19, 2022Grammar 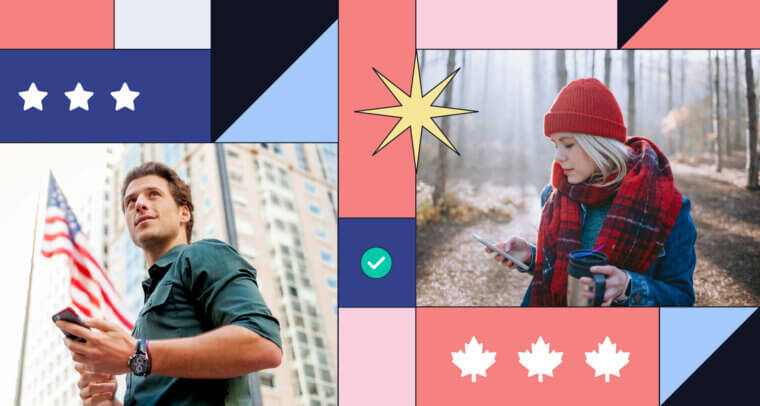 If you put an average Canadian and an average American in the same room, you may not pick up on the subtle differences between their accents—especially if the American was from one of the northern states near the Canadian border—like Wisconsin, Michigan, and Minnesota—where Americans tend to emphasize their vowels. However, if you take a closer listen to these two English dialects from neighboring countries, you’d be surprised to find out that they have quite a few differences in their use of the English language.

You may notice that Canadian English prefers to use “ou” in words like “humour” and “behaviour” as well as flipping the American use of “er” to “re” in certain words like “theatre” and “centre.” Canada isn’t alone in preferring these spellings. British spellings of these words are taught across most of the world.

Another difference between American English and Canadian English is in how each adds suffixes to words. Canadians prefer to use double consonants, while Americans keep their consonants single. For example, Canadians will turn “travel” into “travelled,” but Americans will use “traveled” instead.

The United States uses its own customary system of units. Canada, like most of the world, officially uses the metric system.

That does not, however, always transfer into practice, especially in everyday conversation. For example, many Canadians still prefer to announce their baby’s weight in pounds, rather than kilograms, and Canadian dealerships may advertise a car’s miles per gallon, even though their speed-limit signs are in kilometers per hour.

We cannot discuss the difference between American and Canadian English without touching on question tags. Like nearly all languages across the world, Canadians and Americans both use question tags. However, Canadians tend to endure more flak for theirs. Canadians can turn any statement into a question by adding the question tag “eh.” As in: “Making hamburgers for dinner, eh?”

Americans often do this same thing by adding a casual “huh” or “right” to the end of sentences. Maybe these dialects aren’t so different, huh?

Though Americans and Canadians easily understand one another, there are a few vocabulary differences that cause some confusion. For example, a Canadian acquaintance puts on runners while an American one prefers to use sneakers. Americans may be surprised that, when a Canadian friend talks about paying their hydro bill, they mean their electric bill. If you find yourself in Canada around Victoria Day, expect to see Canadians celebrating with 2-4s, which references a 24-pack of beer.

It’s worth a mention that, though American and Canadian currency are both counted in dollars, they each refer to their currency in slang terms using animals native to their respective countries. Canadians have given their bird-adorned coins fun nicknames: loonies (single-dollar coins). However, if you’re in the United States, single-dollar notes are often referred to as bucks; some historical accounts explain this may have referenced how buckskins were once a form of currency.

It’s important to note that both English and French are listed as official languages of Canada; some parts of Canada mainly use Canadian French. Surprisingly, this hasn’t affected Canadian English much outside of those regions. Even within those areas, its influence is limited to personal preference.

Canadian English and American English are both considered phonologically North American English, meaning that they are difficult to tell apart—some would even say they’re indistinguishable. However, if you spend time listening to these two dialects, you’ll find that there are actually quite a few delightful differences beyond accents. How about that, eh?

>>Read More: How to Select Your English Dialect | Grammarly Spotlight