Karen Hertzberg
Updated on
May 28, 2019Lifestyle 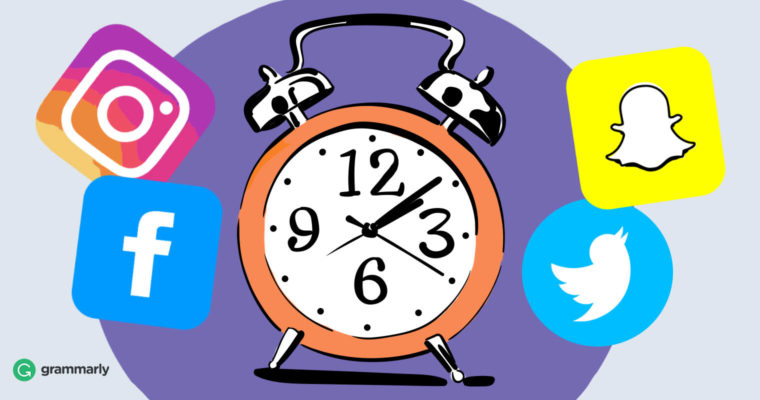 Whether you’re representing yourself or an entire corporation, social media is a loudspeaker for your brand. But how well your signal is received can depend a lot on when you broadcast it. Are you posting to social media at the best times to get your message heard?

What’s the Best Time to Post to Social Media?

Everybody who uses social media wants to share posts that will engage their audience. We work to create witty, informative, or thought-provoking content to encourage website visits, likes, shares, and comments. But sending even our best efforts out to the world at random times can produce mixed results.

The reality is, the ideal time to post to any social media is when your audience is most likely to be listening. The challenge lies in figuring out when those times are.

Here’s a tip: Want to make sure your writing always looks great? Grammarly can save you from misspellings, grammatical and punctuation mistakes, and other writing issues on all your favorite websites.
Although we’ll get to some data in a moment, it’s important to keep in mind that there are no absolutes when it comes to social engagement. Research may show that Friday and Saturday nights after 8 p.m. are the among the worst times to post on Facebook, but if you’re the brand manager for a nightclub, that might be a good time to reach people who are looking for things to do while they’re out on the town. It’s worth experimenting with, at least.

The best time to post can depend on a number of specific factors. What’s your industry? Is your audience found primarily in a specific regional area or time zone? Do they have particular habits that might influence when they’re online?

Knowing your audience is key. When are they likely to check their social media accounts? Business people might be in the habit of checking in during their morning commute on some social channels and at lunchtime on others. Pinterest users might take a leisurely browse for inspiration after dinner time.

What the Data Says

Although knowing your audience is crucial, there’s still a ton of data to suggest that some times are better for social media posting and engagement than others. Although much of the research on social media metrics is contradictory, it still provides a good starting place for those seeking out the best times to post.

Let’s have a look at what research has uncovered for each social media platform according to CoSchedule.

Facebook is the largest social network in the world with 500 million active users of whom 50% log in on a daily basis. So, it is no wonder why marketers are interested in figuring out how to reach their target audience using Facebook. —KissMetrics blog

If you want to score with your Facebook audience, post toward the end of the week. Compared to other weekdays, engagement increases by eighteen percent on Thursdays and Fridays, and it shoots up thirty-two percent on Saturdays and Sundays.

Here’s a tip: Dig into your page’s Facebook analytics or use a tool like Fanpage Karma to discover when your fans are most likely to be online.

In general, Twitter gets more attention during the workweek. Twitter users tend to treat their feeds as an information source during downtimes like commutes or lunch breaks, although how and when Twitter is used varies by audience—B2B markets fare better on workdays, while B2C markets do best on weekends.

The best times to tweet are weekdays between 12 and 3 p.m. There’s also a peak time at 5 p.m. during the evening commute, when users are 181 percent more likely to be on Twitter.

Here’s a tip: Twitter Analytics can help you determine when your tweets get the most action. Tools like Buffer can help you schedule tweets automatically at optimum times.

Of LinkedIn’s 467 million worldwide users, 40 percent use the professional social network daily. It’s no secret that LinkedIn users check in during the workweek when professional connections are on their minds, although the best times to post are before and after work. (Maybe that’s because we worry about what our bosses might think if they catch us updating our profiles.)

LinkedIn’s hot time occurs during the middle of the week, with the best times to post falling Tuesday through Thursday between 5 and 6 p.m. Midweek mornings (7-8:30 a.m.) and lunchtime are also solid choices.

Here’s a tip: Don’t forget about time zones. Are you connected primarily locally, or hoping to extend your reach nationwide? In the US, 80 percent of the population lives in the Eastern and Central Time zones. Focus there to reach the widest audience.

Pinterest is a unique market that defies conventions. Reaching Pinterest users involves understanding the people who use the network. Men account for just 7 percent of the total pins. Although the median age of a Pinterest user is forty, the majority of active pinners are younger than forty.

Which types of pins are hottest depends on the day of the week. Here’s the breakdown according to CoSchedule:

The best time to post to Pinterest is later in the evening between 8 and 11 p.m., especially on Saturdays. The platform seems particularly unpopular during the workweek.

Here’s a tip: A call-to-action is important to get users to engage with your pin. According to CoSchedule, 80 percent won’t respond if you don’t encourage them to click with a CTA.

RELATED: 3 Ways to Save Time on Social Media

Instagram users engage all week long, with the exception of Sundays. Mondays and Thursdays seem to be the most winning days. Post between 8 and 9 a.m. and around 5 p.m., but avoid the end-of-day time slot between 3 and 4 p.m.

Here’s a tip: Posting a video at 9 p.m. will get you 34 percent more interactions than any other time of day. In general, post videos any day between 9 p.m. and 8 a.m.

According to CoSchedule, Google+ is a network of lurkers—90 percent of G+ users won’t engage with your content. But that doesn’t mean you don’t want to try to get them to click. Like LinkedIn, Google+ is used primarily by professionals. During the workweek, early in the day, is the best time to post. You’re likely to get the best results on weekdays between 9 and 11 a.m., especially on Wednesdays.