What is Assonance? Definition and Examples of this Literary Device 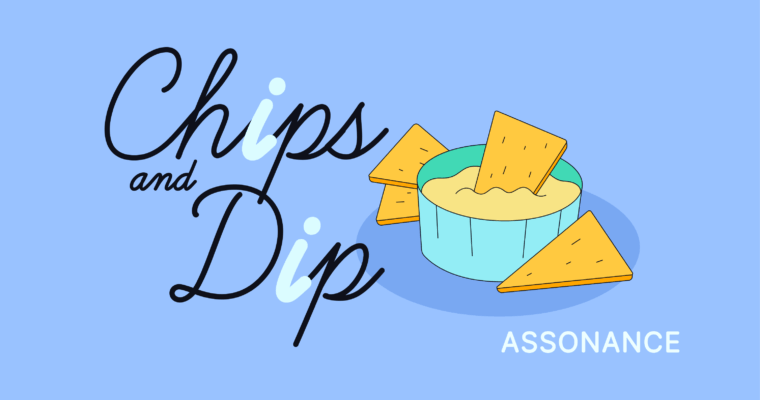 Usually, we think of reading as a silent activity. But often, there are sounds happening inside our heads. When we read, we recognize the way words are articulated next to each other. You don’t need to read a Dr. Seuss poem out loud to know which parts rhyme; you can intuitively hear that “ham,” “Sam,” and “am” are interacting with each other.

Writers can take advantage of this audible quality using assonance. Assonance is the repetition of vowel sounds in words that are close to each other in a sentence or phrase. The repetition created by assonance enhances your writing with rhythm, mood, and emphasis.

Assonance is sometimes called “vowel rhyme” because its effect on a reader is similar to that of a rhyme. And sometimes assonance creates outright rhymes, as it does in this expression:

The “ai” sound is repeated to make a catchy phrase, and it happens to rhyme. But assonance is also a way for writers to create rhythm and repetition without rhyming. For example, in this line from Shakespeare’s “Sonnet 1”:

“Heir” and “bear” rhyme, but they are aided by the repetition of the “eh” sound in “tender” and “memory.”

4 ways assonance is used in writing

As a literary device, the main job of assonance is to create rhythm. That’s why you’ll find many examples of assonance in poems and song lyrics. Assonance can also be sprinkled throughout prose to stress certain words, build a mood, and give prose a poetic quality.

1 Rhythm: Assonance is most commonly used to create rhythm. Hip-hop lyrics lean heavily on assonance because of their generally tight structure and fast pace. Since assonance is looser than a rhyme, it creates a rhythm without being overbearing. For example, think about this lyric:

“I was in a dark room, loud tunes, looking to make a vow soon.”

The “oo” sound repeated in the words “room,” “tunes,” and “soon” not only creates a rhythm but also generates a sense of urgency. Pushing all these sounds close together places the listener, or the reader, in the claustrophobic party scene that Lamar inhabits. Even though “room” and “tune” don’t technically rhyme, their vowel sounds are close enough that they create a similar effect.

2 Mood: Repeated vowels also have a psychological effect on the reader and can generate a certain mood. A double “o” sound is spooky; a double “e” is screeching. Think about this phrase: “The squeaky wheel gets the grease.” Can you feel the eeky squeal of the squeaky wheel?

3 Emphasis: Assonance can alert a reader to crucial words throughout the work.

“Do not go gentle into that good night

Old age should burn and rave at close of day Rage, rage against the dying of the light.” —Dylan Thomas, “Do Not Go Gentle into That Good Night”

The assonant words in this verse are “age,” “rave,” “day,” and “rage.” These four words tell the reader a lot about the mood and the message of the poem.

4 Poetic prose: Poetic rhythm and musicality don’t have to be limited to poetry. Threading assonance through your writing creates interesting, attention-grabbing turns of phrase. As with any literary device, too much of it will come off as gimmicky or annoying. Use it when you feel that a poetic touch could add something to your writing.

What’s the difference between assonance, consonance, and alliteration?

Some sources define assonance as any repetition of sounds close to each other, but American English conventions limit the definition of assonance to include only vowel sounds. The repetition of consonant sounds is called consonance.

“We are a society strangling in unnecessary words.”

Did you notice the repetition of the “s” sound? It’s in “society” and “strangling,” but it’s also in “unnecessary” (twice) and at the end of “words.” William Zinsser’s book On Writing Well is instructional, but it never feels dry. That’s because Zinsser knows how to use literary devices, such as consonance shown in the above sentence, to keep the writing as entertaining as the content. For the record, “strangling” doesn’t make sense there—Zinsser is using wordplay to make his point.

Like assonance, alliteration uses the repetition of similar sounds to create an interesting effect. With alliteration, the repeating sound is placed at the beginning of the word, and it can be made up of vowels or consonants: “She sells seashells by the seashore.” With assonance, the sound’s placement in the word doesn’t matter, but it has to be made by vowel sounds.

Think about this line by Greg Tate in a 1998 Vibe article about Joni Mitchell:

“Keep your eyes on the prize.”

“A rolling stone gathers no moss.”

“Good day in my mind, safe to take a step out

“Tryin’ to reach my goal, my power of speech unimpeachable

Only nineteen, but my mind is older These New York City streets get colder, I shoulder Ev’ry burden, ev’ry disadvantage.” —“My Shot” from Hamilton

“Soft language issued from their spitless lips as they swished in low circles round and round the field, winding hither and thither through the weeds.”

—James Joyce, A Portrait of the Artist as a Young Man

“. . . about the glade in a frail agony of grace she trailed her rags through dust and ashes.”

“The mailman still hands me bills like I should be lucky.”

—Hanif Abdurraqib, “Watching a Fight at the New Haven Dog Park, First Two Dogs, and Then Their Owners”

“A bat cracks in the flickering background

and we’re dead tired from the horse track.” —Ada Limón, “The Good Wave”

Assonance is the repetition of vowel sounds in words that are close together in a sentence or verse. For example, “His tender heir might bear his memory” (William Shakespeare, “Sonnet 1”). The “eh” sound in “tender,” “heir,” “bear,” and “memory” is an assonant sound.

How is assonance used?

Assonance is used to create rhythm in writing. It has a similar effect to rhyming, so you will often find it in poetry and song lyrics. It can also be used, in both poetry and prose, to create a mood or place emphasis on important words.

What’s the difference between assonance and alliteration?