Have a Grammar or Writing Question? Check out the April Q&A 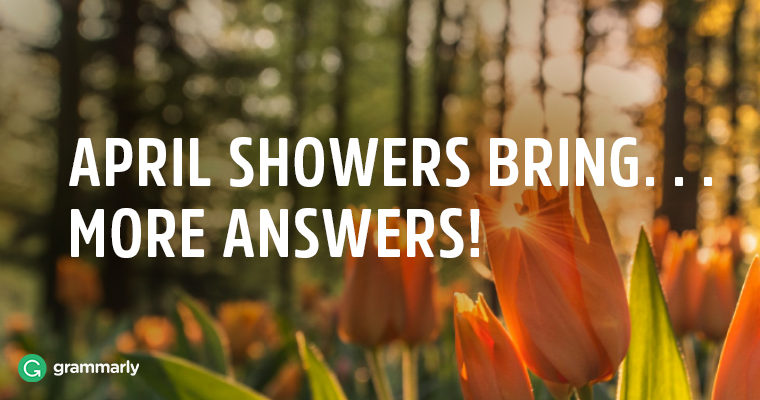 Happy April! Welcome to this month’s Grammarly Q&A. Read on for answers to readers’ questions about spelling, grammar, punctuation, and more. And don’t forget to check out last month’s Q&A!

I’m often puzzled about when to use “which” or “that.” Often I tend to go by what feels right. Do you have a more scientific approach to that issue? —Andrew

I play scrabble and notice new words become acceptable according to certain dictionaries. What are the conditions that make a word valid enough to be in a dictionary? —Shirley

The criteria vary slightly from dictionary to dictionary, but the two main conditions are frequency of use and longevity. Lexicographers look through vast amounts of written material to gauge how often people use a particular word. They also watch popular new words over time to see if they stick around or fade away. Eventually, when a word becomes ubiquitous enough, it gets added to the dictionary. You can read more about the process here.

Is the phrase “gone missing” correct? If a person disappears saying they are “gone” sounds like a choice. How can car keys “go” missing? —Gary

“Go missing” seems to have originated in British English, but has been adopted by many segments of American English speakers, especially when referencing a missing person, as you point out. It seems to have become a firmly established idiom, but the relative newness does still sit uneasily with some. Over time, that may fade—we use plenty of other “go” idioms without blinking (go crazy, go bankrupt), and it’s clear to everyone that the “go” doesn’t imply choice there.

This one is somewhat controversial. “Did not use to” is the older version by several hundred years. But “did not used to” is now more common, especially in American English, and is considered standard by some authorities. Whichever version you use may raise an eyebrow somewhere. If you want to avoid the controversy altogether, here’s the solution: We never used to go to the beach.

Why do I cringe every time somebody writes that they are “bored of” something? Is that just a fad? I always say “bored by” or “bored with.” “Bored of” seems too unspecific, but it’s certainly taking over the other two usages these days. —Jan

“Fad” may not be the right word, because it probably isn’t going to disappear anytime soon. Preposition usage does shift over time—people may say “bored of” because other phrases with similar meanings, such as “tired of,” use the preposition “of.” But for now, “bored by” and “bored with” are better choices. “Bored of” is nonstandard.

Why has the pronunciation of the word figure changed to “figger”? I have been hearing that on TV. —Miriel

It may be a regional pronunciation. Or, it may just be a casualism, not unlike the way people pronounce “going to” as “gonna” in speech. American dictionaries list “fi-gyər” as the standard American English pronunciation but point out that “figger” is also common. The latter, in fact, is standard in British English.

What is the proper punctuation when using parenthesis around a question (or the final words of a question.)? I’ve read that the period should always be inside the final parenthesis so is my first question punctuated correctly? —Lois

Beware of any punctuation rule that includes the word “always.” In the first sentence of your question, the period inside the closing parenthesis is actually unnecessary because the parenthetical statement is not a complete sentence. Here’s a handy guide to using question marks with parentheses.

In my everyday work I send many e-mails with attachments. Usually I add something like “Please find a … file is attached”. Recently I found that my pen friends use “… file attached” without “is”. I thought it is passive voice when something is attached. Please advise which approach is correct? I’m not a native speaker, so it’s hard for me to understand right one. Thank you in advance. —Ivan

The word “attached” can actually be a verb or an adjective. In your sentence, it’s an adjective, so you don’t need the “is.” “Please find the file attached” is the usual way to write that phrase. A similar type of sentence would be “Please leave the window closed.”

Which sentence is correct, “It is I” or “It is me”? I was taught to say “It is I,” but it sounds too stilted in everyday conversation. —Evelyn

“It is I” is correct, and as you accurately observed, it’s also stilted and stuffy. But, according to every major grammar authority, the idiomatic “It is me” (especially in the contracted form “it’s me”) is also fully acceptable. Feel free to say “it’s me” in everyday conversation. If you want to sound especially fancy or dramatic, go with “It is I.”

Thank you to everyone who submitted questions! Do you have a grammar conundrum? Submit it here for a chance to have it answered in our next Q&A. See you back here next month!

BasicsWhat Is a Writing Assistant?

Basics5 Clever Ways to Say “Nice to Meet You” in Writing

BasicsHere's How to Know the Difference Between Miss, Mrs., and Ms.

BasicsHow To Use "Sincerely Yours" in an Email
Writing, grammar, and communication tips for your inbox.
View Comments