Why Do We Call April 1 April Fools’ Day?

Shundalyn Allen
Updated on May 20, 2019Lifestyle 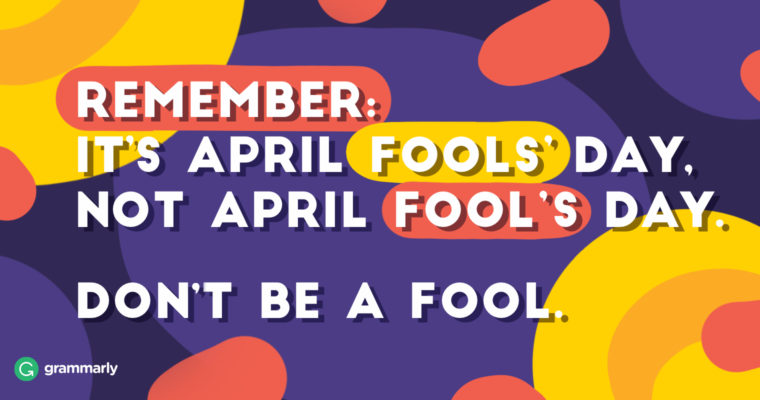 People around the world, and especially in North America and Europe, celebrate April 1 by playing practical jokes. But how did these customs evolve? And why on the first day of April?

It started with Constantine, a Roman emperor in the fourth century. The rulers of that period entertained themselves and their guests with “fools,” court jesters proficient in music, storytelling, acrobatics, or other skills. One day, a comedian joked that he would make a better king than Constantine. The emperor called his bluff and crowned the entertainer “king for a day.” The first thing the jester did was institute mandatory merry-making. Each year afterward on the anniversary of the jester’s kingship, the inhabitants of Rome remembered to have a little bit of fun with each other through jokes and pranks.

In 1983, the Associated Press printed this story. To research the origins of the day, they interviewed a Boston University professor with a keen sense of humor. They didn’t realize that the tale was pure nonsense. The history professor invented the story to fool them. The truth is, nobody knows for a certainty when and where April Fools’ Day originated.

Let’s take a moment to examine some facts we do know.

Something about springtime inspires lighthearted fun. Cultures around the world have festivals that appear to center on silliness. The ancient Romans held the Hilaria festivals for their god of vegetation. As part of a celebration called Holi, Hindus douse each other with colored powder. Jewish children dress in costumes, compete in beauty contests, and march in parades during their commemoration of Purim. Perhaps April Fools’ Day arose from an ancient spring festival or as an excuse to have a good time.

Not everyone observes April Fools’ Day in the same way. In the Western world, many pranks focus on tricking someone into believing something extraordinary. In 1998, Burger King advertised a new menu item in USA Today. The full-page ad introduced the Left-Handed Whopper. Burger King claimed that they designed the new sandwich by rotating the ingredients of the regular Whopper 180 degrees to accommodate lefties. The prank duped thousands of left- and right-handers who began ordering the sandwich corresponding to their dominant hand.

Other jokes are designed to cause mild trouble for the victim. For instance, Reader’s Digest published a list of seven practical jokes to play on coworkers who are lax about logging out of their Facebook accounts. The article included changing the colleague’s display language to one that doesn’t use the Roman alphabet (e.g., Japanese or Arabic) and accepting friend requests from strangers. Tricks like these provide a laugh as well as a life lesson.

France is particularly unique in the way they mark April 1. In French, the day is called Poisson d’Avril, or April Fish! Children spend the day trying to sneak a picture of a fish onto the back of their schoolmates. If the friend finds it, they yell, “Poisson d’Avril” in place of the “April Fool!” cry of people in the English-speaking world.

Another common ploy is to send someone on a “fool’s errand.” In other words, you ask him to search for an item that doesn’t exist or otherwise waste time trying to complete a useless task.

If you write the name of the occasion incorrectly, you might receive your fair share of ribbing. Do yourself a favor and mind your apostrophe. The official name of this holiday is April Fools’ Day. Fools is plural, so the apostrophe for possession appears after the last S. However, according to a search on Google Ngram Viewer, the singular variant is actually the most popular one. Some dictionaries acknowledge the variant, April Fool’s day.

I get that Easter falls on April fools, but this is just pure evil. pic.twitter.com/9qTMjCRwPA

April Fools’ Day is not an official public holiday in any country. Its popularity has grown since the nineteenth century, especially in the Western Hemisphere, but no one seems to want to grant it formal recognition.

With so many countries participating, it seems that setting a day aside for a few jokes and hoaxes is a worldwide trend. Whether it’s attaching paper fish to someone’s back or sending messengers on fool’s errands, every culture seems to have a different way of celebrating the event. Why is April 1 called April Fools’ Day? No one knows for sure, which means the door is wide open for you to make up a ridiculous origin story to tell your family and friends.