What Is Anthropomorphism in Writing? 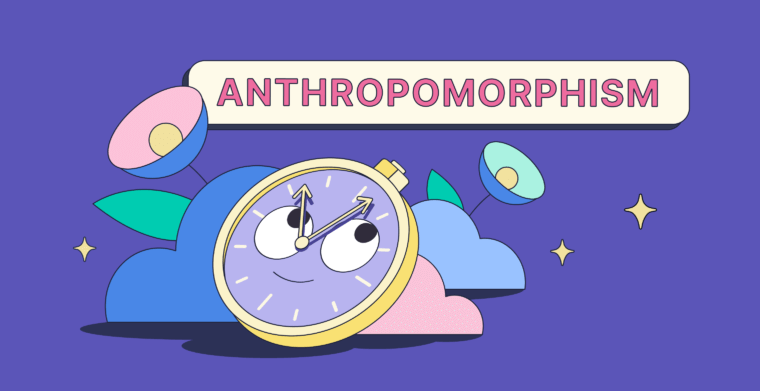 Have you ever stopped and thought about who Mr. Fox of Fantastic Mr. Fox really is? He’s a walking, talking, crafty red fox with harebrained schemes. If you’ve ever met a fox in real life, chances are it’s not as cunning and charismatic as Mr. Fox, doesn’t cooperate with other animals, and can’t speak a human language. Assigning these humanlike qualities to a fox is an example of anthropomorphism, a literary device that pops up all the time in storytelling.

Anthropomorphism (pronounced an-thruh-puh-MOR–fi-zm) is the attribution of human traits to nonhuman things. We anthropomorphize all the time whether we’re conscious of it or not. When you tell your computer to “hurry up,” you are anthropomorphizing it (as if it has intentionality and can be pleaded with).

It is slightly different from personification, which uses metaphorical language to impart human qualities onto objects, phenomena, or abstract concepts. For example, in Winnie-the-Pooh, Pooh Bear exhibits literal human qualities, like walking, talking, contemplating, and wearing clothes. If the author, A. A. Milne, described a wild wind howling through the Hundred Acre Woods, he’d be ascribing wildness to a natural phenomenon—personifying the wind, but not anthropomorphizing it. Both are useful literary devices that give your writing depth and character.

Anthropomorphism is so ubiquitous in literature—especially children’s literature—that we don’t even think twice about it. Of course Mr. Fox is a strategic fox; Winnie-the-Pooh is a timid, honey-colored bear; and Buzz Lightyear is a heroic talking toy. We don’t have to try hard to accept these qualities because anthropomorphism has roots in psychology. In other words, our brains naturally want to anthropomorphize.

What does anthropomorphic mean?

Anthropomorphic is the adjective used to describe something with human qualities. To return to the Mr. Fox example, Roald Dahl, the author of Fantastic Mr. Fox, uses anthropomorphism to generate the character. Mr. Fox himself is an anthropomorphic fox (Vulpes vulpes to be exact).

When is anthropomorphism used?

Anthropomorphism is all around us—in myths, movies, and everyday life.

Some of the earliest uses of anthropomorphism are in religion and mythology. Ancient cultures gave their deities humanlike qualities in order to understand them better. For example, the gods in Greek mythology eat, drink, love, dance, and make war the same way humans would, despite being more than human. Other early uses are traditional allegories that use anthropomorphic animals to teach moral lessons, like Aesop’s Fables.

Anthropomorphism doesn’t have to be complex. In fact, most of the time we use it in order to simplify. If you’ve ever been to an art museum where you felt you didn’t “get” the work, you could anthropomorphize to understand it. You might interpret the color red in a Rothko painting as aggressive or a streak of blue as wanting to provide the viewer solace. Giving things human characteristics helps us understand them.

Why do we anthropomorphize?

Anthropomorphism is much more than a clever literary trick, it has a major psychological function. Humans are a social species, so children generally learn quickly how to pick up social behaviors and understand social cues. This recognition of human behaviors is embedded in us early on. On the other hand, we do not pick up mechanics and nonhuman behaviors as easily. A child is much more likely to comprehend what a smile means before they understand how a bicycle works. As we grow up, we’re still naturally inclined to assign ambiguous things a human behavior before we understand how they work.

Anthropomorphism is one of many literary devices that our brains are capable of using to make sense of the world. We also turn to analogy and metaphor to explain the world around us. Engaging literary devices in your everyday thinking has the added benefit of creating a more poetic worldview.

George Orwell’s Animal Farm is a 1945 novella about a group of farm animals that rebel against their farmer, hoping to create a new society where the animals can be free and equal. The animal characters in the novel have all the capabilities of humans, like critical thought, greed, and the ability to hold meetings. Anthropomorphism was not only a clever way to tell this tale but also essential to Orwell’s safety. The novella is a thinly veiled allegory that exposed Orwell’s political stance. By using animals rather than people, Orwell could hide beneath the guise of its clearly fictional characters.

The Metamorphosis by Franz Kafka

The Metamorphosis is a straightforward example of anthropomorphism because the main character, Gregor Samsa, is a human who has transformed into a cockroach (or a “monstrous vermin,” as the original text puts it). As a cockroach, Gregor maintains his human thoughts and feelings, despite his appearance. The story follows Gregor and his family as they are all forced to adjust to his new form.

Beauty and the Beast

In the Disney classic Beauty and the Beast, not only is the Beast an anthropomorphized creature but the castle is filled with human characters cursed as animate objects. Lumiere the candelabra is rebellious, romantic, and French. Cogsworth is a loyal pendulum clock who can be a bit neurotic.

Alice in Wonderland, both the movie and the book, is replete with anthropomorphism. Animals (the White Rabbit, the Cheshire Cat, the Dodo), plants (daisies, pansies, tulips), and even a deck of cards (the Queen of Hearts) take on curious and whimsical human characteristics.

Brands use anthropomorphism to create fun and relatable mascots, like Cheetos’ Chester Cheetah and the Geico Gecko. Similarly, sports teams use mascots with human qualities and often send them into the stands or onto the field during halftime shows.

Anthropomorphism is the attribution of human characteristics to nonhuman objects. It shows up in storytelling, art, mythology, movies, and everyday life.

When is anthropomorphism used?

Anthropomorphism is used in literature and media to create a diverse cast of characters. Anthropomorphizing animals and other objects gives a writer freedom with their characterizations because they are not bound by the technical conventions that humans are.

Why do we anthropomorphize?

Anthropomorphism helps us make sense of the world. Early examples of anthropomorphism are found in religion and mythology because they helped humans understand gods and deities. Giving foreign or ambiguous concepts human qualities helps us relate to, and therefore understand, them better.

What are some examples of anthropomorphism?

Examples of anthropomorphism are Disney characters, like Mickey and Minnie Mouse or the candlestick, teapot, and clock in Beauty and the Beast; the animals in George Orwell’s novella Animal Farm; and brand mascots, like Cheetos’ Chester Cheetah.