What Is an Anecdote, and How Do You Write One? 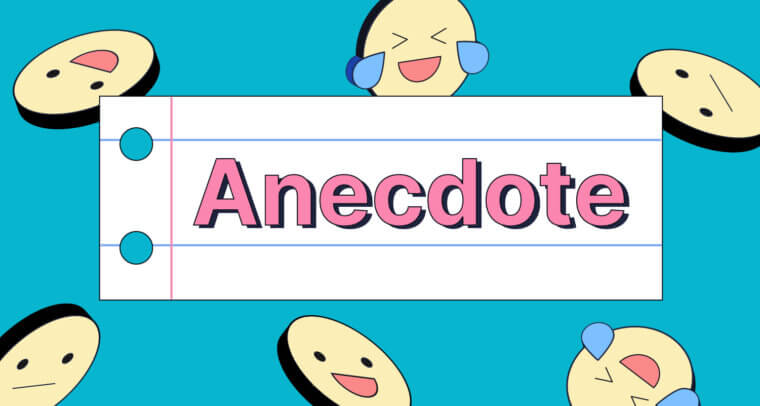 An anecdote is a quick story about something of interest, usually with a singular theme or lesson. Anecdotes are no different than the stories told among friends, but when they’re used in literature, they can accomplish more than merely passing the time.

Below we discuss what anecdotes are and how to use them. We’ll share some famous anecdote examples and explain how to write your own. But first, let’s begin with a definitive anecdote explanation.

What is an anecdote?

An anecdote is simply a story that’s short and self-contained. Most anecdotes revolve around a central theme or event without too much complexity. Anecdotes can be true or fictional (or somewhere in between when it comes to exaggeration), and their tone can range from serious warnings to lighthearted jokes. Unlike other narratives, most anecdotes tend to focus exclusively on a single character.

What is the purpose of anecdotes?

Anecdotes take on a deeper purpose when used as literary devices in both fiction and nonfiction writing. For example, some anecdotes describe a character in a way that wouldn’t fit the main narrative, giving the reader a better understanding of their background or motives. Anecdotes can also be used to slow the pacing or fill in gaps within the core storyline.

Good anecdotes take advantage of rhetoric, or the specific language used to tell them. A humorous anecdote might make use of slang or profanity to make it even funnier, while an inspirational anecdote might use sentimental language to tug at the heartstrings of the reader or listener. In this sense, anecdotes and rhetoric work hand in hand toward the same goal, depending on the type of anecdote it is.

The purpose of anecdotes depends on the type. While there are no formal categories, here are some of the most common types, along with some famous anecdotes for examples.

Because they’re quick and focused, anecdotes are a good medium for short stories that teach a lesson. These “cautionary tales” often involve characters with some flaw or poor judgment, resulting in punishment or negative consequences. As with historical myths, religious parables, and fairy tales, the idea is to encourage people to do the right thing by showing the potential harm if they don’t.

Many Greek myths, such as the tale of Icarus, are anecdotes with a lesson or moral.

In the tale of Icarus, the engineer Daedalus builds machine wings made of wax so that he and his son Icarus can escape prison. The plan works, although Daedalus warns Icarus not to fly too close to the sun or the wax will melt. Icarus is taken by the thrill of flying and ignores his father’s advice—his wings melt after he flies too high, and he falls into the ocean.

The moral of the story is not to let your ambitions exceed your capabilities. That’s why, even today, you hear people advise those with lofty goals not to “fly too close to the sun.”

Anecdotes are commonly used in literature to flesh out characters, showing sides of their personality or events from their past that aren’t part of the main narrative. This approach is also used in real life, often with celebrities and historical figures, to highlight certain virtues or attributes.

Most American schoolchildren know this anecdote about George Washington, the first US president.

As the story goes, when George Washington was a child he cut down a cherry tree without permission. When his father saw the fallen tree and asked who did it, George famously replied, “I cannot tell a lie” and confessed.

Although almost certainly not true, this story acts to emphasize Washington’s honesty. Anecdotes like this enforce certain ideals in individuals, in this case to accent the virtues of an important cultural figure.

Anecdotes originated as stories told in social situations to entertain each other. In this sense, jokes with involved narratives can be considered anecdotes. Humorous anecdotes can also be used as literary devices to lighten the mood after a dramatic plot point or otherwise give readers and audiences a small break from the main story.

In the Stephen King short story The Body, as well as its movie adaptation Stand by Me, a group of preteens goes on an adventure through the woods. One night while camping, the protagonist—a fledgling writer—tells the other boys an elaborate and fictional anecdote over the campfire to pass the time.

The anecdote, titled “The Revenge of Lard Ass Hogan,” is written in its entirety, making it a story within a story. Technically it’s unnecessary to the plot, but nonetheless it remains one of the most memorable parts of both the short story and the movie thanks to its humor.

In a 1965 magazine interview, Dr. Martin Luther King, Jr. was asked if he ever succumbed to the pressures of his position as a civil rights leader. He replied to the question with an inspirational anecdote:

I never will forget a moment in Birmingham when a white policeman accosted a little Negro girl, seven or eight years old, who was walking in a demonstration with her mother. “What do you want?” the policeman asked her gruffly, and the little girl looked him straight in the eye and answered, “Fee-dom.” She couldn’t even pronounce it, but she knew. It was beautiful! Many times when I have been in sorely trying situations, the memory of that little one has come into my mind, and has buoyed me.

This touching anecdote draws on childlike innocence to invoke an emotional response—not just in the reader but also in King himself, as he admits.

Reminiscent anecdotes are popular in essay writing, where the author relates true stories from their childhood or young years. Humorist and author David Sedaris often recounts his youth as a gay teenager in a conservative town, with different chapters of his books or complete essays consisting of independent anecdotes. In his short story “Let It Snow,” Sedaris recalls a time when his mother forced him and his siblings out of the house after school was canceled due to snow. They were only allowed back home after one of the children lay down in the path of traffic in an attempt to get their mother’s attention.

How to write an anecdote and when to use one

If you already know how to write a short story, writing an anecdote follows the same formula—just shorter. Let’s take a look at some of the specific aspects of writing anecdotes.

How to structure an anecdote

Typically, anecdotes are structured just like any other narrative, with a beginning, middle, and end. In the beginning, you introduce your characters and themes, in the middle you present the action or conflict of the story, and in the end you conclude the action and wrap everything up.

While anecdotes use the same structures as other stories, keep in mind that everything is much more succinct. By definition, anecdotes are quick and simple, so their structure usually involves a faster pace with fewer details.

What to include in an anecdote

Because they’re supposed to be short, anecdotes usually revolve around one central character, with little information given on secondary characters. Likewise, the plots are also simplified, usually focusing on only a single conflict or theme without getting too complicated.

As mentioned above, anecdotes mostly rely on rhetoric to set the right mood. Pay close attention to the language you use when writing your anecdote and make sure it fits the tone you’re going for.

The specifics to include in each anecdote depend on the type. For example, a humorous anecdote might include a punchline or funny twist at the end, whereas a cautionary anecdote would use a moral or lesson. Feel free to tackle multiple types in the same anecdote, such as a reminiscent anecdote that’s also inspiring—just make sure it doesn’t get too complex.

When to use an anecdote in your writing

Anecdotes are by no means necessary, so don’t feel you have to force one into your writing. That said, under certain circumstances, they can be the perfect tool to accomplish your goal.

Basically, anecdotes work best when you need to deviate from the main narrative. Sometimes writers need to say something that doesn’t directly fit into the main flow of ideas, such as secondary or supplemental information. However, because anecdotes are mostly tangential, be careful about using them to disclose crucial details.

Writers can also use anecdotes to temporarily pause the main narrative and give readers a small break. These anecdotes can separate sections of the writing with more fluidity, rather than using direct interruptions like a chapter break, and can naturally transition from one topic to another.

What is an anecdote?

An anecdote is a short, self-contained story that usually highlights one particular theme, lesson, or aspect of a person’s character. Anecdotes can be true or fictional and can exist independently or be embedded in a larger work.

What are the different kinds of anecdotes?

Although there is no formal grouping, anecdotes tend to fall into the categories of cautionary, characterizing, humorous, inspirational, and reminiscent. However, these are not mutually exclusive and can be blended together.

When should you use an anecdote in your writing?

In writing, anecdotes work best for tangential and secondary information that doesn’t fit into the main narrative or flow. In some cases, especially with humorous anecdotes, they can provide a quick break from the central action and can be good for transitioning or sectioning off parts naturally.