Ancient Words That Have Stood the Test of Time 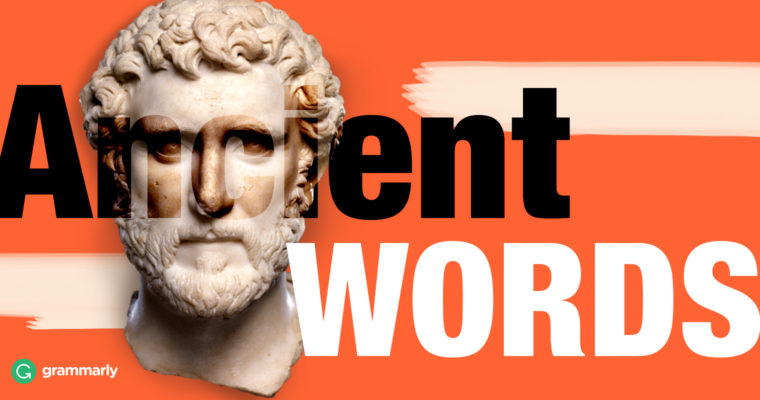 Antique words? Researchers from the University of Reading claim that at least twenty-three words found in modern English have survived almost completely unchanged for thousands of years. After taking a look at them, ask yourself why these words were so successful.

Many of the oldest words in English are pronouns. You probably use I, we, and

The oldest surviving nouns may conjure up images of cavemen. They are man (or male), mother, hand, fire, bark, and ashes. The only one that doesn’t seem to fit into a cave mural is worm. The ancient term referred to a broader class of small creature than the modern word. It included snakes, maggots, and even scorpions.

Is there really more happiness in giving than there is in receiving? Perhaps that’s the reason give tops the list of ancient verbs. Others include to hear, to pull, to flow, and to spit.

Studying these adjectives might give you insight into your ancient ancestors. One of the oldest adjectives describes a color: black. Ironically, old is also an extremely ancient word. This and that have also been used as adjectives for a very long time.

Not and what are adverbs. Adverbs modify verbs, clauses, adjectives, and other adverbs. Adverbs are the least represented category of the ancient words. Their lack of representation may indicate that adverb use became more sophisticated over time. In modern English, you can make adverbs of most adjectives by adding -ly to the end.

According to USA Today, there are about 700 languages spoken “from the British Isles to western China and from the Arctic to southern India.” It’s amazing that many of these twenty-three words have cognates in numerous languages from different language families. The University of Reading research team identified these words as “ultraconserved” because their meaning and sound remained nearly unchanged for thousands of years. A BBC News article sheds some light on why these words have stuck around so long: “The frequency with which a word is used relates to how slowly it changes through time, so that the most common words tend to be the oldest ones.” In other words, if speakers of a certain language use a word a lot, they tend to spell, pronounce, and define it the same way. If they rarely use a word, the way they use it might not follow such a strict pattern.

The ancestor languages of modern day Indo-European languages might have used the same words that you use today. These words are successful because they were so useful that ancient people used them frequently. Today, you have something in common with people who lived thousands of years ago. You pronounce and use these words nearly the same way. It’s no antique vase, but it is something pretty cool!