What is an Anagram in Literature? Definition and Examples 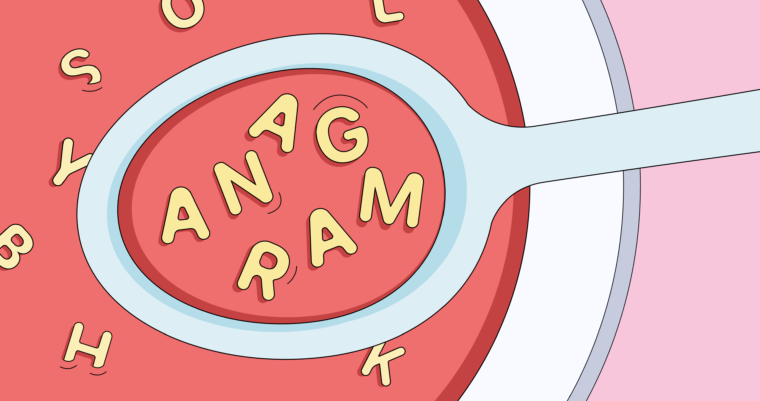 Scrabble, Wordle, Spelling Bee—if you’ve played any of these games, then you’re already familiar with anagrams. An anagram is a literary device where the letters that make up a word, phrase, or name are rearranged to create new ones. The original word or phrase is the subject of the anagram, the anagram is what is created by repurposing those letters.

What is an anagram?

Anagrams are a form of wordplay in which the letters of a word or phrase are rearranged to create a new word or phrase. For example, if you take the letters from the words “a gentleman,” you can rearrange them to spell “elegant man.” By rearranging “Clint Eastwood,” you can spell “old west action.” “William Shakespeare” can be rearranged to spell “I’ll make a wise phrase.” Anagrams are used in writing for a variety of purposes, including to provide humor, embed mystery, and create a new identity.

How do anagrams work?

Anagrams are conceptually straightforward. There are only two rules to determine if something is an anagram: The new arrangement must spell something comprehensible (otherwise it’s just gibberish), and all of the letters from the original text must be used in the new one.

Despite their simple construction, anagrams can generate a wide array of effects on a reader.

They can be used for comedy:

To rephrase the obvious:

And to embed mystery:

Are there different types of anagrams?

We can broadly categorize anagrams by their intended function:

Commentary: A satirical or critical take on the subject of the anagram.

Example: The American fast-food giant McDonald’s→Digest a ton of fat and random chemicals

Synonyms: A new word with a similar meaning. These are called “synanagrams,” which is an incredibly fun word to say.

Antonyms: Arrangements that mean the opposite of their subject. These are called “antigrams,” and they’re often created with a hint of sarcasm.

Full phrases: Anagrams that rearrange the first half of the phrase to create a complete sentence.

Example: For the evil that men do→doth live on after them

Names: Sometimes an author or artist rearranges the letters in their own name to create a pseudonym. “Mr. Mojo Risin” is a famous anagram of “Jim Morrison.”

Is it similar to any other literary devices?

There are other literary devices that use letters but differ from anagrams, such as these:

Acronym: An acronym is formed by using the first initial of a set of words to create a new word. NASA is an acronym for the National Aeronautics and Space Administration (while “moon starer” is an anagram of “astronomer”).

Palindrome: A palindrome is a word that can be read forward or backward and spells the same thing. “Step on no pets” spelled backward is “step on no pets.” It’s a new look at the same word or words, but in the case of palindromes, there’s no scrambling involved.

When would a writer use an anagram?

One way a writer can use anagrams is to tuck themselves into their own stories. Vladimir Nabokov famously injected himself into his novel Lolita as the anagrammatic Vivian Darkbloom. Other times, authors use anagrams to remove themselves entirely from a work by creating a pseudonym (or a “pen name”) generated by an anagram. Edward Gorey, for example, published as Ogdred Weary, Dogear Wryde, and Ms. Regera Dowdy, all clever rearrangements of his own name.

In literature, anagrams tap into a reader’s sense of surprise by presenting what is already in front of them in a new way. This sense of discovery can be useful for writers trying to embed a mystery or solve a riddle.

Examples of anagrams in literature

In The Da Vinci Code by Dan Brown, the main character decodes a series of anagrams (written in the blood of a murdered curator, because it’s a thriller) to discover the next clues:

“So dark the con of Man”→Madonna of the Rocks

In the Harry Potter series, it’s revealed that the name “Tom Marvolo Riddle,” a character trapped in a mysterious limbo, is an anagram of the phrase “I am Lord Voldemort.” Unless they are especially astute with anagrams, most readers reach the revelation at the same time as Harry, creating an experience of satisfaction and disbelief: It was right in front of you all along.

Not all anagrams are riddles to be solved. Writers also use anagrams as allusion, like in Shakespeare’s Hamlet, where the titular character’s name is an anagram of Amleth, the historical Danish prince whose legend the play is based on.

How do you create an anagram?

There isn’t a singular “way” to write an anagram, any more than there’s one single way to write. But like with writing, there are strategies that will help you get started.

Break the word up. It’s hard for our brains to rearrange something that’s already cohesive, so pick the letters apart and lay them out differently. Some people lay the letters out in a circle so they can rotate the paper and notice new combinations.

Create groups. Arrange the letters into known groups. You can create columns to separate vowels from consonants, or group together letters in common pairings. “QU” is a quick one, and the letter “H” is frequently found with “P,” “T,” “S,” “W,” and “G.”

Look for prefixes and suffixes. Cordoning off common prefixes like “un-,” “sub-,” and “re-” will leave you fewer letters to have to arrange.

And finally, start small! Anagrams are a good way to exercise creativity, expand your vocabulary, and warm your brain up for a writing exercise.

Creating an anagram is like thrift shopping, you can only use what’s already available. And just like with thrifting, a little bit of time and cleverness will yield some surprising results.

How do anagrams work?

What is an anagram in literature?

In literature, anagrams are commonly used to convey humor, sarcasm, or mystery. Authors also use anagrams of their own names to create pseudonyms and new characters.

What’s the purpose of an anagram in literature?

Anagrams are a fun literary device because they tap into a reader’s sense of surprise by presenting available information in a new way.