Why You Should Take a Vacation, Even If You’re Busy 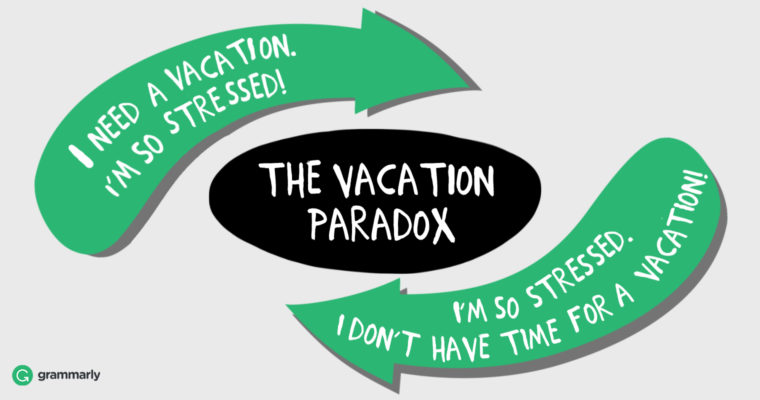 “I hate vacation,” said no one ever. So why are we so bad at taking time off? North Americans in particular are notorious for rarely taking time off work. A study by Expedia found that each year workers in the U.S., Canada, and Mexico take twelve, fifteen, and twelve days off respectively, while Europeans take between twenty and thirty days off.

Granted, employers in North America tend to offer significantly less vacation time than European ones, but workers often don’t even take all the time they’re entitled to, and that’s bad. Reasons vary—we’re too busy, we feel guilty, our bosses make it hard—but the truth is that you’re not doing yourself (or your employer) any favors by skipping vacations. Read on to find out why you need to step away from the office and relax for a little while.

Skipping Vacation Is Bad for Your Health

Taking a vacation, on the other hand, can reduce stress and associated symptoms like sleeplessness, fatigue, and headaches. But—and this is an important but—a poorly planned vacation can leave you more stressed than you started. Plan thoroughly. Make sure you request the time off well in advance of your trip. And don’t forget to warn your colleagues that you’ll be out! They’ll appreciate the heads up, as long as you don’t brag too much.

Four in ten American workers say that even though their employer supports time off, they’re just too busy to take it. The irony, of course, is that taking a vacation actually makes you more productive. As much as we like to pretend otherwise, mental resources are finite. Once in a while, you have to step away and replenish those resources if you want to continue doing great work. According to the New York Times, an internal study by the accounting firm Ernst & Young found that “for each additional 10 hours of vacation employees took, their year-end performance ratings from supervisors (on a scale of one to five) improved by 8 percent.”

So don’t feel guilty about taking your hard-earned vacation days. Your performance will be better, not worse.

Vacations Are Good for Your Personal Life

Traveling opens you up to new cultures and perspectives. Even if you’re staying local, relaxing with a good book can be its own kind of new experience.

But time off is also important for keeping your relationships healthy. According to one survey, 43 percent of American workers dedicate less than twenty hours a week to family time. But the majority of the households surveyed who plan out their time off are happier than those who don’t. Even if you can’t take everybody on an extravagant adventure in a faraway land, there’s probably plenty to do close to home. What about a family bike ride? Why not explore that odd little museum downtown that’s only open on Wednesdays at 10 a.m.? In the end, it’s the together time that counts.

Do you take as much time off as you’d like to? Tell us about your favorite ways to relax and recharge in the comment section below.

ProfessionalsHow to Write a Memo in 8 Steps

ProfessionalsHow to Write Meeting Minutes, with Examples
Writing, grammar, and communication tips for your inbox.