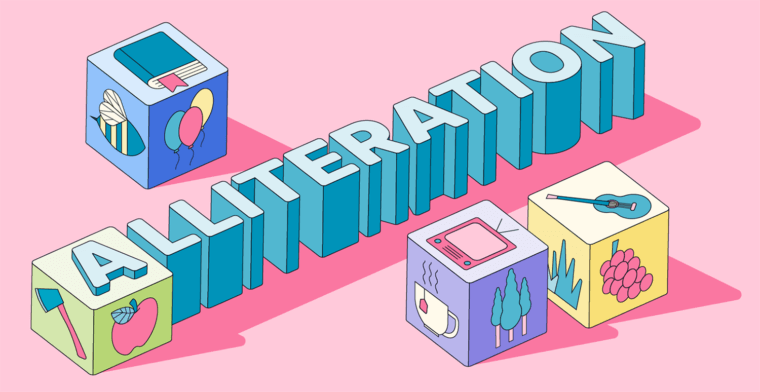 Why do these names stick in our minds and immediately conjure up images of their logos? Because they use alliteration, a popular literary device that repeats consonant sounds in two or more nearby words. Alliteration gives phrases and sentences rhythm, which makes it a popular device for poets, speech writers, and playwrights.

Write with confidence
Grammarly helps you hone your word choice

Alliteration is about repetition of sound, not simply of letters written on the page. That’s why “Sol sells cell phones,” which repeats the “ess” sound, is alliteration, but “Sol charges cell phones” isn’t. This repetition is what makes alliteration so popular in poetry, storytelling, speeches, and business names—when we hear alliteration spoken aloud, the rhythm it creates gives the words a poetic, even musical feel.

As a literary device, alliteration operates similarly to onomatopoeia in that the effect is heard, rather than read—even if the reader only “hears” it in their mind as they read silently. This is also why phrases made up of words that start with the same letter aren’t automatically alliterated. For example, “cat cells” isn’t alliteration because in these two words, the letter “c” is pronounced differently.

When and how is alliteration used?

You’ll read and hear alliteration used in all different kinds of writing and speech. As we mentioned above, it’s very popular for brand names because the repetition can make names more memorable.

In speeches and poetry, alliteration is often used to emphasize key terms and phrases. Take a look at how President John F. Kennedy used alliteration to communicate his humanitarian goals in his inaugural address:

“To those people in the huts and villages of half the globe struggling to break the bonds of mass misery, we pledge our best efforts to help them help themselves . . .

And how Edgar Allan Poe used alliteration to create a distinct mood in “The Raven”:

“Deep into that darkness peering, long I stood there wondering, fearing,

Doubting, dreaming dreams no mortal ever dared to dream before;

But the silence was unbroken, and the stillness gave no token,

And the only word there spoken was the whispered word, “Lenore?”

Alliteration is everywhere. Once you recognize it, it’s hard not to take note of it—there are many instances of it in popular culture, literature, and even everyday speech. Take a look at these well-known examples of alliterative names and phrases:

Alliteration in poetry and song

Sometimes, you’ll even see names and phrases where one (or more) of the words is spelled with a letter other than the letter it typically starts with in order to emphasize the alliteration at play. For example, Krispy Kreme.

What’s the difference between alliteration, consonance, and assonance?

So is this blog post’s title—All About Alliteration—an example of alliteration?

Assonance is the repetition of vowel sounds anywhere within nearby words:

See how in a few of these examples, the repeated vowel sound isn’t necessarily at the beginning of each word? When you do this with a consonant sound, it’s known as consonance. Alliteration is a specific type of consonance. Here are a few examples of non-alliteration consonance:

What is symmetrical alliteration?

Alliteration is fun! When you want to inject some whimsy into your writing, do it with alliteration.

When you’re writing poetry, music, short fiction, and other kinds of work that aren’t professional or academic, you have room to play with language and break established grammar rules. But that doesn’t mean you should completely ignore grammar rules . . . or that readers won’t notice grammatical mistakes in your work. Make sure you’re putting your best work out there by using Grammarly to help you edit your work. Grammarly helps with more than just grammar; our writing suggestions pick up misspellings, syntax issues, awkward phrasing, and shifts in your tone that can potentially undermine your message. Grammarly also offers feedback on how to improve.