What Is an Allegory? Definition and Examples 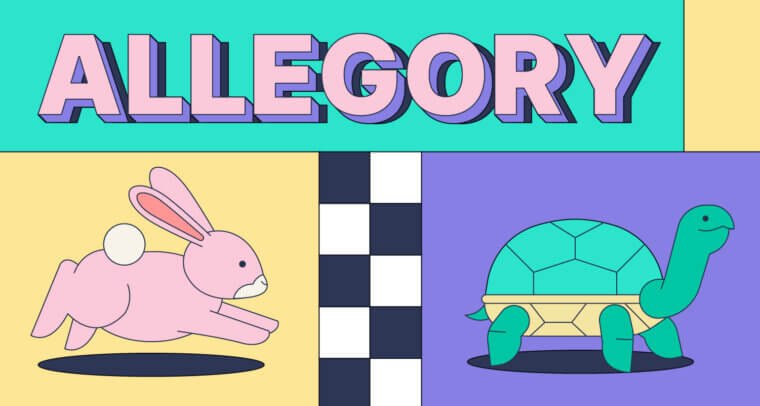 I’m going to tell you a story. There once was a tortoise and a hare; each went about their lives at their own pace. One day the tortoise, tired of being ridiculed by the hare, challenged the hare to a race. Do you know where this story is heading? You’ve probably heard Aesop’s The Tortoise and the Hare before, even if you’re not really interested in the relative foot speeds of woodland creatures.

This is an allegory, a story with an underlying message. In this case, the story is about an anthropomorphized tortoise and hare having a race. The message it conveys is determination and consistency triumph over arrogance. Allegory allows writers to express complicated matters in an approachable way.

What is an allegory?

An allegory is a narrative story that conveys a complex, abstract, or difficult message. It achieves this through storytelling. Rather than having to explain the pitfalls of arrogance and the virtues of persistence, a writer can instead tell a tale about a talking tortoise and a haughty hare.

Humans naturally gravitate toward good stories. Have you ever noticed how fiction gets the most shelf space in the bookstore? Stories are compelling. By using a story to talk about big, abstract, or difficult ideas, allegory takes advantage of our inclination toward story.

Sometimes, the message a writer wants to convey is dangerous to talk about explicitly. In these cases, allegory creates distance between the writer and the message. One famous example of this is George Orwell’s 1945 novel Animal Farm. Orwell used a story line about farm animals to express his dissent toward the Russian government, a risky subject to discuss outright.

Allegory as a literary device

Allegories are one of many literary devices that writers can use to show one thing and say another. In this way, they are similar to but not the same as:

Metaphors: The length of a piece of writing is the easiest way to tell if you’re reading allegory vs. metaphor. A metaphor is a brief literary device that assigns one thing to another. An allegory is an entire story, complete with characters and narrative arc.

Symbols: Like metaphor, symbols are typically singular. One thing represents a concept or idea. Technically, an allegory is an expanded work of symbolism and employs various symbols throughout its story.

Allusions: Allusion is a reference to a well-known person, character, place, or event that the writer uses to pack a lot of meaning into a small space. If an allegory is widely known, it might be referenced as an allusion in a piece of writing.

Fables: The term fable is often used as a synonym for allegory. The two terms overlap, but they’re not completely interchangeable. Allegory is the broader of the two terms. It encompasses fables, which are short-form allegories that use animals or nonhuman characters to teach a specific lesson.

Anecdotes: Similar to allegory, anecdotes have a complete narrative structure. They are short stories told to make a point. The difference is that anecdotes are true stories used to exemplify a specific message, whereas allegories are mostly fictional tales that convey broader meanings.

When are allegories used in writing?

Allegory gives the writer a chance to be creative while conveying an important message. It isn’t speech writing, and it isn’t science class. With allegory, you can employ personification, time travel, even magic if that suits your story. You have space to create more complex characters using techniques like indirect characterization. The important thing is that the story stands on its own and the underlying message is clear.

Effective allegory does not require explanation. Though sometimes, like with The Tortoise and the Hare, the story begs for a schoolteacher’s voice to enter at the end and say: “The moral of the story is . . . ” Yet even without a schoolteacher chiming in, we still understand the point of the story.

Allegory is most commonly sorted by the tradition it emerges from: biblical, classical, or modern. Sometimes you’ll see it divided by the literary device it employs, such as personification allegory or symbolic allegory.

Biblical: Biblical allegory can refer to stories within the Bible that teach specific lessons or to literature that retells lessons from the Bible. These usually appear as tales of good vs. evil.

Classical: Classical allegories are stories that emerged from the classical period of ancient Greece and Rome. Many of these allegories, such as Aesop’s Fables, originated as oral stories that were later transcribed.

Modern: Allegory is a powerful way to hold a reader’s attention, and it continues to be employed by writers to address modern concerns. Nathaniel Hawthorne’s The Scarlet Letter, from 1850, is an allegory about self-reliance and the threat of American conformity. Some scholars have read L. Frank Baum’s The Wonderful Wizard of Oz, first published in 1900, as an allegory about the social and political concerns of Americans at the turn of the twentieth century.

Symbolic: In symbolic allegory, the characters have an autonomous narrative outside of the messages they convey. The character Virgil in Dante’s Divine Comedy, from 1320, is a symbolic allegorical figure because he represents both the historical author of the Aeneid and the human faculty of reason.

Allegories heavily rely on symbolism to embed an underlying meaning. But again, allegory is not a symbol. It’s a story that stitches many symbols together to point at a deeper or more complex message.

For example, think about a flag. A flag is a symbol of a country. Flying a flag in one’s yard is a way to demonstrate pride in that country through the use of a symbol.

A more complex message might discuss the way that national pride is a positive quality insofar as it unifies people around certain ideals but also how a threshold exists beyond which national pride can become dangerous and exclusionary. This message is much more nuanced and requires more elements than a front yard and a flagpole. This message could form the foundation of an allegory.

Allegory is found in many different art forms, but we’ll focus on examples of famous allegories in literature and philosophy.

One of the most famous examples of allegory is Animal Farm, by George Orwell. On its surface, Animal Farm is a story about farm animals that rebel against their farmer. The underlying story, however, concerns Orwell’s disillusionment with the Bolshevik Revolution and is an indictment of the Russian government.

Aesop’s Fables is a collection of short stories that use animal characters to teach children lessons about how to behave in society. Some of Aesop’s most famous fables are The Fox and the Hedgehog, The Goose that Laid the Golden Eggs, and of course, The Tortoise and the Hare. Each story is an individual allegory.

Philosophy often explores complex, abstract ideas, so it is rife with examples of allegory. Plato’s The Allegory of the Cave is an example of classical allegory. Plato’s allegory tells a story about a group of people who spend their lives in a cave, generating their understanding of the outside world based on the shadows they see on the cave’s walls. The underlying message is about the limits of human understanding.

Sometimes modern works of fiction are read as allegory whether or not that was intended by the author. J. R. R. Tolkien’s The Lord of the Rings, published in 1954–1955, has been read by scholars as both a biblical allegory exploring themes of good and evil and as a modern allegory commenting on World War I. Tolkien denies both interpretations, however. The reading of a text as allegory, regardless of its intention, is called “allegoresis.”

S. Lewis’s series The Chronicles of Narnia, from 1950 to 1956, has also often been cited as a work of biblical allegory, with Aslan representing a Christ character. That said, Lewis has rejected this classification on technical grounds. While he does acknowledge the biblical symbolism in the story, he does not think that it maps neatly enough onto the Bible to consider it a full-blown allegory.

What is an allegory?

An allegory is a narrative story used to convey an abstract, complex, or dangerous message.

How does an allegory work?

Allegory works by giving characters and events in the story symbolic meanings. As readers, our attention remains on the surface story while a symbolic story plays out beneath.

What are the different kinds of allegories?

Writing TipsHow to Write a Press Release: A Step-by-Step Guide