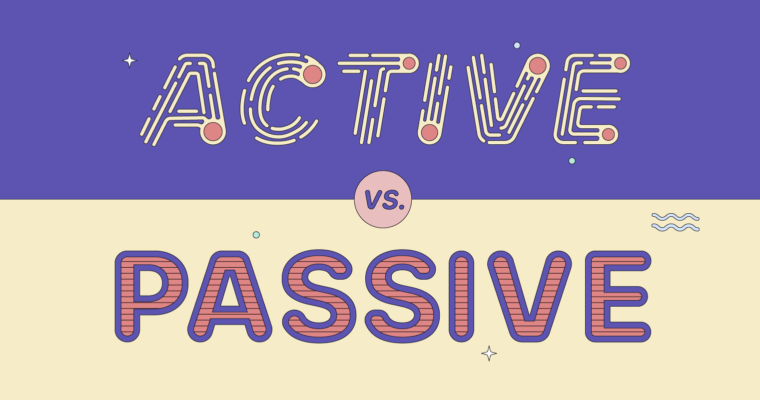 Take a sentence like “I want ice cream now.” It’s clear and straightforward—you know immediately that the subject, I, wants an object, ice cream. Now, recast this sentence, flipping it so that the object is in the position of the subject: “Ice cream is wanted by me now.” It isn’t just longer, but it’s also more detached, roundabout, and a little awkward, too.

What is active voice, what is passive voice, and what are their different functions?

In the active voice, the subject is performing an action:

The dog chases the ball.

Notice how the subject, dog, is performing the action, chase, on the target of the action, ball. This is a simple, direct example of the active voice.

In the passive voice, the action’s target, ball, is positioned first as the focus of the sentence. The sentence gets flipped, and the subject is now being acted upon by the verb. In other words, the subject is passive:

The ball is being chased by the dog.

Active and passive are the two grammatical voices in English. Neither is inherently better than the other, but each is suited to certain types of writing. There’s a reason why news anchors sound detached from the stories they’re reporting: They often speak using the passive voice. There’s also a reason why the authors of opinion pieces sound so sure of their positions: They usually write in the active voice.

No matter what verb you use, structuring your sentence so the subject performs the verb is writing in the active voice.

The active voice has a direct, clear tone. Use it when you want the reader to focus on the subject of your sentence and the action it is doing rather than on the action’s target.

Take a look at the previous examples, now written in passive voice:

Birdwatching is liked by Shira.

Twilight is loved by her.

Summer break is [conjugated form of “to be”] loved [past participle of the main verb] by [preposition] my friends.

However, sentences written in the passive voice don’t necessarily need a preposition. Take a look at the example sentences below:

The check was paid.

He will be remembered.

The Philippines is known for its marine biodiversity.

Although you may have been told that writing in the passive voice is “bad writing,” it’s actually more nuanced than that. For most of the writing you do, like emails, blog posts, and many kinds of essays, the active voice is a more effective way to communicate the ideas, themes, and facts you’re expressing.

In certain kinds of writing, though, the passive voice is necessary. Think about how news reports about crime and incidents are usually written and delivered:

A car was broken into on Elm Street last night.

Cash was stolen from the register.

In these kinds of reports, the passive voice is used to emphasize the action that occurred rather than the individual or group who committed the action, often because the perpetrator isn’t known or hasn’t yet been found guilty of the offense.

There are other kinds of writing where the action itself, rather than the doer of the action, is the primary focus. These include scientific and, in some cases, historical reports. These use the passive voice to keep the reader’s focus on what has happened or is happening. Here are a few examples:

The rats were placed into the maze.

The governor was inaugurated at the statehouse.

Notice how in both of these sentences, the doer of the action isn’t mentioned. That’s because it’s either implied or irrelevant. In the first example, the scientist performing the experiment is the one who placed the rats in the maze. In the second, those conducting the inauguration ceremony aren’t relevant to what’s being expressed in the sentence.

How to change passive voice to active voice

After you finish your first draft, read it. You might even want to read it aloud and listen to how it sounds. By reading and listening to your own work, you can catch awkward sentences and unclear phrasing and mark them as points to revise in your next draft. You’ll also hear where you used the active and passive voices and how they shift your work’s tone as a whole.

Let’s say you’ve detected a few instances of the passive voice in your argumentative essay:

More flexible scheduling options are deserved by students. Significant amounts of tuition are paid to the university every year, and many feel the level of service being paid for by students is not being received.

See how these sentences feel like they’re dancing around the topic at hand rather than addressing it head-on? The writer isn’t making a particularly persuasive argument, but they can make their writing far more impactful by changing it to the active voice.

See how this version gets right to the point? It makes the writer sound more confident too, which is a priority in argumentative writing. Let’s try changing the second sentence to the active voice, which also allows us to condense:

Students pay a significant amount of tuition to the university every year, and many feel they aren’t receiving the level of service they’re paying for.

As you can see from the compound sentence above, you can write any kind of sentence in the active or passive voice as long as the sentence has a transitive verb. Whether it’s a simple or complex sentence (or even a compound-complex sentence), you can dramatically alter your tone by simply reworking its structure.

If you aren’t sure whether a sentence is active or passive based on how it sounds, use the rules we outlined above to identify the two voices in your work. The biggest clue you have a passive voice sentence on your hands will be a form of “to be” followed by a past participle (e.g., was requested or will be missed). Not every passive voice sentence says who is performing the action, but if it does, you’ll see a preposition next to it (e.g., by zombies or by my brother).

Take a look at these examples of both the active and passive voices in action:

Active: Is Ajani visiting us today?

Passive: Will we be visited by Ajani today?

As you see, questions can be written in either voice. Other kinds of sentences, like exclamatory and imperative sentences, are often best written in the active voice:

Active: Please remove your shoes before entering my house.

Passive: Shoes should be removed before entering my house.

Passive: Let the door be locked!

Now take a look at these two examples:

Active: I poured the solution into the beaker and heated it to 100℉.

Passive: The solution was poured into the beaker and heated to 100℉.

What is active voice, what is passive voice, and what’s the difference?

In the active voice, the sentence’s subject performs the action on the action’s target. In the passive voice, the target of the action is the main focus, and the verb acts upon the subject. There are numerous differences between the two grammatical voices, but the most important is that the active voice is clearer and more direct, while the passive voice is subtler and can feel more detached.

When should you use active vs. passive voice?

Use the active voice in any sentence that focuses on the doer of the action. Unless the majority of your writing is scientific or reporting incidents involving unknown perpetrators, most of the sentences you write should be in the active voice.

The passive voice is meant for sentences where you need to emphasize the target of an action or the action itself rather than who or what is performing the verb.

How do you change passive voice to active?

Here’s a tip: You don’t have to guess whether you’re using certain words correctly or breaking
grammar rules in your writing. Just copy and paste your writing into our Grammar Checker and get instant feedback on whether your sentences have misspellings, punctuation errors, or any structural mistakes.
Your writing, at its best.
Works on all your favorite websites