What Is an Acronym? Definition and Examples 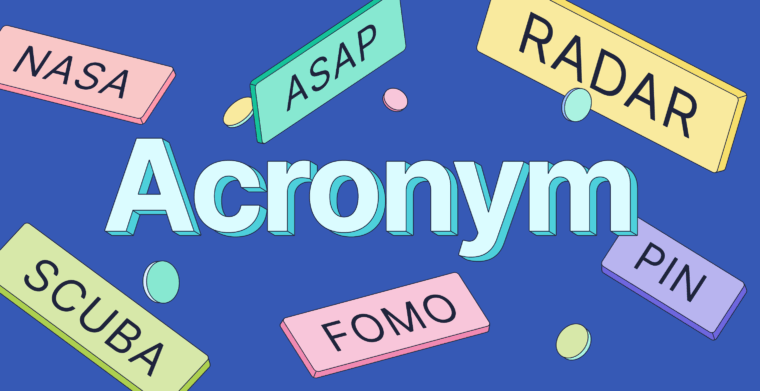 We use abbreviations every day—in writing, texting, note-taking, and talking. There are a few different categories of abbreviations, and acronyms is one of them. When you shorten a phrase by using just the first letter of each word and then pronounce it as a new word, you’re using an acronym.

What is an acronym?

An acronym is a word created by combining the first letter or syllable of each word in a phrase to create a new, single word. Here are a few examples of popular acronyms:

Some acronyms are a bit of both: They contain first letters and first syllables from the words in a phrase to create a new word. Radar is an example of this; it’s derived from the phrase “radio detection and ranging.”

When are acronyms used?

Acronyms are used to make communication more concise. Generally, acronyms are used in casual verbal communication. For example, you might say to your friend, “I’m not feeling great, but I think I’ll go out tonight anyway because of fomo.” FOMO is an acronym of “fear of missing out”—the sense that if you don’t take a certain action, you’ll regret it later. It’s uncommon to use abbreviations in more formal spoken conversations, but formal written conversations are a different story.

In emails and other business communication, acronyms are frequently used to keep the message brief. For example, you might send an email to a client that says, “just log into the wysiwyg editor and make any changes you’d like.” WYSIWYG is an acronym for “what you see is what you get,” and it refers to editor interfaces that show how a finished project will look as the user makes changes. It’s pronounced “whizzy-wig.”

Acronyms often arise from slang and shorthand. Today, many of the acronyms and initialisms we use in spoken and written communication have their roots in internet slang. A few popular texting abbreviations that have made their way into other forms of communication as initialisms include lol for “laugh out loud” and idk for “I don’t know.”

Sometimes, acronyms are used as brand names. For example, FedEx is an acronym for Federal Express. This extends to governmental organizations like NASA (National Aeronautics and Space Administration), OPEC (Organization of the Petroleum Exporting Countries), and BRICS (Brazil, Russia, India, China, South Africa; this acronym refers to the five leading emerging economies).

Acronym vs. initialism vs. abbreviation

An initialism, also known as an alphabetism, is similar to an acronym in that it’s also a new word created from the first letter of each word in a phrase. But with an initialism, the speaker says each letter individually rather than pronounces them together phonetically. Take a look at these initialisms to see what we mean:

See? You wouldn’t pronounce “ATM” as “attem.” If it was an acronym, you would. In contrast, “BFF” is an initialism because it’s pronounced “bee-eff-eff” and not “bffff.”

Notice how the abbreviation ft. can be used for either “feet” or “featuring.” Some abbreviations can stand for more than one thing. To determine what an abbreviation means in a given situation, you might need to rely on context clues and/or do a quick internet search. In the case of ft., it’s typically followed by a period when it’s used to mean “featuring.”

Certain abbreviations can be written in more than one way. One example of this is the shortened version of “continued.” It can be written as cont. or cont’d, and the correct version depends on the context and applicable style guide.

Backronym is a portmanteau of the words back and acronym. A backronym is a phrase created from the letters in a word, often for humorous effect. One of the best-known backronyms in English is “together everyone achieves more” from the word team.

What is an acronym?

An acronym is a word created by combining the first letter or syllable of each word in a phrase to create a new, single word.

When are acronyms used?

Acronyms are used in both text and verbal communication to save time. Often, they’re used to replace lengthy titles or to save space when there is a character limit, like in a social media ad or outdoor signage.

What’s the difference between an acronym, an initialism, and an abbreviation?

An acronym is a specific type of abbreviation that forms a pronounceable word from the first letter or syllable of each word in a phrase. For example, the word LASIK is an acronym for laser-assisted in situ keratomileusis.

An initialism is an abbreviation that uses the first word of each letter in a phrase, but instead of creating a new word, each letter is stated individually. IT, KO, and IPO are all initialisms.