A Lot vs. Alot vs. Allot 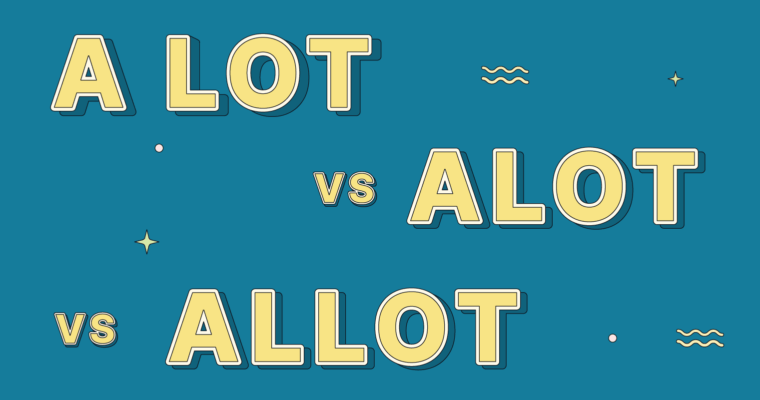 The English language is teeming with idiosyncrasies that can cause confusion, including differentiating between a lot, alot, and allot. Though these words all sound the same, a lot and allot mean totally different things.

We’ll make sense of the proper uses of a lot and allot below, but to be clear, alot is a misspelling. A lot should always include a space between the indefinite article a and the noun lot.

To better understand how these words function differently, as well as how they should be used in writing, let’s investigate the best use of each one.

What does a lot mean?

The definition of a lot is “a large quantity of something” or “very much.” Having not one, not two, but a lot of apples in your grocery basket will evoke a picture of an abundance of fruit, such as 10 or 20 apples.

The phrase a lot can be used as two different parts of speech. As an adverb, a lot often means “frequently” or “by a great degree,” like in this sentence: She plays basketball a lot with her friends in the summer. As a pronoun (or part of a noun phrase), a lot usually means “a large amount”—for example, It takes a lot of time to learn a new language.

Again, it’s common to see the phrase misspelled as alot, especially in informal communications like text messages or emails, but this is considered a mistake. The stand-alone “a” in a lot serves its own purpose as an indefinite article, just like in this sentence: I read a dozen books over fall break.

A lot also has a plural form that drops the indefinite article entirely: lots. Known to grammar experts as a quantifier, lots tends to be used in informal speech or writing, such as in this sentence: Lots of people enjoy going out to dinner.

Synonyms of a lot

Some common synonyms of a lot, which are all variations of “a large quantity,” include these:

What does allot mean?

The definition of allot is “to apportion by shares” or “to set aside for a specific purpose.” If you’ve ever had a jar for spare change that you intended to use toward a special treat, this is an example of allotting money with a specific intention in mind.

To allot means to deliberately separate something from a group of similar items. The verb is also used when assigning part of a task to an individual or several people; for example, Courtney allotted the remaining party-planning tasks to her daughter-in-law.

Often, you will see the word allot when someone is talking about time or money: I am allotting myself one hour each day to focus on weeding the garden, or I allotted a portion of each paycheck to a local charity.

Some of the most popular synonyms of allot include these:

Examples of a lot and allot used in a sentence

Here are examples of each term used properly in a sentence:

A lot vs. alot vs. allot FAQs

What is the difference between a lot and allot?

The two terms sound the same but have different spellings. A lot is spelled as two words, and allot has an additional “l.” Their meanings differ as well. A lot is an adverb or pronoun that means “a large quantity,” while allot is a verb that means “to set aside for a specific purpose.” Alot is a misspelling of a lot.

What are some examples of how a lot and allot are used in sentences?

Here is an example of how to use a lot in a sentence: There were a lot of people at the beach that day.

Here is an example of how to use allot in a sentence: I allotted time in the morning for a workout so that I didn’t have to worry about exercising after work.

And just for fun, here is an example of both terms being used in the same sentence: Remember to allot a lot of time to finding parking in the public lot.

When should you use a lot vs. allot?

Whenever you refer to a large amount of something, it is appropriate to use a lot. Use allot whenever you’re assigning or designating part of a task, a responsibility, or an object to a specific person or group. Allot is commonly used when talking about time or money, both of which can be apportioned.