20 Pi Puns to Inspire Your Nerdiness

Grammarly
Updated on
May 22, 2019Lifestyle 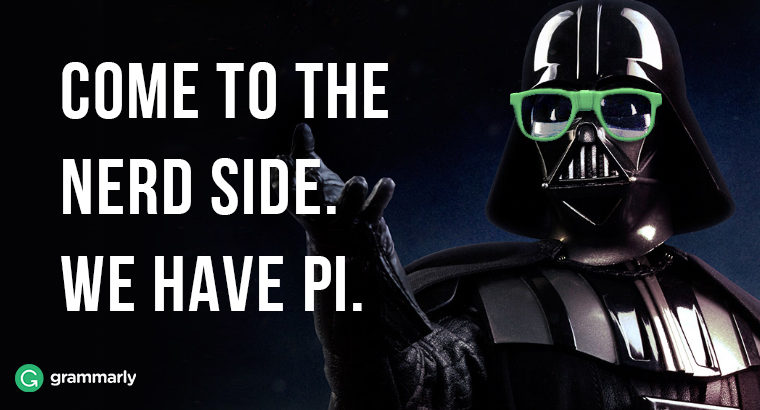 Even those of us who are not math nerds can celebrate March 14, also known as Pi Day.

Pi is a number unlike the ordinary numbers we see every day. It’s a small number, bigger than three but smaller than four. It’s a number that doesn’t have an end—if you started writing down pi, you would eventually run out of all the paper we have in the world and you still wouldn’t be able to write it all down.

We usually round pi to 3.14, and the digits that appear behind the 4 appear in a completely random, non-repeating order. It’s an irrational number, which means that it cannot be represented as a fraction.

20 pi puns for any day of the year

Pi is also a number that invites puns, especially when it’s Pi Day. Maybe a non-pun joke or two sneaks in, if you’re lucky, but it’s mostly puns—and we collected twenty of them.

5 The roundest knight at King Arthur’s table was Sir Cumference. He ate too much pi.

6 The worst thing about getting hit in the face with pi is that it never ends.

7 What do you get when you take green cheese and divide its circumference by its diameter? Moon pi.

9 What is the official animal of Pi Day? The pi-thon.

11 What is a math teacher’s favorite dessert? Pi!

12 The mathematician says, “Pi r squared.” The baker replies, “No, pies are round. Cakes are square.”

14 In Alaska, where temperatures get below freezing, pi is only 3.00. After all, everything shrinks in the cold.

15 What do you get when you take the sun and divide its circumference by its diameter? Pi in the sky.

17 What do you get when you cut a jack-o’-lantern by its diameter? Pumpkin pi.

20 How many calories are there in that slice of chocolate pi? Approximately 3.14.