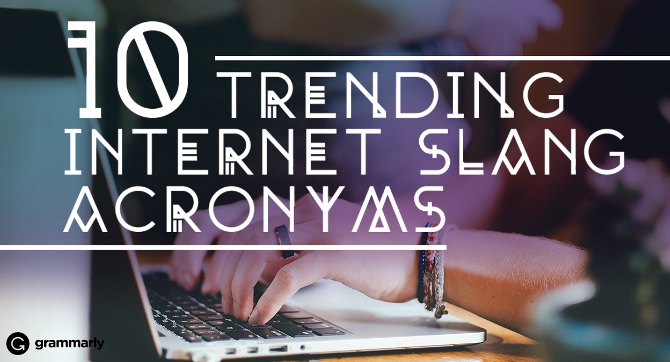 Americans love to abbreviate things and create acronyms. This is not new; for instance, back in World War 2, there were WACs and WAVES: Women’s Army Corps and Women Accepted for Volunteer Emergency Service. The war itself is referred to as WW2 or WWII, and the United States of America is regularly written as USA. In text messaging and online chatting, countless acronyms have cropped up to keep conversations hurrying along. This article and infographic will help to sort some of them out.

This first acronym is straightforward and simply shows a lack of knowledge.

“What time are you leaving?” “IDK.” “I know what time we’re supposed to be there but IDK who is meeting us.”

This can indicate frustration or any other emotion that the shake of a head can imply.

“This snow will never melt. SMH” “Dad is making me stay home! SMH” “I’m just SMH over these algebra problems.”

IKR shows agreement. Below is a sample conversation; keep in mind that this is a written discussion, or else it will seem strange. (Well, more strange than it already is.)

“We were supposed to have cheeseburgers tonight!” “IKR! I am sick of casseroles!”

Used to show happiness, this generally follows the mention of an event that was the highlight of the texter’s day.

“There was a birthday card in my mailbox and IMMD.” “IMMD when Brad asked me out for a steak.”

If you are in the northeastern United States, SNH is most likely Southern New Hampshire, but in a chat room, it indicates sarcasm. “I have tickets to the basketball game on Friday.” “Are you taking me?” “No, I’m taking my OTHER wife. SNH”

6 AMA: Ask Me Anything

Often seen on Reddit in the title of posts that invite users to ask questions, AMA is now frequently spotted in other social media networks.

“I was a special agent in Lower Scambolia during the Speckled Goat Revolution. AMA” “I have been studying for that exam all day. AMA”

In the spirit of our love for abbreviation, the best way to guarantee that nobody is going to read your social media post is to write too much. Seeing TL;DR in comments could suggest that the reader was on the way to work, about to go shopping, heading out to feed the cows . . . but probably not. Many times, we’ve started reading a friend’s post, clicked the “read more” link, then fallen off our chairs when the text shot down to the bottom of the screen.

8 ICYMI: In Case You Missed It

This is probably most often used by those who post huge messages in social media. It is also used humorously to emphasize something that is already quite obvious.

“ICYMI, my cat is sick and ruined half my wardrobe.” As a caption on a photo featuring palm trees, bikinis, and the ocean: “ICYMI, I am at the beach!”

This is used to convey extreme happiness and awe. It originates from a 2010 viral video in which a man becomes quite emotional over filming a double rainbow in Yosemite National Park.

“Frank and I are getting back together! DR!” “I got a promotion at work and have been seeing DRs all day!”

Often accompanied by a smiley, emoticon, or photo, MFW shows some sort of reaction. Famous people and viral images are popular with this meme.

Many of these have other uses (and not all are kid-friendly), so reading everything in context is always helpful. Can you think of any alternate uses for these acronyms? Are there any other text or Internet acronyms that you find confusing?

Grammar.net is about grammar and the English language, including various topics on improving your writing skills and avoiding typical mistakes. Topics include everything from grammar definitions to tricky conjugations. It’s all about grammar!